Decade Of Elegance: Combining Femininity With Fashion In The 1950s

Decade Of Elegance: Combining Femininity With Fashion In The 1950s

Travel back in time to the 1950s and revisit the fashion icons and trends that make a lasting impact on the fashion industry today. 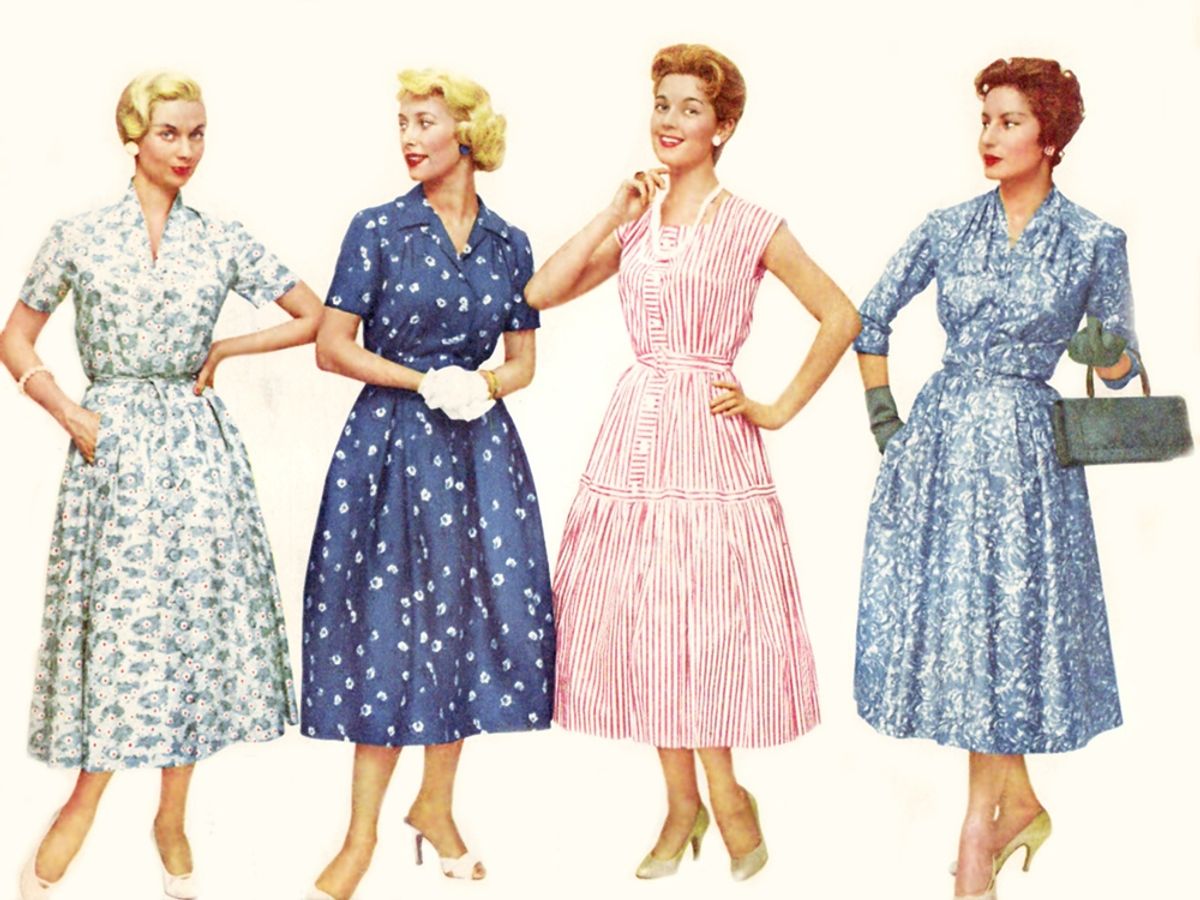 I always say that if I was not living in the twenty first century, I would surely want to live in the 1950s. Of course this was a time of rebuilding for the US, with World War II just ending a few years prior and the culmination of the Korean War. However, as far as femininity is concerned, this would have been the time that myself and many other women would have thrived in.

The 1940s and 1950s was both seen as a big step backward, yet forward at the same time for women. While their husbands were away at war, women were no longer just housewives. They were expected to leave their homes and work in factories and offices contributing to the war effort. Many also enlisted in the US Army and Navy and were stationed at military bases across the nation as nurses. They were also earning and managing their own money, which was primarily the males job in the household.

Along with war times, many things had to be rationed and regulated from food to household necessities and even clothing. Many fabrics, such as nylon, were used in the production of parachutes. Even after the war, however, clothing continued to be regulated, not in the form of rationing but by having standards and guidelines that women had to follow. Women's skirts and dresses had to be a certain length, which resulted in a slim, straight line silhouette. Along with this slim and straight style, emerged the shirtdress, a popular dress style that is still popular to this day.

In 1947, Christian Dior changed the fashion industry with styles that were never seen before. The fabric was luxurious and flattering, rather than tough and unforgiving. Shoulders no longer had the sharp angled shoulder pads, but instead were soft and rounded. The new popular skirt length hit right at mid-calf and bodices hugged women to give them a slimming look at the waist.

Dior's designs outraged women across the US and protests were held over the new collection. The new clothes were made with a lot of material, needed constant maintenance, and a full entourage of accessories to be considered fully completed. However, by the start of the 1950s, nearly every woman was sporting the new look.


By the 1950s when Christian Dior's new style was in full swing across the nation, women went back to the traditional house wife lifestyle, since their husbands were home from war. Many people flocked to the suburbs where they built their forever homes and raised their families. The economy was booming and rather than saving, women went on shopping sprees and built up their wardrobes. Their appearance was linked to their husbands success. Even if they were not wealthy, looking the part meant everything in this new society.

The new 1950s look was seen as being glamorous, mature, and very put-together. Women were expected to be dressed flawlessly every time they went out in public and when their husband was home. Outfits were always to be coordinated with matching hats, belts, handbags, jewelry, and shoes. Velvet, tulle, silk, and satin were the popular fabrics. Casual daywear clothing was made of cotton and wool and polyester and rayon were used to make a variety of clothing from blouses to dress pants.

In 1954, famous designer, Coco Chanel, hated the new style clothing from Christian Dior so she decided to release her own clothing line. She designed boxy, tweed jackets with no collar, and slim fitting skirts that hit just below the knee. She finished the look off with coinciding jewelry, other accessories, and her famed quilted Coco Chanel bag.

After a rather dull decade for clothing due to war restrictions, bright colors soon made a comeback midway through the 1950s. Big, fun floral prints and stripes soon returned to the scene. Often placed on a white or black background, patterns and prints were usually paired with a simple, solid colored shirt. Three quarter sleeves, polka dots, and embroidered skirts, such as ones with the well-known felt poodle on them also emerged in the latter half of the 1950s.

In order to fully complete an outfit, women piled on coordinating accessories from head to toe. Well-dressed women wore elbow length gloves with formal or evening wear, which included short sleeved dresses or strapless gowns. Smaller hats that complimented outfits also became popular. Many were worn in the spring and summer and usually came in pretty pastel shades. Another fashion statement was the emergence of glasses. Frames came in an assortment of colors, showcasing the cat-eye style with pointed or flared edges. Jewelry was a classic statement to any women's ensemble. Pearls were often worn around the neck, along with slim watches, subtle rings, and clip-on earrings. Finally, shoes were the accessory to complete the outfit. High heels, particularly ones with a peep toe, were worn for dressy and formal occasions. Espadrilles, worn for comfort and style, were popular in the spring and summer during vacations to the beach and tennis shoes were worn around the house and outside.

This new look in women's fashion lasted throughout the 1950s and made a huge impact on both society, particularly for women, and the fashion industry. The high-maintenance flare of the 1950s soon gave way to the rebellious, carefree vibe of the 1960s and 1970s and fashion lost its elegance. 1950s fashion has left a lasting impact on the world of fashion as we know it. Many of the most popular styles have made a comeback within the last few years and are now popular again today. Espadrilles are still worn as a spring and summer shoes. Tea length dresses are becoming increasingly popular again, especially for weddings and other formal events and the high-waisted short and skirt style is still going strong. It is important to look at where the origins of our fashion and clothing styles have come from and connect them to the past, for many of the styles today would not be in existence without fashion pioneers like Dior, Givenchy, or Coco Chanel carving a path for decades to come.