Let this election energize you to fight bigotry at every turn. 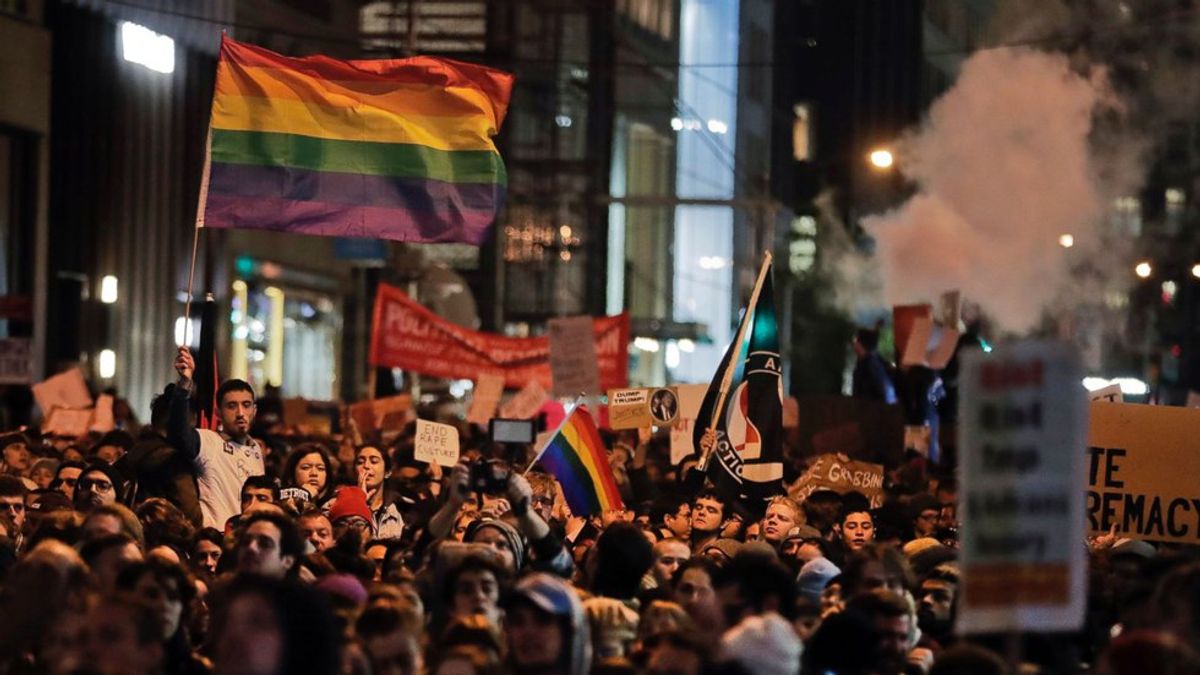 This election has left many of us in a state of fear, agony, and shame. We fear for our lives, as our new President-elect is the same person who said the U.S. should bomb the families of terrorists. We fear for our family members, as Donald Trump has threatened to deport 11 million immigrants. We fear for our healthcare that may not exist after a Republican-controlled Congress repeals the Affordable Care Act. We are in a state of agony as Trump supporters around the nation are emboldened. We hear and experience violence. Two white men pulled a gun on a Black lady at a gas station. The KKK have already planned a rally for Trump. Kindergarteners chanted, “build that wall!” at a classmate of Latino descent. The stories litter our Facebook and Twitter feeds, bringing us to tears as our very lives are put in jeopardy by those emboldened by this past election.

Instead, we should stand by our beliefs and protect each other. At every attempt to dismantle the fabric of minority communities, we must stand united in unshakeable resistance to any discriminatory actions taken under the Trump presidency. A plan to ban Muslim immigration must be met with fierce opposition, demonstrating that we will not give in to dangerous generalizations of our Muslim friends and family. A plan to deport 11 million people must be met with a determined resistance, revealing to the world that we will not simply stand by while the law enforcement sworn to protect and serve tears our family apart. The fight is in our hands.

One often-ignored story from the election is the down ballot votes. Of course, things may look bleak when we see a Republican-controlled Congress, but we can look even further. Ballot initiatives in 35 states made medical marijuana legal and recreational marijuana was passed in other states. This is an awesome step in our never-ending fight against police brutality, as those initial prohibitions were installed to criminalize Blackness and start the failed War on Drugs. America elected Trump, but we fought against the criminalization of people of color through ballot initiatives. We should be proud, but not satisfied. This of course will not end mass-incarceration, but it demonstrates that our ideas are popular. Not only for that reason, but we must also fight to continue implementing progressive policies because we know right from wrong and it's up to us make our nation and our world a better place.

Over the next two years, we need to continue to ensure that a Trump presidency does not threaten the lives of our families. We must continue to fight against police brutality and white supremacy. We have made major advancements, and we need to continue fighting. Do not force yourself to move on and accept these results. Rather, fuel your inner fire and rage, and fight for a more equal future, where we are all respected and valued citizens of a country that doesn't treat its minorities as burdens or scapegoats. It is worth noting that if millennials were the sole group to vote, Trump would not be president. We are the future, and it’s time to ensure that that future is a morally just one that suits the interests of all our citizens and each of our distinct cultures and communities. We alone must guarantee that our future welcomes all of us.