A Dark And Fast History Of Elephants In The Circus
Odyssey

A Dark And Fast History Of Elephants In The Circus

You may want to think twice before you ‘step right up’ 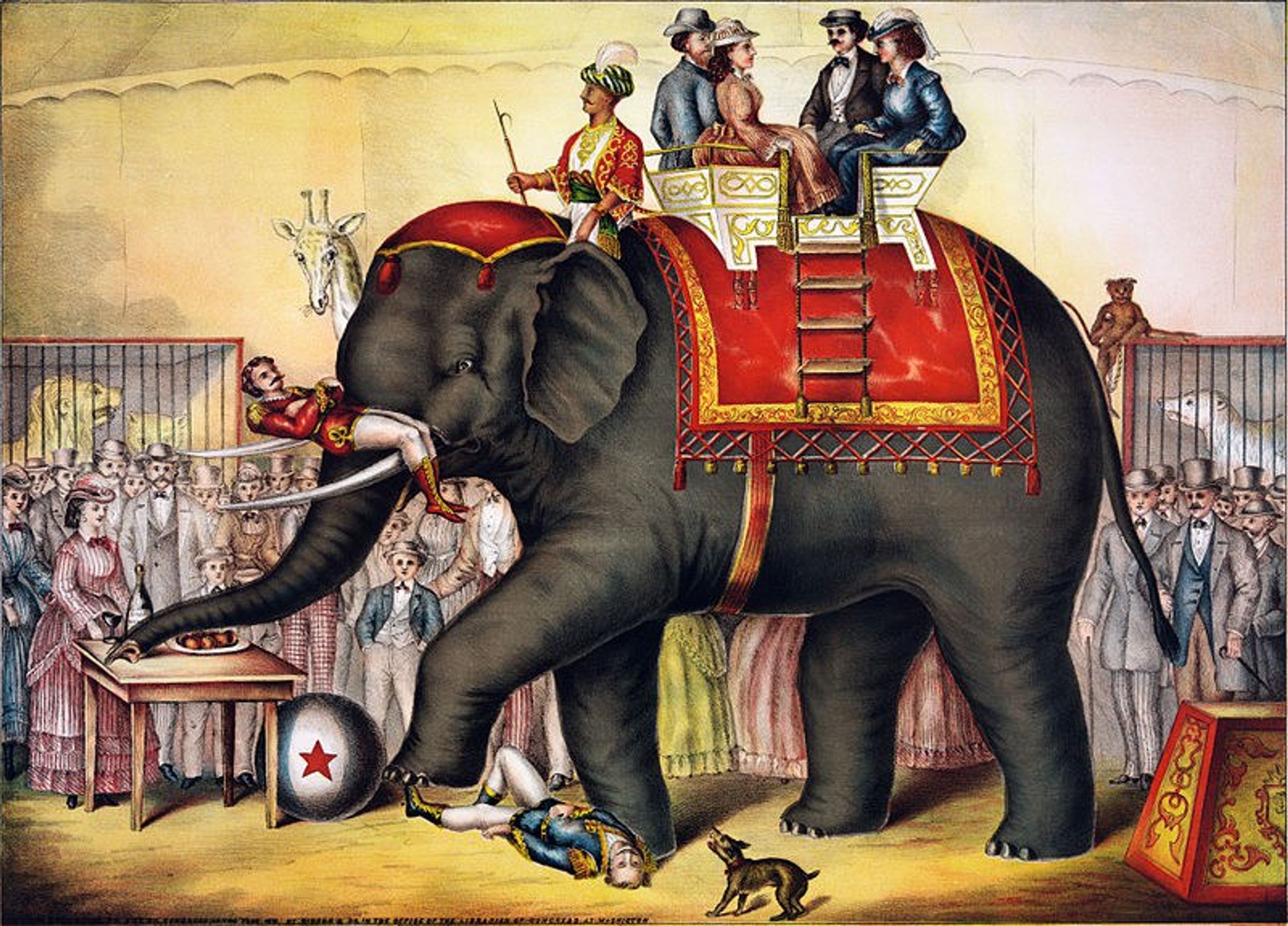 On May 1st, Ringling Bros. and Barnum & Bailey Circus made good on their promise, and retired their eleven Asian elephants from the shows. The elephants will now reside in the owner of the circus’s 200-acre conservation center, according to CBS News.

While this is a huge step for entertainment animals, I couldn’t help but wonder why these majestic creatures ever became a part of the circus to begin with. What I found was a gruesome and upsetting history that is, unfortunately, not all that surprising.

This is the short, fast and disturbing past of elephants in the American circus.

Now that you know the ending, let’s go back to the beginning: 1808, Somers, New York. A man named Hachaliah Bailey (of Barnum and Bailey’s fame) bought an African elephant with the intention of it being a farm animal. I’m sure you’ve realized that this elephant became much more than a farm animal. “Old Bet,” as she was called, became the first circus elephant in the U.S when Bailey decided to charge people to get a glimpse of her. Eventually, he started traveling around with her, which resulted in her death in 1816. She was shot by a farmer who believed it was disrespectful to parade an elephant around for show.

From the beginning, violence was intertwined with the show for the elephants.

In 1903, a circus elephant named Topsy was electrocuted for having killed three people. Topsy did not survive the electrocution. Maybe this could be seen as justified since Topsy killed three humans, but studies have shown that animals living in captivity can develop a psychosis, causing them to be unnaturally aggressive. Not to mention, abuse definitely doesn’t help.

Shortly before this, the circus was accused of elephant abuse, involving the use of bullhooks. A bullhook is essentially a crow bar with a sharp hook at the end. This tool is often used to “train” the elephants, aka beat them, instilling the fear of God in them so that they do the stunts as commanded.

On top of using bullhooks, it was common practice for the elephants to be chained for up to anywhere between 12 hours to a full day at a time. Being chained like this can cause psychological distress in elephants, understandably.

Thankfully, Ringling Bros and Barnum & Bailey Circus have put an end to this for their shows, but circuses around the world haven’t. Animals who are forced to perform often suffer through similar violence, causing them physical and psychological trauma.

My greatest hope is that the next time you see some sort of animal-centric show, you think twice about what it must take for them to be there. But also, I think we should celebrate that Ringling Bros. and Barnum & Bailey's Circus took this giant step to retire their elephants after over 100 years.
Report this Content
This article has not been reviewed by Odyssey HQ and solely reflects the ideas and opinions of the creator.