Where Does Cyberbullying In School Start... And Where Does It End?
Odyssey

Where Does Cyberbullying In School Start... And Where Does It End?

So where does the real problem lie and where do we go from here? 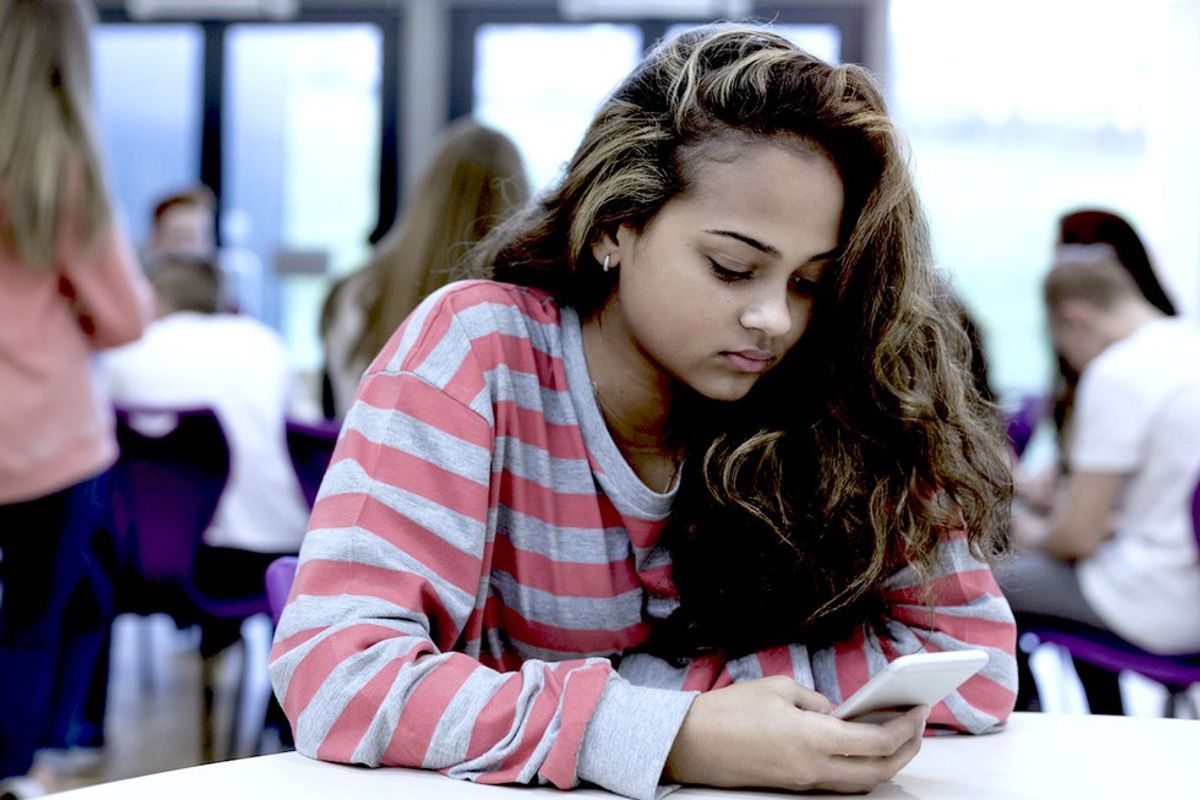 “Your (sic) fat, your eyebrows are bushy caterpillars and no one likes you.”

This grammatically incorrect statement landed in my Tumblr inbox, anonymously, December of my sophomore year of high school. I was studying for my exams when I got the notification and as I read it I felt two things: one, I felt bad for this person because they used the wrong form of your and two, I was devastated and crushed that someone would send this message to me.

Being bullied was something that never lacked in my life and as it happened to me, I noticed that it happens all around. I started hearing about it from people I would share my story with, and eventually, stories will end up on the local news, typically with more traumatic and tragic endings. For example, in my hometown, a student was beaten and forced to lick a push pop that had been wiped in a urinal.

Bullying and cyberbullying garner a lot of media attention with little to no change from administrators or students themselves. All states have laws against bullying but that doesn't stop the issue from occurring. Students are quick to say negative things about another student to the point of injury, and these are the same students to say how sad they are when something tragic inevitably happens.

The advancement of technology has allowed for bullying to be more than just in person. Now bullying can take place physically, but also online. Cyberbullying has become a large problem in schools because of the ability for it to be off campus. Students can now post degrading things about their classmates online at home, which means the school has no jurisdiction over it. This not only causes problems for the student being bullied but it also causes problems for the school. The parents may want something to be done, but the school cannot intervene in life at home.

Cyberbullying is more harmful than being bullied in person. People tend to be braver online than in person which means they will say more on the internet than they would have if they made a comment at school. This leads to more viscous attacks through words and maybe even videos or photographs.

According to dosomething.org, 43 percent of kids have been bullied online and 1 in 4 of those kids have it happen more than once. This means that nearly half of the students in school experience some form of online bullying from their peers. Bullying is not only victimizing but also isolating, which means kids who are bullied won’t tell a trusted adult.

The problem does not only lie with those that are doing the bullying. The other part of the problem is the lack of people standing up for those that are being bullied. Ninety percent of teens say they have seen cyberbullying online and have ignored it. Dosomething.org also reports that 75 percent of students will visit a website that bashes another student. So not only are students watching this tragic event happen but they will also actively participate by reading what is being said by the bully. It’s no wonder that victims of bullying are 2 to 9 times more likely to consider suicide.

Students are bullied for a number of reasons. It can be because of race, religion, gender, sexuality and more. This causes students to experience lower self-esteem, they begin self-harming, they experience mental disorders and illnesses such as anxiety and depression, they consider attempting or attempt suicide and some even bully others simply because it happens to them.

The fact of the matter is that cyberbullying is a very real threat to the morale of students and the school environment. People don’t realize that their actions online hold very serious consequences and as a result, they hurt many of their peers around them. So where does the real problem lie and where do we go from here?
Report this Content
This article has not been reviewed by Odyssey HQ and solely reflects the ideas and opinions of the creator.

Kassie Hsu
Baylor University
2768
Panda Whale
Here are 100 things I'd rather to than study. I know the semester just started, but
Featured