Giving my new jeep the characteristics of a horse. 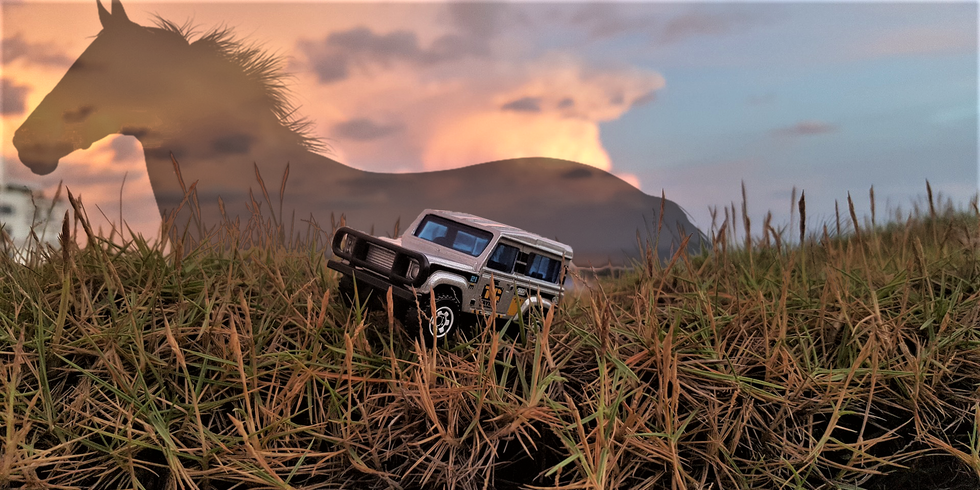 After handing over the cash I saved for the title of the vehicle, I no longer became one of the only people in my family to not own a vehicle. I scoured the cabinet below the sink for the Windex and Woolite spray-bottles. I also took the portable vacuum cleaner from nearby the back-door. A small part of me became uplifted at the prospect of finally being able to possess a vehicle within my own name and my own privacy; but I mostly felt anxious at acknowledging that I would need to maintain it.

My aunt and I walked outside to see the 2004 Liberty Jeep. The metal stallion, black and with brown leaves resting on its buggy-like exterior, rested inactive and dormant since she transitioned herself into her new vehicle. She decided to pass down this Jeep, not out of some authentic tradition typical in German-American culture, but because she wanted someone within the family to take care of it.

She held the black, oval-shaped remote transmitter which she showed me. Although I was used to driving my mother's Pontiac, I was looking forward to being able to operate the Jeep.

"This part here unlocks it." She pressed the opened lock icon, which caused a clicking sound from the Jeep.

"This part locks it." The Jeep honked.

"And this is the panic button." The icon with "Panic" written on it made the Jeep honk continuously with brief, silent intervals until it was pressed again.

Since this became my vehicle with my grandma, two uncles, and mom as witnesses, the first step I took involved cleaning out this Jeep. There is a thrill in cleaning and organizing someone else's vehicle, for it requires braving and exploring a blank spot on a map, which inspires a sense of exhilaration and danger. With the plastic Shop-Rite bags for storing whatever belonged to my aunt and the gloves I wore, I went inside.

Just in the front of the Jeep, I managed to find lip-sticks, business cards of salons and Harley-Davidson, razors (fortunately I wasn't cut), information about the Jeep and my aunt's insurance, and change; lots and lots of pennies, dimes, nickels, and quarters which tinkled into a glass jar that I needed to retrieve from inside the house. When I went to the backseats, I discovered two fuzzy softballs and a deflated beach-ball. I always known my aunt as possessing an adventurous character who spent her free time driving to all sorts of places. These objects that I scavenged became proofs of her nature.

I brought three bags-worth of stuff into the house, including a fuel system cleaner, which I was told by my mom, "This is very important."

Where the Woolite was needed was an area in the floor that the back-seats overlooked. The source of a rank smell within the Jeep came from what appeared to be some sort of dried-up liquid. Perhaps a food or a drink? Regardless, the chunks I could not vacuum I sprayed with the white-and-silver foam and spread about with the barbed brush. I repeated this two times.

The nozzle of my vacuum cleaner scoured the carpets of the floor and the cushions of the seats for sand and dirt. I vigorously ruffled the carpet of the back to suck in every single particle I could. My aunt always drove this Jeep to Toby Keith concerts and the beach, which was why sand pervaded the floors with an unrelenting clinging.

I sprayed the green, pollinated windows with the citrus-scented Windex. I wiped carefully the wind-shield with a glaring crack that caused me to deeply consider whether I should even let my aunt pass down this vehicle to me or just sell it to someone else. That flaw caused me to as much worry as trying to financially maintain it. It caused me controversy with my mom when I told her, "I'm thinking about this problem in the long-term."

And she responded, "I know someone who can get the windshield fixed."

Before she left for her apartment, my aunt looked through the window to the back-seats, focusing in with her hands over her eyes. "It looks brand new."

She embraced the back of her former Jeep. "I'm going to miss you," my aunt squealed with the childish spry that she seemed to continue to effuse in her early 50's.

"Ten years. That was how long I've had this Jeep." I remember riding it, feeling it glide down roads of various bumpiness. From its design, it can be driven for on-road and off-road use. What makes a metal horse so admirable is its tires can gallop upon any terrain.

When I was done, I saddled in the front seat to acclimate myself. There it bedazzled within me a new sense of pride in taming my own vehicle; the same that could be had for a Mongol warrior riding his horse. I stayed inside my metal horse for hours while my family conversed inside the house.

The only light I needed for reading The Fellowship of the Rings by J. R. R. Tolkien pierced from the sun through my side window, halfway down to let in the cool autumn air. I read the part when Frodo and his friends came across the mushroom farmer he had trouble with as a young hobbit.

While Frodo was destined to leave Bag's End as part of an unclear mission, the destiny that may impact me is taking ownership of my aunt's Jeep. I never wanted a brand new car, especially when it comes to the joke, "Once a brand-new car drives out of the dealership, it's already used." Although I'm unable to remember where I heard it, I still feel that I always held the responsibility of managing my own metal horse. Part of this includes grooming it.

From Your Site Articles
Related Articles Around the Web
cars
Report this Content
This article has not been reviewed by Odyssey HQ and solely reflects the ideas and opinions of the creator.