Could John Kasich have brought down the GOP?

Could John Kasich have brought down the GOP?

Why John Kasich made a mistake not endorsing Donald Trump. 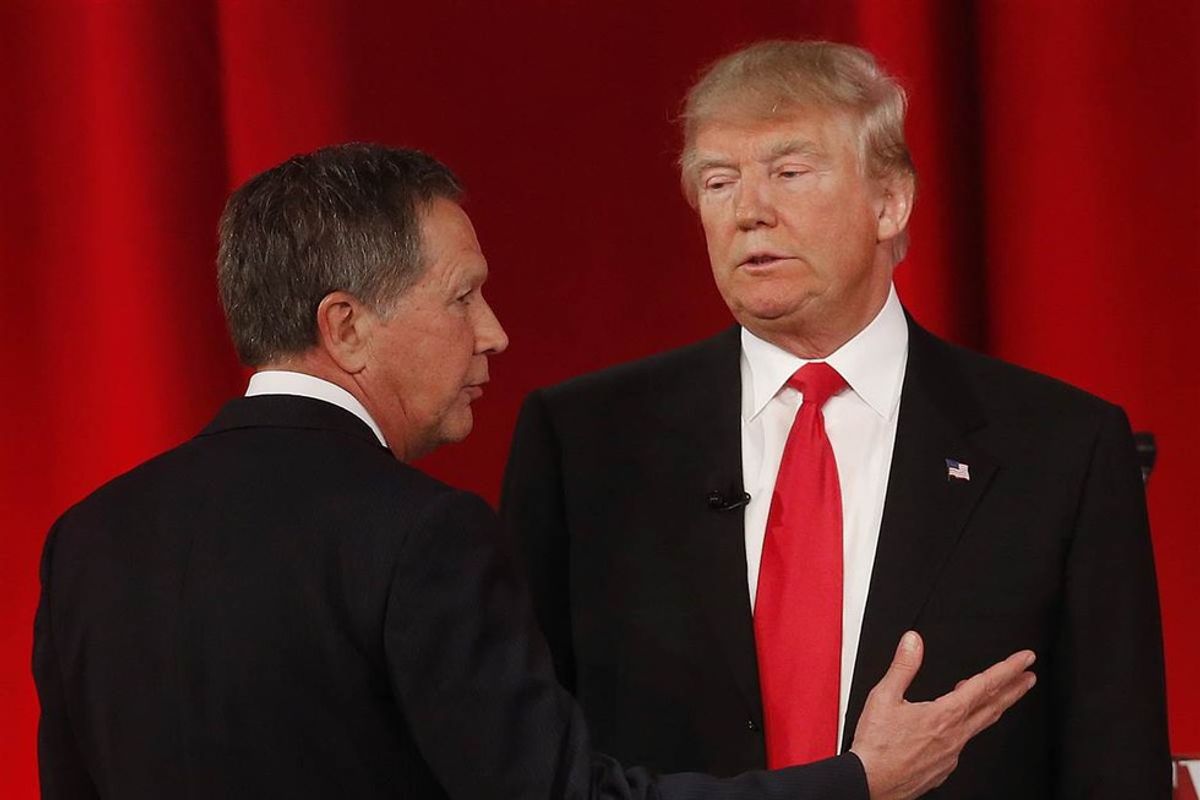 Try to solve this riddle. John Kasich is the Republican Party governor of Ohio. The party's convention this year was in Cleveland, the state's second largest city in population. And Kasich is not willing to endorse Donald Trump for President of the United States? This riddle is complex and embarrassing for the Republican Party.

So much is at stake in this election, more so than any election in the history of this county. A couple of Supreme Court justices must be named by the next president (granted President Barack Obama nominated liberal Merrick Garland, who will probably not be confirmed this year by the Republican Senate). You either have Hillary Clinton, who may force all Americans to be pro-choice, and gut-punching news for the Republicans if she becomes the first female President, or tough-guy Donald Trump, who will appoint justices that uphold the U.S. Constitution. You also have to wonder if the next president may just be a war-time president.

So why has a capable man like John Kasich, who is respected across Ohio, and has stances much closer to Trump over Clinton (obviously), not attended nor endorsed Trump at this convention? Listen mates, the facts are straight. No Republican has ever won a presidential election without carrying Ohio. The state as good a balance between metropolitan and rural areas as there is in the country and is a good indicator about who wins the electoral college.

Let's face it: If Trump cannot win Ohio, he will lose the election, no questions asked. Furthermore, the United States of America may be in the same situation the Roman Empire was in the fourth century, A.D., falling apart on all fronts, literally and figuratively. Such as corruption by leaders, an ailing defense against Germanic tribes back in the late 300's A.D. to mid 400's. Even people back then thought Rome would never fall, but it did in A.D. 476, and ushered in the Middle Ages. That is a situation I fear will happen if the Grand Old Party doesn't unify in time for November 8th.

Kasich should have been a presence as the governor of his home state, his party's leader in the state that hosted the convention, and was unable to succumb to a vision that Donald Trump laid out in its whole to address the many issues that face the country today, a speech I felt hit out of the ballpark.

I want this country to succeed as champions of western civilization, and show the bright potential of America can in fact come to fruition. President Abraham Lincoln could not have said this about the country I love any better: "A government of the people, by the people, and for the people shall not perish from the earth."

My hope is that Kasich, and the rest of the true Americans are bailed out by a vision, that quite frankly, is the widest in a long time to come.

If he does not win America's most important election since 1860, in my view, who deserves blame? I probably will not be able to dissect the answer until after the election is over.