Why Corinne from The Bachelor is Bad For Girls Everywhere
Odyssey

Why Corinne from The Bachelor is Bad For Girls Everywhere

This show is a disaster for all women. 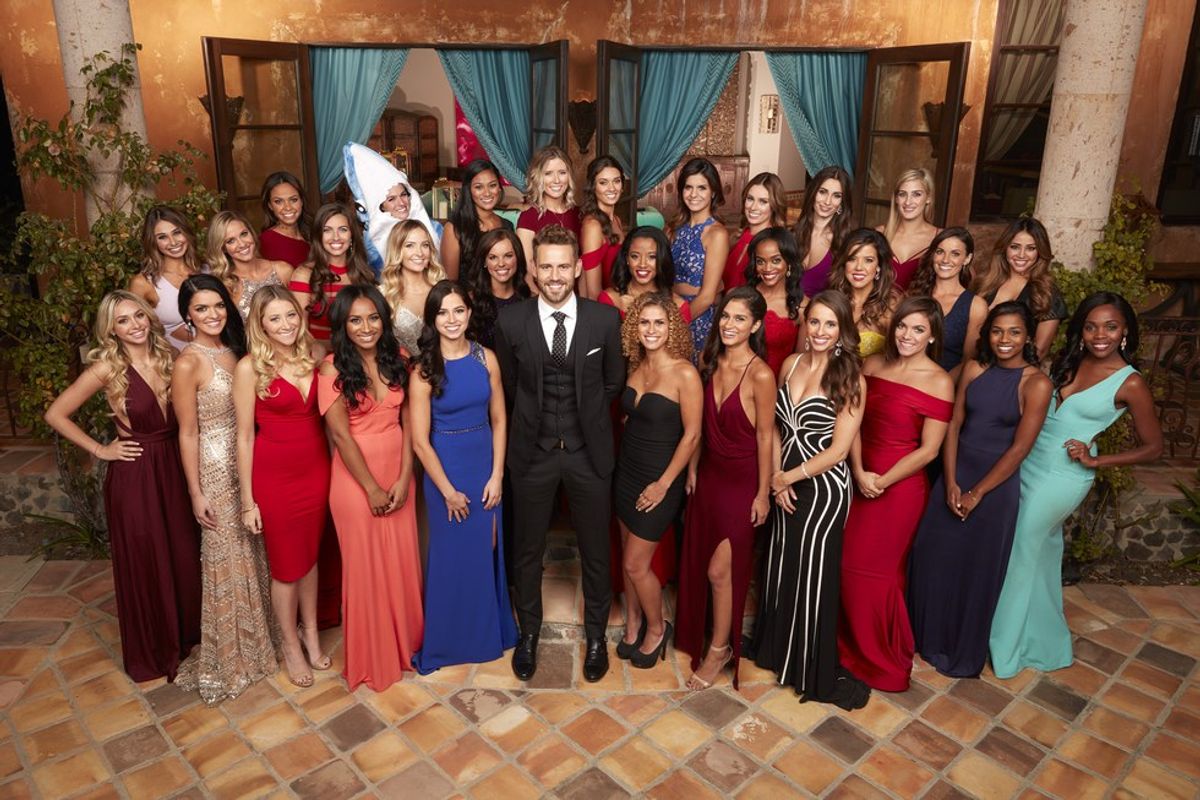 In an effort to become a more versatile writer, I have decided to provide a commentary on the disaster entitled, The Bachelor.

Just kidding. That's not why I'm writing this at all. After watching the show, I was genuinely disturbed by all that I saw, and I feel that a lot must be said about the premise and happenstances of this show.

I began watching the Bachelor after seeing the ad on a TV at the gym, and after seeing how much attention it has grabbed on snapchat as well. I feel that it is necessary to say that such a show is greatly out of element for me, and I definitely prefer "my" genre -- OITNB, Narcos, Grey's Anatomy, Scrubs, The Mindy Project, etc --you know, television of at least some substance. However, again, when I saw the fuss everyone made over social media (especially over one potential suitor for the Bachelor), I knew it was something I had to watch.

Of course it is necessary to explain what I expected from the show in order to reveal my disappointments. I thought I understood the premise of the show -- love-struck individuals who could not seem to find the right person would be nominated for the show (Nick, in this season), where they would swim in either a sea of women or men in order to find the person that they felt is right for them (the 30 women he is "dating").

I knew there would be some degree of drama, seeing as everyone is competing for the same person. I did expect there to be many heart-warming moments, and some heart-break...

One of the most demeaning and humiliating shows known to man.

This show suggests there's a way to actually FIND love.

This show relies on the premise that love is something to seek and work towards. I find this extremely delusional. For all the pre-teens, teens in between, and young women, they may feel that in order to find love, they must actively go out to engage and find it. However, I disagree. Obviously this view varies from person to person, but it is unfair to impose the view that women or men need to put themselves out there in order to find love. It could also be something that just happens, or comes to you.

This show is a game show. Sure, its a reality show according to the TV Guide, but everyone knows that this is a game of survival. Who can figure out how to spend the most time with the Bachelor, at the right time, doing what he loves? Who knows what questions to ask the Bachelor, or what answers to give him to please him? Who can outdo their competitors in appearance or romance?

In my opinion, although the women say very different things in their brief dialogues during the show, I find it impossible to believe that any of these women, having not known much about the Bachelor prior to the show, know enough about him to want to spend THE REST OF THEIR LIFE WITH HIM. This show is a competition, and may the best woman win, unfortunately at the cost of a marriage and two lives that may have ended up differently and possibly happier.

This show is a disaster for all women.

I pity the women on this show. After seeing them introduced at the beginning of the season, I really did appreciate how diverse the women were (not that 25 women with 3 non-white women who all have the bodies of models is diverse in any sense of the word) in interest, and how they have somewhat real personalities. They all seemed (I say seemed because I could also be under the hypnosis of all things ~The Bachelor~) to have their own goals and aspirations, and just wanted to find someone to spend the rest of their lives with. However...

As they all compete for one man's love, they obviously have their moments of insecurity and uncertainty where they're not sure if they'll be enough for the Bachelor, and I find this so unfair. If you are looking for a husband or a serious relationship, you, these girls, nor absolutely anyone should be subject to watching him romance other girls and treat them perhaps better than he treated you. No woman should have to make herself so vulnerable. No woman should have to compete for a man's love, because if you were ever in question, he never loved you in the first place.

* Just in case you are not acquainted with the show, maybe you should familiarize yourself with the major events of the show, which include the rose ceremony, individual dates, group dates, etc. *

But, Corinne seems to be my biggest issue. A lot of people hate her, and while I did too, I very quickly realized that she is just a young girl, who thinks of herself more as someone's girlfriend more than as a wife. She uses her body to get Nick, which is my biggest issue.

Corinne, I think, is what gives women a bad name. Women are often accused of seducing men with their bodies, and the way in which she has done this and has caused so many other women to be equally as scared and vulnerable is despicable, even on the show. Whether its on TV or in real life, no woman should have to use her body to get a man, and if she does, that man doesn't love her. He only loves her body, and that's the truth.

Not forgetting to mention, Nick is equally nothing but a piece of trash. Despite many of the other "women", as he calls them, telling him that they feel cheated of his attention and time because of Corinne and her questionable actions, he justifies her behavior by saying that they have a "physical connection" and "chemistry". Get real, Nick. You are not fooling anyone.

Nevertheless, Corinne is truly a disaster for all the young women watching this show. She encourages excessive sexual promiscuity in order to "top" her competitors, maintains a mercurial temper (and while knowing she has one, still acts this way), is a hypocrite in that while she criticizes girls for certain actions she has absolutely no problem doing the same thing to the other girls, and expects Nick's love if she offers him her body. NONE of these things are ideal for a woman, and definitely do not send the right message to young women.

If you're a young woman reading this, I want to tell you that you are beautiful and special. You are worth more than competing with thirty other women for one man's love, one man whose attention you have to fight for. Keep at it, keep building yourself to be the woman you want to be, and the right man will come to you. Never, ever, ever compromise yourself and your values for the sake of a man, or love. Never.

To be honest, I wrote much of this in anger, and so if I am incoherent in speech, I apologize. I would happily chat about this topic, and well, you'll definitely be hearing from me after next Monday at 8 PM!