Confessions Of A Teacher's Kid

Confessions Of A Teacher's Kid

"This isn’t a political statement. This is a teacher’s child telling the truths that are a part of our lives." 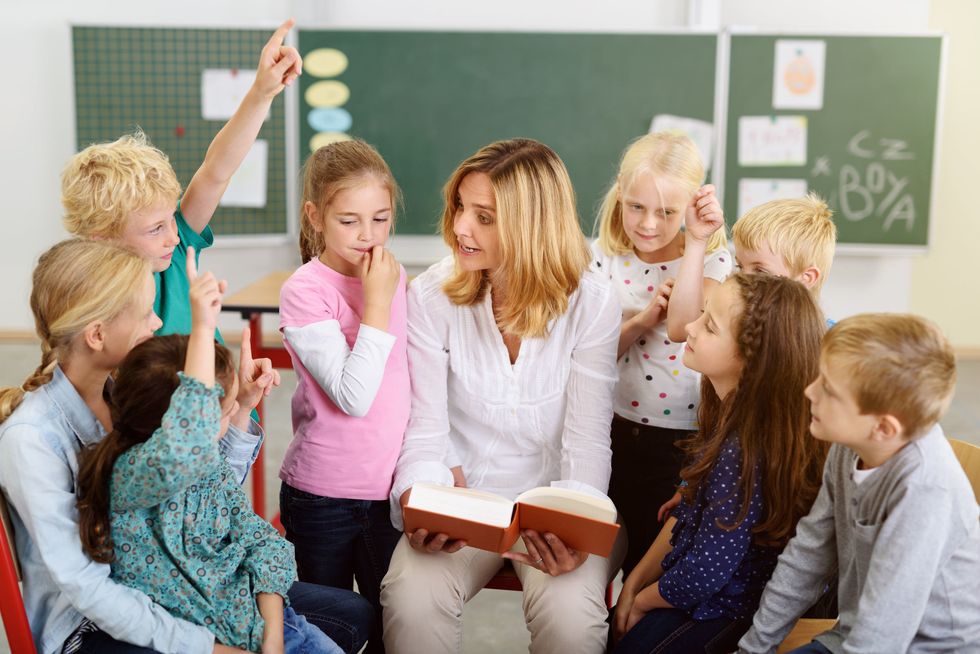 Being a teacher seems to be a profession that leads those they interact with daily — the students, the parents, the public eye and social media — to believe that they aren't a person anymore, or that it's just a job to them. Most young kids are shocked to see their teacher at a grocery store, or walking around their neighborhood, 'What do you mean, you don't live at the school?!' they undoubtedly ask. Most adults don't realize that spending eight hours on your feet all day and another four prepping and grading isn't something people choose to do unless they love it. A picture is painted that when a teacher goes home, their mind goes back to their 'normal life' and they lose the emotional attachment they have during the day, as if they're simply playing a role.

As the child of a teacher, I can tell you that such a picture is completely false.

It's impossible for me to ignore the fact that my mom, a kindergarten teacher, cares so much for every single one of her students, even after they leave her classroom. No matter what happens, she treats them like she treats me. In fact, she doesn't call them her students, and never has. She always refers them as 'her kids,' in the same manner that she refers to my sisters and I in everyday conversation. Despite not being her biological children, every fiber of her being loves and protects those children. For eight hours every day, five days a week, my mother is in that classroom watching her kids learn and grow into positive members of society; she advocates for them, teaches them to be kind to others, feels their foreheads for fevers when they look sick, and so much more. When they face fire drills and lockdown drills (some of which aren't drills at all) there is no doubting that she would risk her own life to save theirs. And she isn't the only teacher who does and would do such things. In fact, she's a part of the vast majority.

And, for the sake of being honest, I'll admit that I've been jealous because of this.

When your parent is a manager, a CEO, a mechanic, or even a doctor, there isn't an emotional attachment that rivals the one they have with their children. But when your parent is a teacher, they spend their whole day with kids that they love. And it might not be the same kind of love that you have for the children you've brought into the world. But when I see the gleam in my mom's eyes as she describes how a student could finally write their name or passed their unit test, I know that it's just as strong.

It's this love and emotion that drives my mom to do so much extra work. Her job isn't done after 3 o'clock when school gets out. As I've come to discover, a teacher's job is never really done. Between the constant emails to parents and the school staff, grading papers and making report cards, and setting up the schedule for the next few days, teachers don't get a break. And if they're like my mother, they don't want one.

Something that's both endearing and infuriating about being a teacher's kid is that they never seem to leave the classroom, even if they're sitting in the living room. I've come to understand that if my mom's typing on her phone, she isn't texting, she's sending emails. If she's scrolling on her phone, she isn't on Facebook, she's on Teachers Pay Teachers finding new learning centers for her class. If, on the rare occasion, she's actually on Facebook, she's usually on teaching groups talking with other teachers and parents about… well, teaching. I've been on Pinterest in the early hours of the morning and found a classroom activity that she pinned at midnight the previous day, when she should probably be sleeping (because teaching isn't easy, it's exhausting). And sometimes it's super frustrating, because there have been times when I'm trying to talk to her, but she's busy doing all of that and wasn't listening. But it's also so inspiring, because I can see how much her job means to her and how much she loves it. And that isn't something you get taught when you earn that degree, that's something that comes from the deepest depths of your heart.

SEE ALSO: The Thank You My Dad Deserves

In truth, I'm so incredibly proud to be the child of a teacher. It's hard sometimes, having a parent with a job that doesn't have a stop or end time. It's hard when you want to talk to them and they're still at school getting ready for the next day. It's hard because you know that you're not the only kid your parent cares for anymore. But when you hear about the great things your parent has taught those students to do, it's also hard to be upset at all. When you see the cards and gifts that come in during the year, with messy 'I love yous' written across them with best-guess-spelling, your heart swells because you know your parent is making a difference in those kids' lives. They're forming the minds and hearts of the future, the fate of the world is in their hands, and they meet that challenge with broad smiles and a cheerful 'good morning' to every student that steps through their door.

This isn't a political statement. This is a teacher's child telling the truths that are a part of our lives.

Teachers aren't robots, they're humans. Sometimes, they seem super-human. They love their students, their school, and their job. And while it isn't always easy for them, they would never want to be anything else. As a teacher's child, it isn't easy for us either. But nothing is quite as amazing as watching our parents do what they were born to do.