A Lesson In Getting Comfortable With Being Uncomfortable
Odyssey

A Lesson In Getting Comfortable With Being Uncomfortable

The experience of inter-group dialogue is something every student should have. 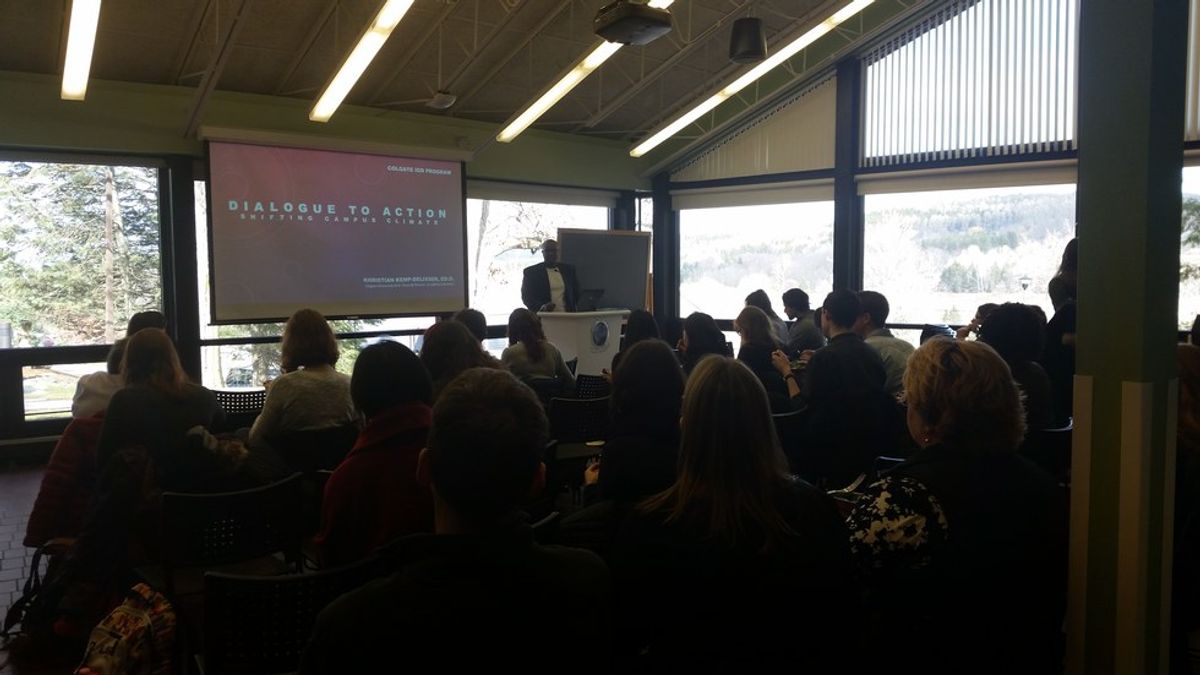 For the past five weeks, every Monday at noon, I’ve gathered with primarily strangers in a confidential space and talked about challenging topics including white privilege, hidden disabilities, islamophobia, restorative justice, and turning dialogue into action. I wouldn’t do these events and their subject matters justice to try and summarize them in an article for those people who didn’t attend, so instead I think it’d be prudent to highlight the overarching takeaways from my experience in this series deemed “Colgate Conversations”.

Here’s how these dialogues went. You’d go in and find a seat, and the person leading the talk would either lecture briefly or conduct an interactive activity that introduced the topic at hand. Then, we’d be directed to turn to those around us and talk about our experience with the topic. Next, we’d regroup and people would share what they talked about in pairs or groups. To conclude, the speaker would give a few closing remarks or takeaways regarding the conversation that had been held. This is a process known as Inter-Group Dialogue. To quote from the event poster, “Intergroup dialogue (IGD, sometimes called intergroup relations, or, IGR) is a method of inquiry that promotes active listening and constructive dialogue around difficult topics such as race, gender, sexuality, ability, and other important issues. Both facilitators and participants remain attentive to cognition and emotion, commonalities and differences, individual perspectives and systemic realities.”

First of all, every conversation, without fail, made me feel uncomfortable. The topics were ones I hadn’t openly discussed if I’d even thought about them before. I didn’t know the people I was talking to. It was highly personal. Yet, every week I went back. I didn’t go back for the catered lunches. I didn’t go back because I thought people would notice if I were absent. I didn’t go back because I had nothing better to do. I went back because I came to Colgate to get out of my comfort zone. Now it can be discomforting at Colgate to walk into the crowded Coop at lunchtime and not know where your friends are sitting, but I mean discomforting intellectually. That first talk was prefaced with the acknowledgement that it might be uncomfortable to talk with those around us about such a hairy and personal issue, but that we were going to do it anyway.

By the end of the series, I had cultivated a newfound respect for Inter-Group Dialogue (IGD). Believe it or not, every member of the Class of 2019 here at Colgate has participated in IGD. During our freshmen orientation, we held an IGD regarding our summer text and its overlap with issues of identity and privilege alongside our FSEMs, links, and a faculty member. I didn’t know that at the time, but now I think that it’s a great way to teach new Colgate students what they should feel free to do in classrooms and across campus.

IGD is structured, but IGD is essentially what we practice in our friend groups. Not when we’re talking about what we had for lunch or about what so-and-so did on what’s-his-face’s snap story, but in those moments that so frequently happen where conversations devolve into the serious, and we share our ideals and positions on things that matter.

I wish that more people had gone to this series. I don’t mean to downplay its success, as in fact about halfway through the series we had to change location in order to accommodate the high turnouts. Yet, after we changed location to the out-of-the-way ALANA Cultural Center, attendance dropped off. The people who were coming to the seminars were often the same people. At the final talk, there were less students than adults. For a series with so much value and so much potential, I was struck at the final talk with the sobering realization that despite the plan for future IGD talks, that likely most Colgate students would never enter a space like the one I spent five afternoons in. I think that every Colgate student should. I don’t know how to convince people to take an hour out of their day to be uncomfortable, but I can guarantee that if one can find it within them to commit to doing so, that it would be worthwhile.

I understand why people didn’t go. In fact, I never would’ve gone to the first one had I not been invited by a friend. If you’re waiting for a little push, here it is. If you’ve bothered to read all the way to the end of this article, you probably care at least a little. I encourage you to keep an eye out for future IGD events and series. I hope to see you there.

Caitlin Marie Grimes
University of South Florida
9306
Beyond The States