How To Tell If You're A Coffeeholic

How To Tell If You're A Coffeeholic

It's time to face the facts, coffee lovers. 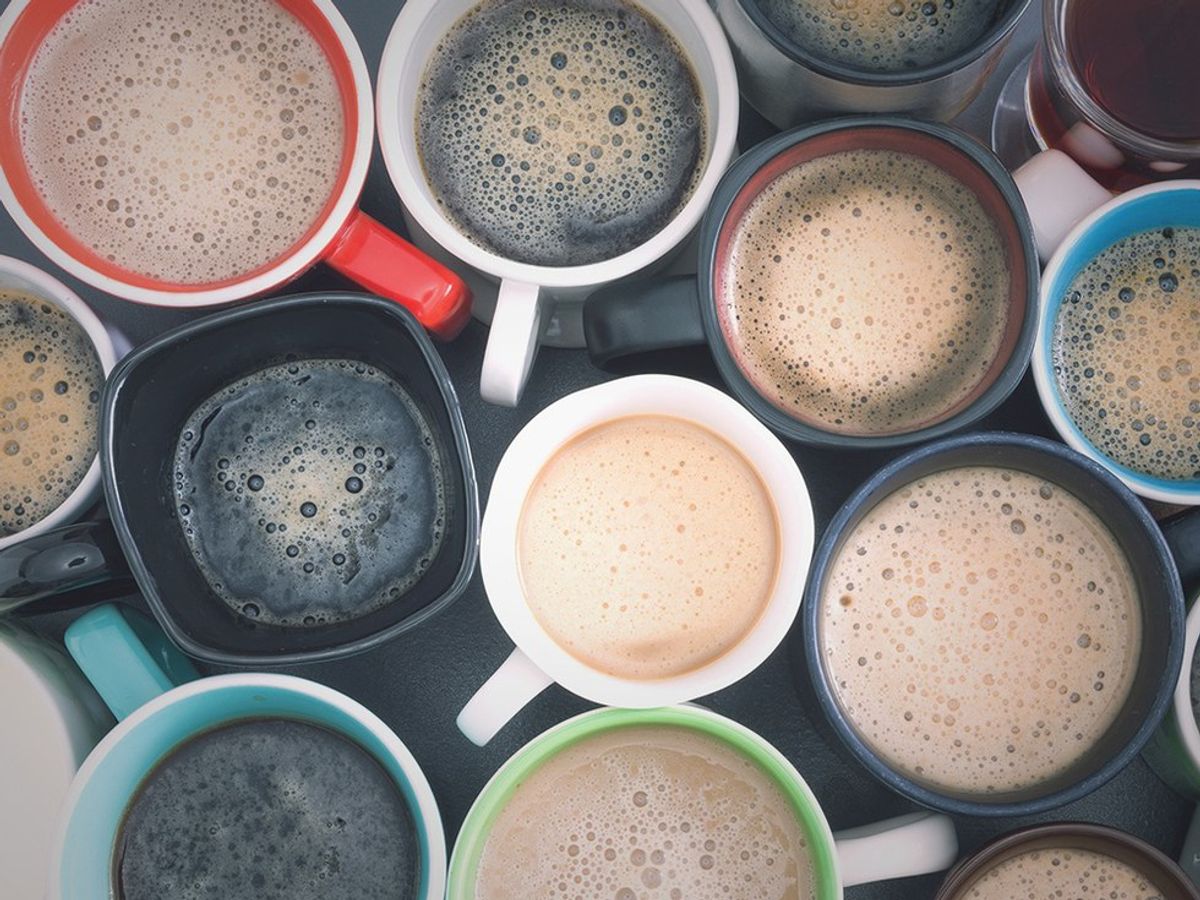 According to a survey of Zagat readers in 2014, 87 percent of Americans drank coffee every day. Those surveyed drank, on average, 2.3 cups of coffee a day. If you drink more than this, as I usually do, you just might be verging on the sacred title of coffeeholic.

Now, I know what you're thinking. There's no way I could be drinking too much coffee. Four cups before noon is just how I roll!

As I write this article, I'm actually hopped up on delicious java, courtesy of my school's coffee machine in the cafeteria. (Tragically, my Keurig hasn't been working properly since the end of last semester.) So I understand your daily pain of getting out of bed and rushing to get that first cup of coffee before class or work. It's a ritual for which I hold the utmost respect. But as I've been consuming more and more coffee as my workload drastically increases -- hello, two essays, two projects, one presentation and one short story due by the beginning of May! -- I've begun to wonder whether the amount of coffee I drink is simply too much. Writing this article is a way to not only help myself become more educated about the (is it even possible?) harmful effects of drinking too much coffee, but also to help all of us understand when it's time to cut back for our own health's sake.

How much coffee is too much?

In college, students learn to survive on coffee to balance out the fact that we've only gotten three or four hours of sleep the previous night, thanks to whatever studying or homework needed to be done. Or maybe we finally just relaxed and didn't realize how late it was until we remembered our 8 a.m. class the next day. Whatever it may be, students adapt to a need for coffee just to stay awake throughout the day. I, personally, find that I need at least one nap on days that I have an 8 a.m. class, sometimes two. And that's after I've already had about three or four cups of coffee in the morning, which are usually followed by about two more in the afternoon and evening while I work on homework.

According to the Mayo Clinic, up to about four 8-ounce cups of coffee a day is safe for adults. Any more than that and there can be side effects, which include but are not limited to insomnia, restlessness, stomach upset, and irritability. (That last one is fairly ironic since most of us are already just as irritable before our coffee.) It's important to keep in mind that most coffee cups -- whether at a coffee shop, Starbucks, or your own home mugs -- are often either 12, 16, or 20 ounces If you drink two 16-ounce cups, you're drinking your maximum for the day, even though you might not realize it.

The other day, I made the questionable life choice of drinking seven shots of espresso. Even though I'd eaten, I felt so sick since I haven't had that much espresso in several months. My body isn't accustomed to much more than black coffee, and I worried whether I would ever be able to sleep again. I could feel my heart beating in my chest at what seemed like the speed of light, but when I checked my pulse it seemed perfectly normal -- I was just so jittery I couldn't think straight.

One 8-ounce cup of coffee has 95 milligrams of caffeine, while one 1-ounce shot of espresso has 64 milligrams. This means that the daily maximum of caffeine one should intake is about 380 mg. When I had seven shots of espresso, though, I had about 448 mg. It's no wonder I was feeling sick and couldn't concentrate. A caffeine overdose is about 500 mg of coffee. Thinking back on it now, I realize that I was one shot of espresso away from officially overdosing on coffee -- but the scariest part is, I've had eight shots of espresso before, so about 512 mg of caffeine, and I felt relatively fine. My tolerance just a few months ago was much higher, and I rarely stopped when I hit 380 mg of caffeine; I didn't even realize eight shots was too much. I just needed my coffee.

When should I stop drinking coffee for the day?

The half-life of caffeine is around four to six hours, so it is suggested to stop drinking coffee about six hours before bedtime. Coffee, and caffeine in general, can affect the body by prolonging sleep latency, shortening total sleep time, increasing light sleep while shortening deep sleep time, and causing more frequent awakenings. Generally, many people choose to stop drinking coffee after noon, but you can stretch it out just a few hours, depending on what time you typically go to sleep. But beware: even decaf still has a little bit of caffeine they just can't get out.

It's also important to think about how much sugar you're intaking if you get lots of fancy drinks from Starbucks or take your coffee with three sugars. Luckily, I drink mine black, so I don't have to worry about unwanted calories and sugars -- but if you're not like me, then you should.

You can actually track how long caffeine will be in your system with caffeine-tracking apps for your phone. For example, Caffeine Zone 2, developed at Penn State, takes into account the specific coffee you're drinking, how quickly you drink it, etc. Apps like these can help you regulate that your coffee drinking does not cause you to have more than the recommended 380 mg of caffeine in your system at any point.

I'm not even going to verge on the subject of coffee addiction, because I'd rather not know whether it's applicable to me. If you'd like some information on it, though, you can find that here. From what I skimmed of that article, headaches are a symptom of caffeine withdrawal -- but since I've had chronic migraines for years, I may continue to live in denial of any coffee addiction.

If you want to be reassured that your own possible coffee addiction is justified, a study done last year is here to save the day. When looking at coffee consumption among nonsmokers who drink between one and three cups a day, they have a 6 to 8 percent lower risk of dying than non-coffee drinkers. Those who drink between three and five cups a day -- regardless of the symptoms that much coffee might give you -- have a 12 to 15 percent lower risk of dying. In the end, it might just be that us coffeeholics will outlive non-coffee drinkers -- unless, of course, there's a coffee shortage that rolls around first.