Who will win, the Cavs or the Refs? 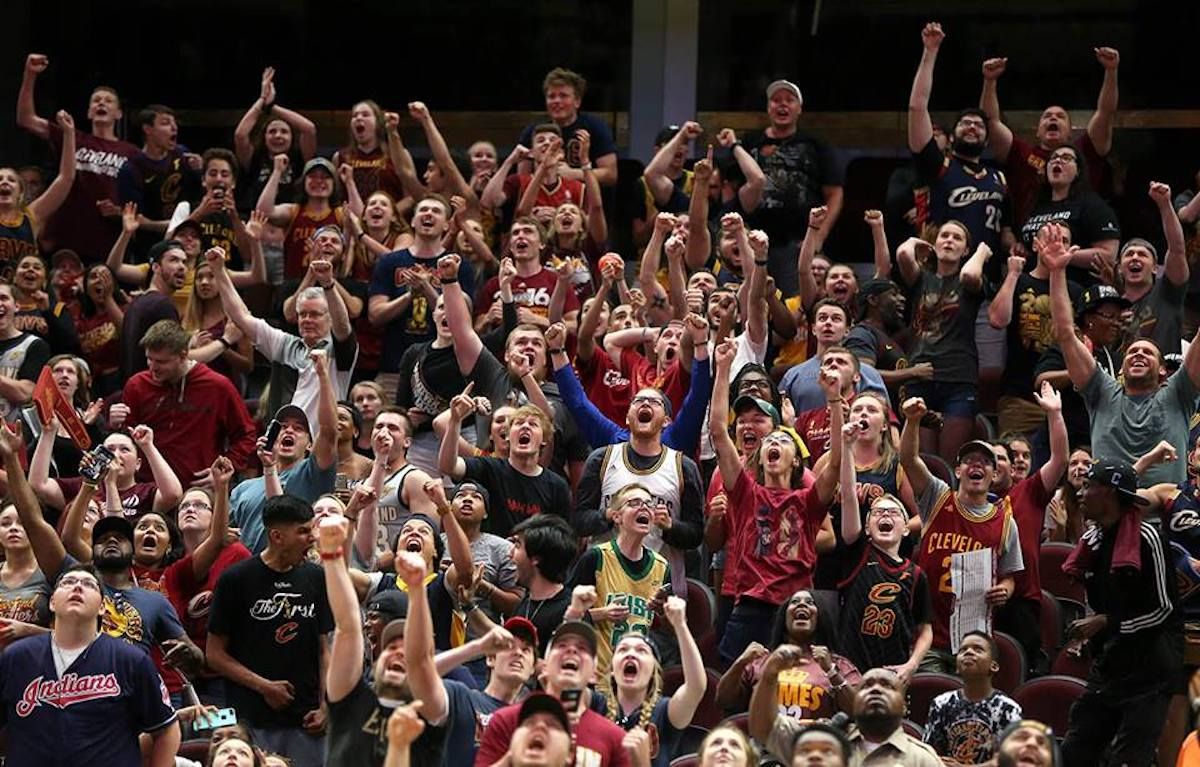 Being born and raised in Cleveland, I have cheered on the Cavs my entire life. Even when the team couldn't make it to the playoffs, I still cheered them on. But when we did finally start making it to the playoffs, May and June became a Clevelander's favorite two months. Cue the nailbiting moments at the end of playoff games against the Celtics, Raptors, Warriors and all the other teams we have faced. From the first minute of the game to the last, Cavs fans are always engaged and reacting in some type of way! Here are a few reactions you might see from a Cleveland Cavaliers fan during a playoff game!

In Cleveland, we don't sit down until the Cavs score the first basket. If this means that we have to stand for a whole 3 minutes, we do it. Anything for our boys!

2. Lebron is the father of all of Cleveland. Just look at him!

Lebron is a gift from God himself to our humble city of Cleveland. It is safe to say that the Cavs would not be where they are now without him. He is the father of our people (aka any Clevelander). We bow down to the king at any and all costs. If I ever saw Lebron James within 20 feet of me in the flesh, I really don't know what I would do (probably faint tbh).

This is an ongoing joke for all Clevelanders that will probably never die. Ever. We are forever proud that we beat the Warriors (who had a 3-1 lead, did ya know??). Pretty sure it is engraved in my brain. Also pretty sure it subconsciously comes up in my dreams every night. But we wouldn't have it any other time.

As we all know, sometimes the Cavs take shots that they have no business in taking in that moment in time. There are too many times that I remember curling up on my couch or seat at the Q in utter horror that the Cavs took a certain 3-point shot. I love my boys, but they also really have to learn when to take a 3-point shot or just take the dang ball into the paint!

5. YES, BABY, CLEVELAND AGAINST THE WORLD!

This is a common reaction you'll hear from a Cavs fan during any game as well! We have shirts, blankets and hats that say this. Heck, some of us even have tattoos that say it! It's a common CLE phrase that will never die.

6. Steph Curry, put that dang mouth guard back in your mouth.

If there is one player that we cannot stand, it is Steph Curry. Something about him just makes all of us from Cleveland cringe. Maybe it's because he is the star of our most rivaled team. Or the fact that he likes to egg LeBron on to fight with him. But those are just hunches I guess. If I had the chance to meet Steph Curry or any other celebrity, I would choose the latter (sorry Steph, nothing against you as a human. I'm just from Cleveland). We also just hate how he plays with that mouth guard. That belongs in your mouth, buddy!

7. BOYS YOU NEED TO MAKE YOUR FREE THROWS!

This is another all-too-common phrase you can hear a Cavs player belt out during any other game. I preface this with the fact that I mean it completely out of love. But our boys need to learn how to make their free throws. I totally understand that it is a whole heck of a lot stressful out on that court. Believe me, I understand. But when you miss an easy shot that you practice every day, you really put Cavs fans on edge. Please Cavs, please please please make your free throws (it's okay JR we will eventually forgive you for game one of the 2018 finals. We still love you.).

8. I can't look. I really just can't. Tell me what is happening.

I, for one, am guilty of saying this most games. If I am at the Q, I have a habit of curling into my seat, covering my eyes and making whoever I am with narrate what is happening. If I am at home, I do the same but throw a blanket over myself. See, I have this theory that if that Cavs are doing poorly, they will do better if I hide. It only works sometimes, though...

9. Well, looks like the refs are rooting for the other team, again...

The Cavs have a habit of having the referees be totally against them. Lots of refs will blatantly be for the other team (*cough cough* the Warriors). We have a running joke of "Who will win? The Cavs or the Refs?" It's a sad but true reality for Cleveland. But don't worry, refs, we'll getcha.

10. IT'S IN OVERTIME SOMEONE PLEASE END THIS STRESS AND TORTURE!

The Cavs also have a habit of making it into overtime in some of the most important games of the year. As if the regular time of the game isn't stressful enough, fans now have to watch an extra excruciating five minutes of game time for each time OT is reached (again, JR I promise we still love you and will EVENTUALLY forgive you).

At the end of the day, we all are so proud to be from Cleveland. Being downtown during any Cavs playoff game is something magical. The city comes alive like it has never done before. To say that I love Cleveland is an understatement. Thank you, Cavs, for helping put our amazing city on the map and giving us all something to really bond over.

Best of luck to both the Cavs and the Warriors this NBA finals season. Let the best team (uhhh, the Cavs?) win. We are proud of you, Cleveland Cavaliers. No matter what the outcome, we are proud of the way that you represent us and our city. And a special thank you to the king, Lebron James, for all that he does for his time and the way that he leads his boys. #WhateverItTakes

basketball
Report this Content
This article has not been reviewed by Odyssey HQ and solely reflects the ideas and opinions of the creator.