Here are some suggestions 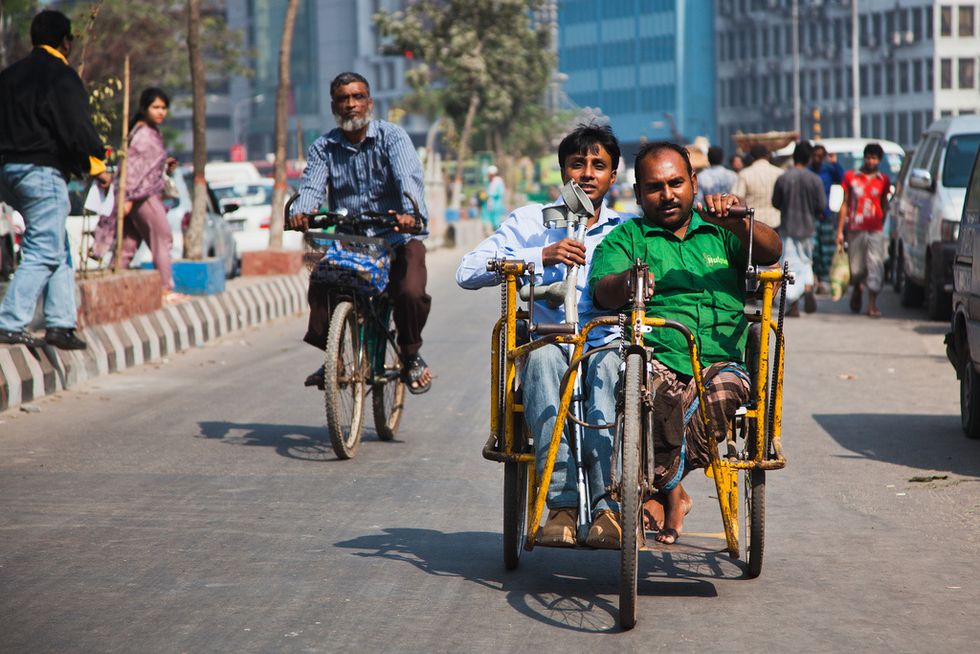 Imagine that you are in this scenario: Your general psychology professor walks up to you after every class and tells you that you should drop out of college, give up on your dream of becoming an attorney, and he claims that you must be cheating because "people like you" do not get A's.

Also, consider this: When asked what they thought were the biggest obstacles that disabled students face in the social sphere using a few words, nondisabled college students replied with words such as "social skills", "functioning in a social environment", "talking about age-appropriate things", and "ability to maintain conversation". Do you recognize a pattern? The perception that nondisabled individuals have about disabled people and how they should treat and interact with them is severely flawed.

Now, of course, there are exceptions to this, people who have a loved one or close friend that is disabled may treat this population and talk to them as though they would treat or talk to any nondisabled person, but those people are few and far between. How exactly do I know this you may ask? Well I know because I am one of those people, one who has a physical disability and is often treated and talked to as though I am not equal to my nondisabled peers.

Now, since the issue of the way people with disabilities are treated by the rest of society is a bit of a broad issue, to say the least, I would like to specifically focus on how the way in which those with disabilities are frequently negatively treated by nondisabled people can translate into the development of psychological issues such as anxiety, particularly social anxiety, and depression, as well as low self-esteem and what we as a society can do to prevent the development of these issues from occurring. I personally feel that the negative treatment can translate into the development of these issues due to the effects of the unfortunate treatment being so emotionally destructive and painful that these issues are almost inevitably developed. Furthermore, I think that in order to prevent these issues from developing we as a society can make a concerted effort to try to change our perspective and mentality about how disabled people are to be treated and about those with disabilities, in general.

Another thing to consider is how we can change society's perspective of who disabled people really are beyond the typical stereotypes. One of the major changes that society can make in order to accomplish this is educating people from a young age about disabilities in general and how they should treat and interact with their disabled peers. Specifically, I believe one of the most effective ways of providing this type of education is through programs that could potentially be implemented as part of school curriculums. Additionally, including disability as a topic that can be focused on in the media would help to ensure that society eventually adopts a perspective that disabled individuals are "normal" human beings with goals and aspirations just like those who do not have a disability.

In addition, support that the unfair, negative and unequal treatment exists and is prevalent is evidenced, although not directly, by the perspective that the greater majority has adopted in terms of how we view disabled persons. Generally speaking, since the times of when people first began being diagnosed and labeled as disabled, society has been "taught" to regard and treat those with disabilities as though they are inferior, because as the word "disabled" implies, they have some lack or absence of ability, and thus they must be looked at as being inferior to those who don't have a lack/absence of ability. Which, to most people, would seem completely misguided and ignorant, however, although it is somewhat subtle, this mentality seems to still be prevalent in today's society.

Despite this evidence, those who do not agree may propose that although some people might still treat disabled people unfairly, it has gotten better. "We have made progress" is something they may utilize to argue their point of view. And while that may be true, we haven't quite gotten to the point where we can say that we have done all that we can do to level the playing field between disabled and nondisabled people. Maybe one day, we can finally accomplish that, and disabled people will no longer be looked at as just being everybody's inspiration, and instead start being recognized for some of their accomplishments in life and by accomplishments, I don't just mean existing, but rather thriving and conquering obstacles head-on.

The other aspect of the argument that we must address is whether or not this negative and unfair treatment could potentially contribute to disabled individuals developing psychological issues such as depression, anxiety, social anxiety, and low self-esteem, just to name a few. I feel that it definitely could contribute because the negative and unfair treatment will obviously cause the individuals being affected by it, lots of emotional pain, which could lead to the development of long-term psychological difficulties. Moreover, it might seem obvious and intuitive that individuals with disabilities often deal with issues related to self-acceptance, and so the ill-treatment could exacerbate these issues and generate greater and more complex psychological difficulties as well.

Now, of course, people who may refute the idea that the treatment could cause these issues may say that in order to avoid the development of them, people should just "toughen up" and "get a thicker skin", it's just not that simple. In fact, it could be said that it is inevitable for disabled individuals to develop these issues due to many of the obstacles that they face daily. Overall, the issue of disabled people being unfairly and negatively treated and the consequences of that is a complex issue that I only have scratched the surface on, here. There is still much to be done to rectify society's mentality regarding this population and to help prevent against the development of psychological issues in persons with disabilities, but rest assured, we are slowly but surely getting there.

People with disabilities are just that – people. They deserve to be treated with as much kindness and respect as any other group of human beings, but unfortunately treating those with disabilities in such a way doesn't happen nearly as much as it should. Hopefully, one day in the near future the playing field will be as leveled as it can possibly be and society will view disabled individuals in the same way as nondisabled persons.

disabilities
Report this Content
This article has not been reviewed by Odyssey HQ and solely reflects the ideas and opinions of the creator.