CF Patient Brings Humor To Home IVs With Picc-Line-Turned-Meme Posts
Odyssey
CurrentlySwoonLifestyleHealth & WellnessStudent LifeContent InspirationEntertainmentPolitics and ActivismSportsAdulting
About usAdvertiseTermsPrivacyDMCAContact us
® 2023 ODYSSEY
Welcome back
Sign in to comment to your favorite stories, participate in your community and interact with your friends
or
LOG IN WITH FACEBOOK
No account? Create one
Start writing a post
Health and Wellness

Tim Almeter got creative with his picc-line infusions, posting photos each day for 12 days. 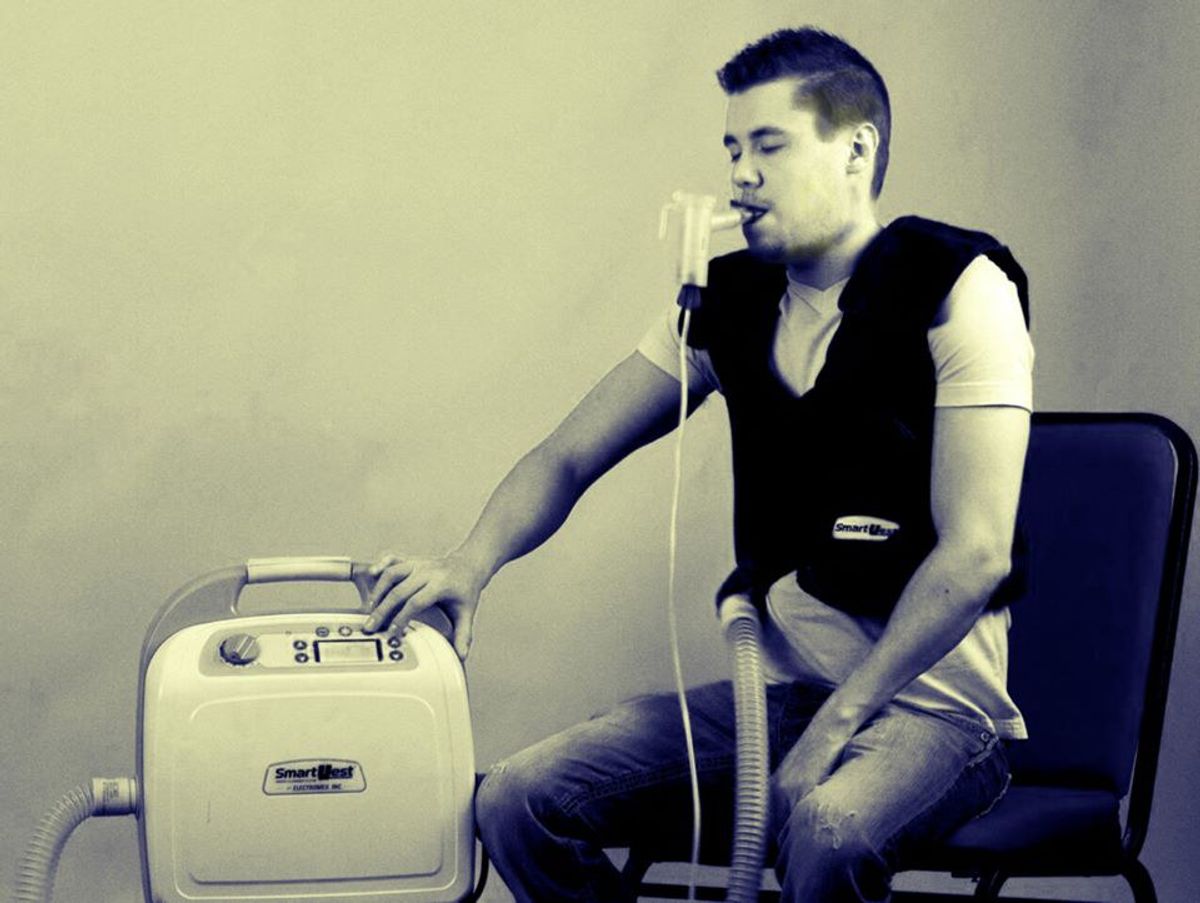 What began as a flirty snapchat very quickly became a hit in the cystic fibrosis community, when a 25-year-old CFer uploaded an image of his picc-line-turned-meme to Facebook.

Tim Almeter is a CFer from Missouri who turned his 12-day picc-line experience into a daily opportunity to make others laugh.

Picc-lines are nothing new to Tim. Since teen-hood, Tim has seen an increase in lung infections, with gaining weight being a major challenge.

His daily routine consists of three to four breathing treatments, including inhaled medications and the use of his therapy vest. He takes digestive enzymes with each meal and takes oral antibiotics regularly.

Almeter says he has always approached cystic fibrosis with humor and positivity and takes comfort in knowing that his light-hearted mentality towards CF puts his loved ones at ease.

The picc-line-turned meme facebook posts came to life when Tim sent a snapchat to his crush, in hopes of simply making her laugh.

Her enjoyment led Tim to share it with Facebook, where it gained a following of fellow CFers and spread laughter and inspiration through the community.

What amazes me most about people with cystic fibrosis is their overwhelming resilience and strength in the face of adversity.

Tim has been through quite the struggle with his CF experience, though you’d never be able to tell from the outside. On the outside, he may be perceived as a hunky muscle-man, but little do many know, Tim has fought hard to get where he is today, struggling to gain weight, needing a feeding tube, and suffering from eight incidents of collapsed lungs, seven of which required chest tubes.

The addition of humor to the mix of the courage and willpower already necessary in the fight against cystic fibrosis makes for a powerful force to be reckoned with.

Almeter says he has found stability in his health now that he puts great effort into exercise and weight lifting. He is currently at a healthy BMI with an FEV1 (aka: lung function) at about 82%.

Tim, it gave me great pleasure as a fellow CFer to see your picc-line posts, and I can only imagine how many other people with cystic fibrosis you inspired in the process. I wish you nothing but the best in your future endeavors and look forward to following your journey with weight lifting.

Tim tells me he hopes to eventually get married and successfully receive a lung transplant in the event that he ever needs one.

Almeter says he is grateful for his powerful support system, an abundance of close friends and family who deeply support his fight against CF. He also says his older brother who also has cystic fibrosis has been a huge inspiration – especially after braving through a double lung transplant in 2009.

People Of Walmart: People Have Actually Lived In Walmart