The One Where I Get Catcalled
Odyssey

The One Where I Get Catcalled

Contrary to what you've internalized, I'm actually not here for you to shout at. 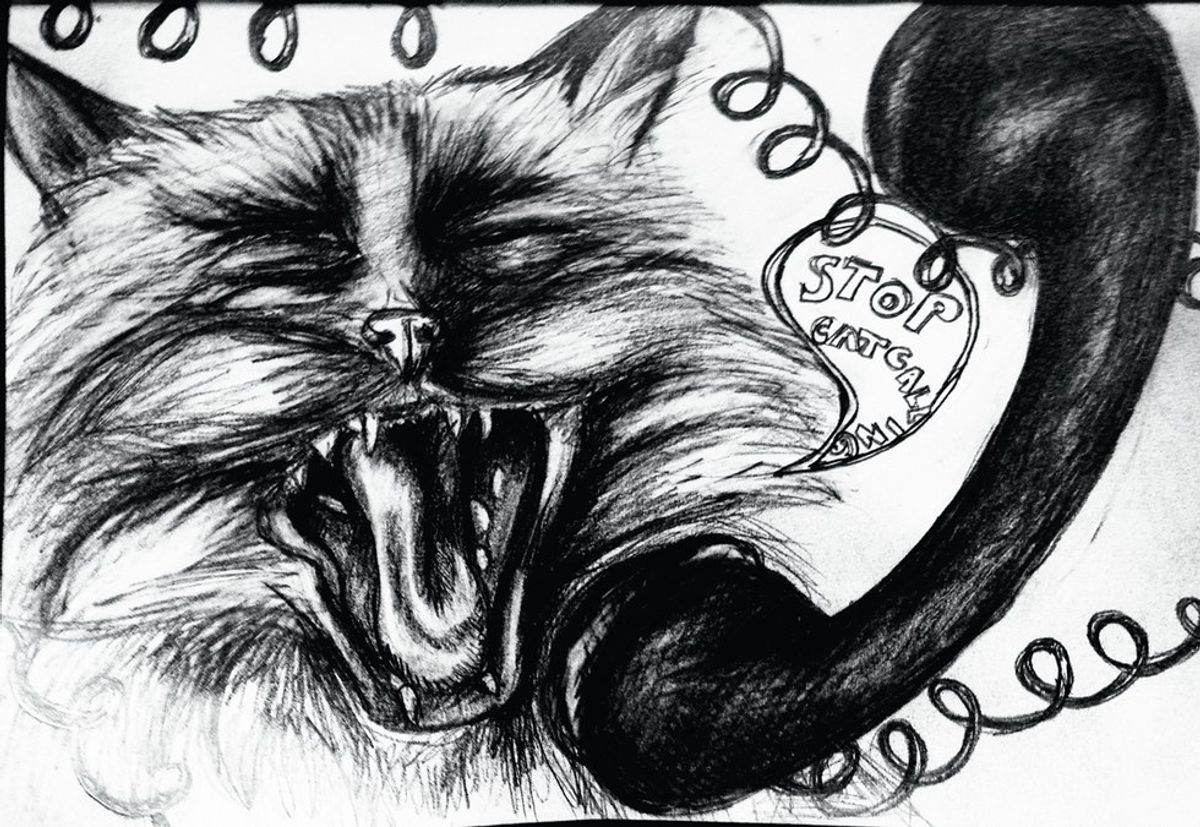 Picture this: It’s around 7 p.m. I’m riding my bike around the park a few blocks from my house. The sun is setting, sending beautiful orange light across the field where several young children are playing soccer. I weave in and out of their parents and siblings as my music plays through my headphones. My heart pumping and my legs pedaling, I round the final curve of the track to make my way home, and I feel powerful. It’s one of those moments where I am totally at peace with myself and at home in the world around me.

I reach the stoplight and stop my bike, my heart rate slowing down. Suddenly, a car barrels through the green light, just a few feet from me. On the passenger side is a gray-haired, shirtless man. He leans his torso out the window as he passes and shouts, loud and arresting and straight at my face, “Yes.”

As he drives away, he does not draw his body back into the car. His masculine frame remains exposed out the window as he turns to look at me, his voice echoing again and again with the thud of my heartbeat, his eyes fixed on me as he recedes into the distance. And just like that, one word has completely deflated me.

My heart is racing again, but this time, it is not from exercising, from riding free and happy through the dusk. I am aware of my body, but it is not through the lens of power and strength. I have to carry myself home like an empty mass, and as I clear the blocks to my house, I find myself pedaling slower and slower, even though all I want is to get home and lock every single door we have. There’s a certain feeling you get when you creep downstairs during the night, the whole house dark, and it’s as if you can feel something tickling at your back, following you. Imagine that, but in the daylight, just a couple blocks from home. A truck passes me and I stare at it nervously, needing to reassure myself that it is not the same car, the same man coming back for me, completely helpless. There is all that power in just one word.

When I get home, I talk aloud to myself as I make dinner in my quiet house. I find myself spitting out angry curses, my thoughts raging. Where just a moment ago I felt so empty, I am now full of rage and fervor. How dare a grown man see an 18-year-old woman on a bike and physically force himself into her space when he has all the safety of a moving car? How dare he raise his voice at me and tell me “yes,” as if he is answering a question for me, a question I never wanted him to ask? How dare the world teach him that he is allowed to do this to me?

This isn’t the first time I’ve gotten unwanted attention from men, but it has never hit me like this. Once, when a man physically hissed at me like a cat, I laughed it off, finding it strange. And I guess the image of this scene is strange, too -- a man riding shirtless in a car, his gray hair flying in the wind as he shoves himself out the window, shouting. But what really hurts is that it’s not strange at all. It’s not new, it’s not an isolated event, and it’s not without a real and sickeningly ingrained context that I cannot help thinking about.

It is something about that word, “Yes.” I’m not sure what his thought process was in choosing that word to spit at me as he passed. Maybe to him, the word is harmless. Maybe he’s forgotten he said it at all because maybe it doesn’t mean anything to him. But that’s exactly my point- after hearing the word “yes” forced at me, too close and too loud, I cannot help but think about all the men who have passed by “yes” like it is a box they do not need to check. I cannot help but think about all the women who have been taken advantage of because no one thought to ask them for a “yes” they were not prepared to give. The “yes” that this man hurled at me, echoes with every single “yes” that we have had taken from us, every “yes” we have not even been given a chance to say, every “yes” we didn’t mean and didn’t want but that was thrown at us like a blow we were completely powerless to dodge. To him, it may just be a word, but to me, it is another horribly obvious example of “yes” being stolen and treated as if it does not mean anything and does not belong to me.

Well, on second thought, I guess you do. I guess you do get to do all these things and more because you live in a world that has taught you a “yes” belongs only to you. You have learned and internalized every lesson of a society that taught you that my femininity exists only to be gawked and screamed at. You have been taught time and time again that my existence is an open invitation to hurl words and gazes at me and drive off feeling all the more powerful because you have just confirmed the lessons at the very foundation of the tower where you sit, free from responsibility.

What you do not get to do is force these things on me without me fighting back. I may not have said anything at the time- I was too stunned, too hurt, too frozen where I stood. But not now. Countless women have fought for generations against the institutions that allow you to act this way, and it is because of them that I have the freedom to raise my voice more loudly than ever. They are all behind me as I write this and tell you that now, I will not react with silence. You have not broken me down or quieted my spirit. You have not taken away my strength and my passion -- you have only ignited a brighter fire in me to speak out, to fight back, to raise my voice for myself and all the people who are taught that their body and their “yes” do not belong to them. You have only made it more important for me to answer you.

So now I will answer your one word with one of my own. One that has been ignored and stepped on and unheard far, far too many times. One that is a complete sentence that I mean now more than ever.

Dear man in the car, no.