The advantages of having a care in the (natural) world 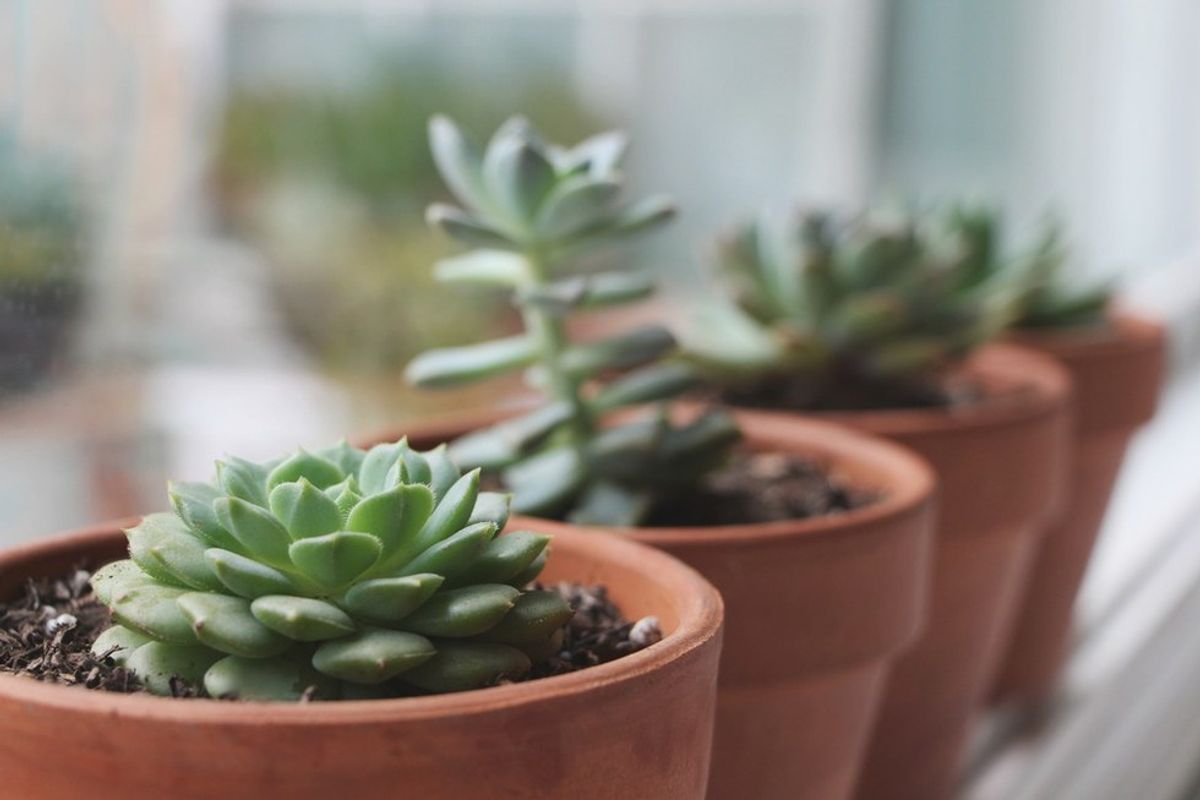 Last June, my friend Hunter gave little succulents to all his graduation party guests. Well, maybe not all of his guests. I had to leave early. Later, when he realized that I hadn't taken a plant, I assured him that "I like plants better outdoors." I wasn't feeling the succulents scene. The heavily-filtered tumblr posts that captured fields of French wildflowers attracted me, but the ones that presented a corner shelf of potted cacti seemed lackluster. This sounds like a bad case of overthinking, and for me, that's no surprise- but I truly sensed that greenery belonged in the wild, in its own ecosystem, and in no system of mine.

However, my ecosystem developed. At my Haverford College apartment, three succulents sit on my windowsill. At my family home, four claim a sun-friendly spot in the study. I love them.

My first plant was a gift from my school. One September day, the arboretum staff set up a table in the dining center and distributed "freshman plants." There were all sorts of plants, but I picked up a mantis-green succulent buddy. I named him "Orlando" so that I could tell people his name and finish the sentence with, "even if he doesn't Bloom." (Get it? Get it?) Although Freshman Plant Day might simply exist to advertise the arboretum, I feel that literally giving life to college students- or to anyone- is a beautiful thing, and here's why.

I have named my three apartment succulents Orlando, Keira, and Johnny- after the leading actors in the Pirates of the Caribbean films. They are a kind of family, and I am responsible for them. They're not human, but they help me celebrate being a human, being someone who cares about community and about perpetuating life to its fullest.

When it comes to paying attention to others' needs... I fail, a lot. But I want to improve, and maintaining plants is good practice. Just like babies or dogs, plants cannot use words to tell you what they need... unless there's some freaky Little Shop of Horrors stuff happening. As a succulent owner, I have to pay attention to the signs and learn what they mean- if Johnny and Keira's tips begin turning pale brown, I can't assume that the same method will remedy both. I have to invest in learning a new language. The other day, I was fairly sure that my succulents were experiencing drainage problems, so I took them on a field trip to find pebbles; that chill, exploratory time nourished my entire day.

Some people don't believe in color psychology, but many do. And if you have ever been in a hospital that wasn't painted white, I bet I can guess what color it was painted, at least partially. Green! Since it is the color of nature and isn't usually an overwhelming sensory experience, green can de-stress you. If you're looking for a bit of brightness, you don't necessarily have to go for the classic option, a vase of already-dead flowers. You can allow a bit of dirt into your space, because with it comes the sweet serenity of beloved, living color.

Plants get you excited about something genuinely good.

It wasn't Orlando, no. But one of my little guys bloomed. I did not watch the whole process, but when I began to notice the bud, I felt inexplicably proud of the plant... and when a flower finally opened, I could barely believe it. When I am hype for an event, it isn't the same as feeling the thrill of something as simple as this.

Therefore, forsooth, alas, etc... I present a turnaround story and a compelling idea. Before I knew the joy of having succulents in my life, I was missing out on a lot. If you want a new form of self-care, divert your attention towards one or two of these small friends; the love you give them will only grow.