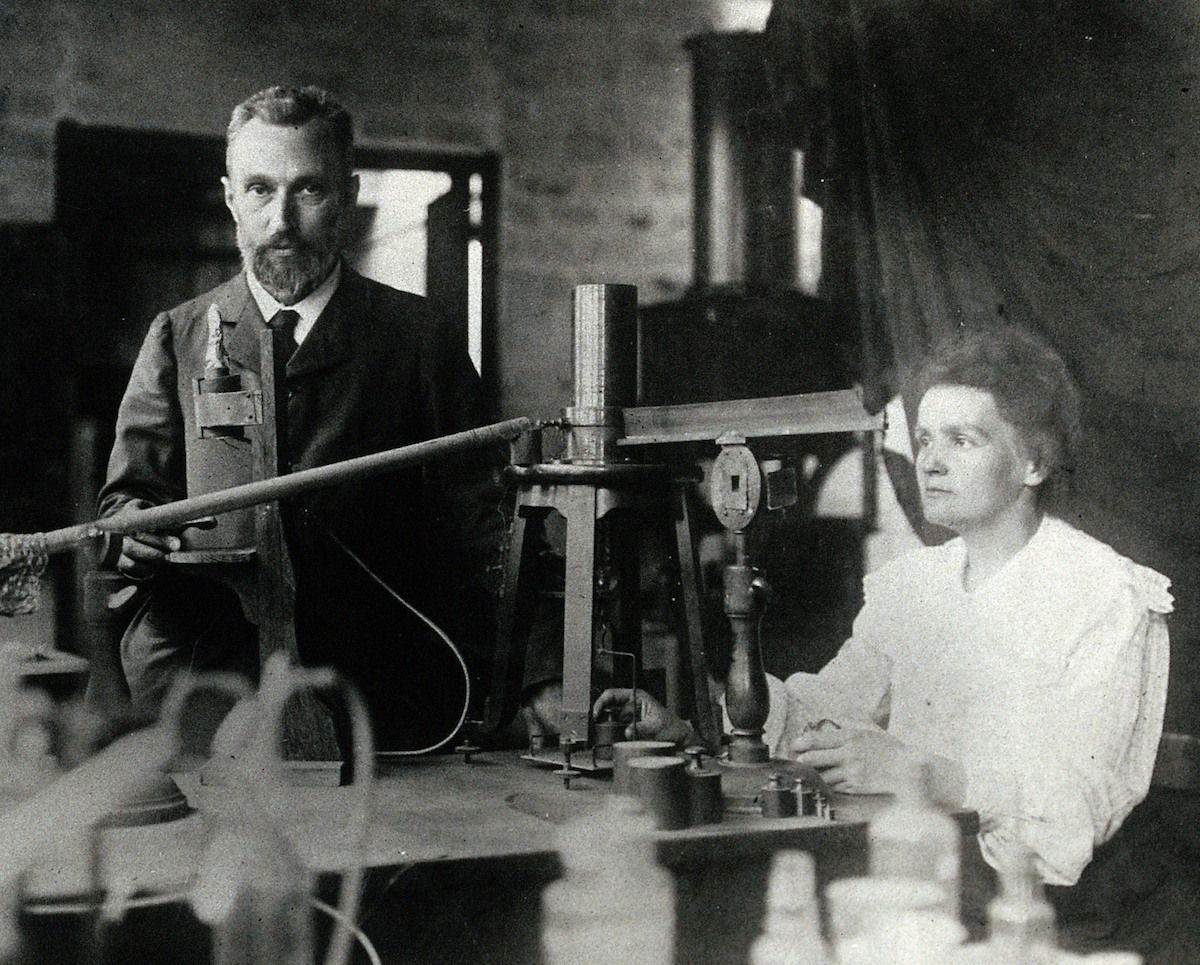 Today it isn’t used for much, other than cancer treatment, but when radium was newly discovered, it was commercialized to a great extent and put in many things.

It was marketed as a miraculous panacea, and accordingly was added lots of things, something that in retrospect was an alarming practice. For example, there was radium chocolate, radium-infused water, toys containing radium, toothpaste that included both radium and thorium (also radioactive), cosmetics, and perhaps most famously, watches whose dials were painted with radium.

Unfortunately, it took a little while for people to realize the dangers of radioactivity, and that’s because radium was the first element discovered that was described as radioactive.

While Marie Curie was working on isolating her radioactive elements (thorium, uranium, radium), Wilhelm Roentgen was helping to lay the foundations for Curie’s conjectures, as he (almost by chance, as scientific discoveries often happen) observed fluorescence emanating from a tube covered in black paper. His conclusion was that this was caused by some type of ray since it was shining through the black paper, and accordingly named the “rays” “X-rays” (though related, it isn’t the same thing as today’s X-rays).

Antoine Becquerel then decided to experiment and confirmed Roentgen’s findings. His experiment was pretty interesting–he took photographic plates and placed a “metal object” between the plates and “fluorescent” (radioactive) salts to see if the image of the object would transfer to the photographic plate (sound familiar? perhaps like...getting an X-ray? again, similar, but not the same). However, he thought that the salts absorbed energy from the sun and then emanated them, so he was going to do his experiment in the sun. It was cloudy in Paris on the day he planned to do his experiment, so he stuck his materials in a dark drawer until the sun could come back out. What he found, though, was that the salts did not need sunlight. In other words, he discovered the phenomenon of radioactivity.

Marie Curie, who was a student working with Becquerel, was the one who first used the word “radioactive”. She did so after further investigations of these mysteriously luminescent elements which led her to conclude that their behavior was due entirely to their nature as elements, and not due to outside interactions (such as with sunlight or other chemicals/elements).

Marie Curie is definitely one of my heroes, so I’m going to take a moment here to underscore how cool she was. Not only was she the first woman to win a Nobel prize, she was the first person, regardless of gender, to win two Nobel prizes which were not in the same field (and only one other person, Linus Pauling, has since). This is amazing in itself, but it's even more amazing when you consider the time at which this was happening.

When she first wanted to get a higher education, she couldn't enroll because she was a woman. She wasn't even allowed into school, and yet she managed to go on to discover more than one element and win TWO Nobel prizes in two DIFFERENT fields. Eventually, she was able to enter university when she moved from her native Poland to Paris. However, even after earning two degrees there, she could still not work at the university in Poland, so it was back to France for her (and by this time, Pierre).

During this time, she experimented, unfunded, in a shed near the school. She didn't even have a proper laboratory. Oh, and she couldn't even present her own findings to the French Academy of Sciences. She had to get a colleague to do it. Because she was a woman. She also couldn't give speeches on the work that both she and Pierre did, the work that she was the one to start. Honestly, were it myself, I might have given up out of frustration, but I suppose that it only proves her dedication to scientific inquiry and not fame.

What's more is that before she could observe the thorium, uranium and (as-yet-unknown) radium, she had to extract it from something called pitchblende, which was a strenuous process in itself. First of all, pitchblende could contain up to 30 different elements, of which the ones she needed were only present in trace amounts. Since there were so many, she would have to employ various methods to get rid of the elements that she was not interested in. Evidently, even with later help from an industrial chemical company, it took Marie "3 years to isolate one-tenth of a gram of pure radium chloride". That's tiny.

Pierre was hit by a car and killed in 1906. However, she kept on with her work. When WWI was creating casualties, she crafted portable radiography units (essentially X-ray units) and drove them around helping as the director of the Red Cross radiology service.

Tragically, since long-term effects of ionizing radiation were unknown, she took no precautions when working with her radioactive materials, and she is believed to have perished from a disease that resulted from the long-term exposure.

I realize I went on a tangent, and that scientific discoveries are never due to just one person, but Marie Curie played a huge role in the discovery of radium and deserves recognition. She is so inspirational, and not just to females. Anyhow, the history of radium is an interesting one, especially since an element that was/is so dangerous and detrimental to living things was used so widely when first discovered.