Books Every '90s Kid Has Read

Books Every '90s Kid Has Read

And some you even ended up loving 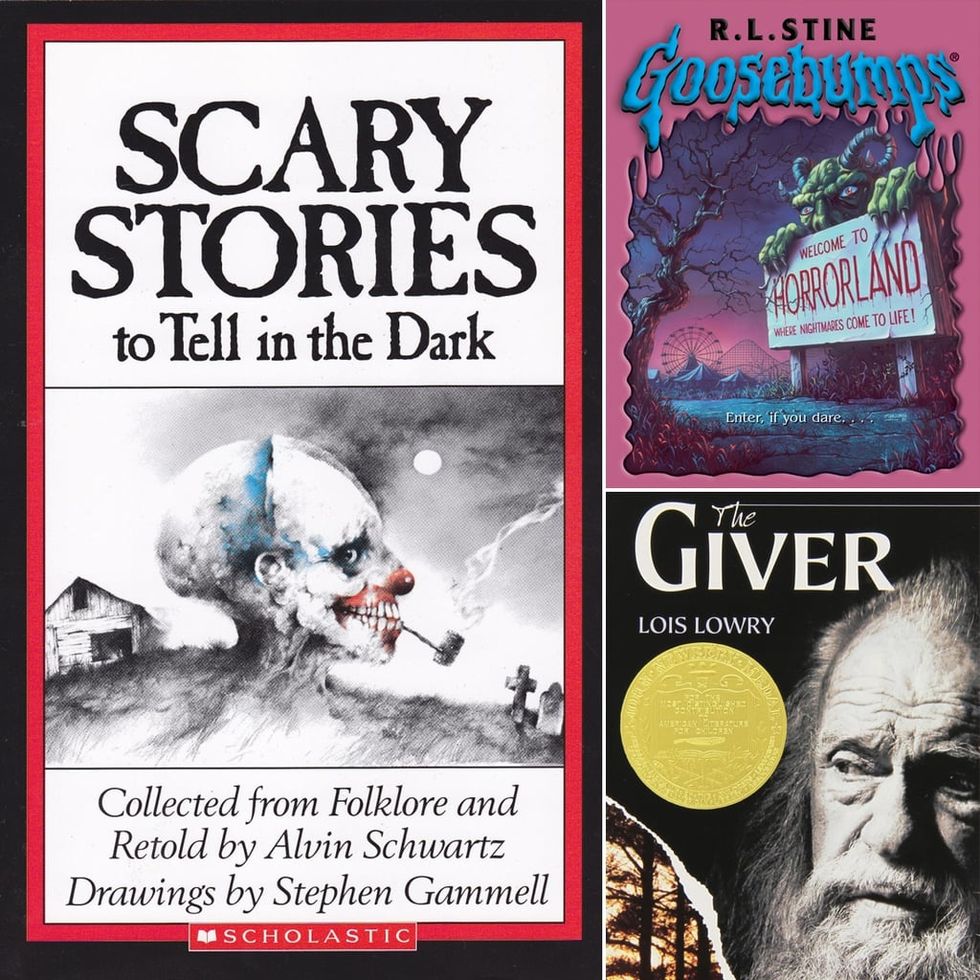 If you were reading books as a kid in the 90s, then more than likely it was being forced. They were always a reading list (ESPECIALLY over the summer), or a book report was due. But, more times than some of ya'll might be willing to admit, we ended up loving those books. Others we've tried to obliterate from our memories. I do apologize if any of those titles that still haunt you to this day end up on this list.

Afraid of the sea after witnessing his mother drown, a boy brings shame upon his father and tribe. Finally pushed to the limit, he takes off one night in a canoe and overcomes his fear of the sea. Faced with many life-threatening encounters while lost at sea, he proves, most importantly, to himself that he has always had the courage inside of him to face his fears.

Seriously, though, the best Goosebump books were the ones where you were able to choose your own endings, amirite?

Image: The Sign of the Beaver by Elizabeth George Speare: Yearling ... www.google.com

My classmates and I were introduced to this series in the 2nd grade. Our teacher would read to us after recess when we were all coming down from that playground high, and it's possibly one of the best memories I have of school.

One of my favorite books and series ever, Homecoming was the first of seven novels in the Tillerman Cycle. Dicey was my hero, one of the first female characters I came across that I could relate to because she was nothing like the other girls. Independent, fierce, and a bit of a tomboy, she handled her family's shit like a boss and made me feel less alone with my own family's dysfunction. The rest of the series follows the Tillerman siblings as they grow, as well as friends they've made over the years: Dicey's Song, Seventeen Against the Dealer, Solitary Blue, Sons from Afar, The Runner, and Come a Stranger.

Sometimes I wonder if anyone else read this book, and then I'll come across a Beagle with the name of Shiloh, and the world feels like it's still spinning.

Beverly Cleary is the beautiful soul that gave us Henry Huggins and Ribsy, as well as Henry's friend and neighbor, Beezus, and her little sister, Ramona.

Image: Seattle Writer Reflects On How Judy Blume's Books Inspired Her To ... www.google.com

If you're a true 90s kid, then the name Judy Blume makes you think of Are You There God? It's me, Margaret, Tales of a Fourth Grade Nothing, and my personal favorite, Superfudge.

Image: Scary Stories to Tell in the Dark by Alvin Schwartz | Scholastic www.google.com

These were the most terrifying books a kid in the 90s could own. And not only did we shit ourselves the first time reading it, but we also tortured ourselves by reading it over and over again, though I couldn't tell you why. And then someone thought it would be a brilliant idea to make TWO MORE shit inducing books that, shockingly, we bought and read. More Scary Stories to Tell in the Dark (1984) and Scary Stories 3: More Tales to Chill Your Bones (1991) were just two more reasons to sleep with the lights on and race up the stairs in the dark, risking our lives and teeth lest we miscalculate one step over the chance that something was going to come from the shadows and possess us.

If every school were like Wayside, we'd be much happier adults.

Nobody could make you read and love poems like Shel Silverstein. And nothing was more exciting knowing there were more poems waiting for you in A Light in the Attic (1981) and Falling Up (1996)

The Stinky Cheese Man and Other Fairly Stupid Tales (1992)

As soon as I'm done writing this article, I'm heading to the closest bookstore that carries this book.

Adventures of the Bailey School Kids (1990)

This ended up on my summer reading list, and I finished it in a few hours. And then I read it again, and again, for the rest of the summer. I was already obsessed with the idea of living forever, and then this story of a family that actually can fall into my lap? The universe was giving me a sign; my 3rd-grade self was convinced. And my 34-year-old self still is.

Another book that was on my summer reading list, I had never forgotten how I felt when I was first reading this book. It still has the same effect on me as an adult (yes, I still read it…sometimes, not often, just…like, every now and then. It's not that weird. It's really not).

Image: I'm still not over... The ending of 'Bridge to Terabithia' | EW.com www.google.com

This sits at the very top pf my favorite childhood books. I think it may have also been one of the first times I hated a book that I also loved so much because the author did a thing to one of the characters, and how are you supposed to forgive them and keep reading the words they wrote after they've betrayed you?

Image: Mrs. Frisby and the Rats of NIMH by Robert C. O'Brien www.google.com

Image: Review of “Island of the Blue Dolphins" by Scott O'Dell | Rhapsody ... www.google.com

I remember this was a class book (meaning we all read it during class) and I was so thrown by the fact that this was possibly based on true events.