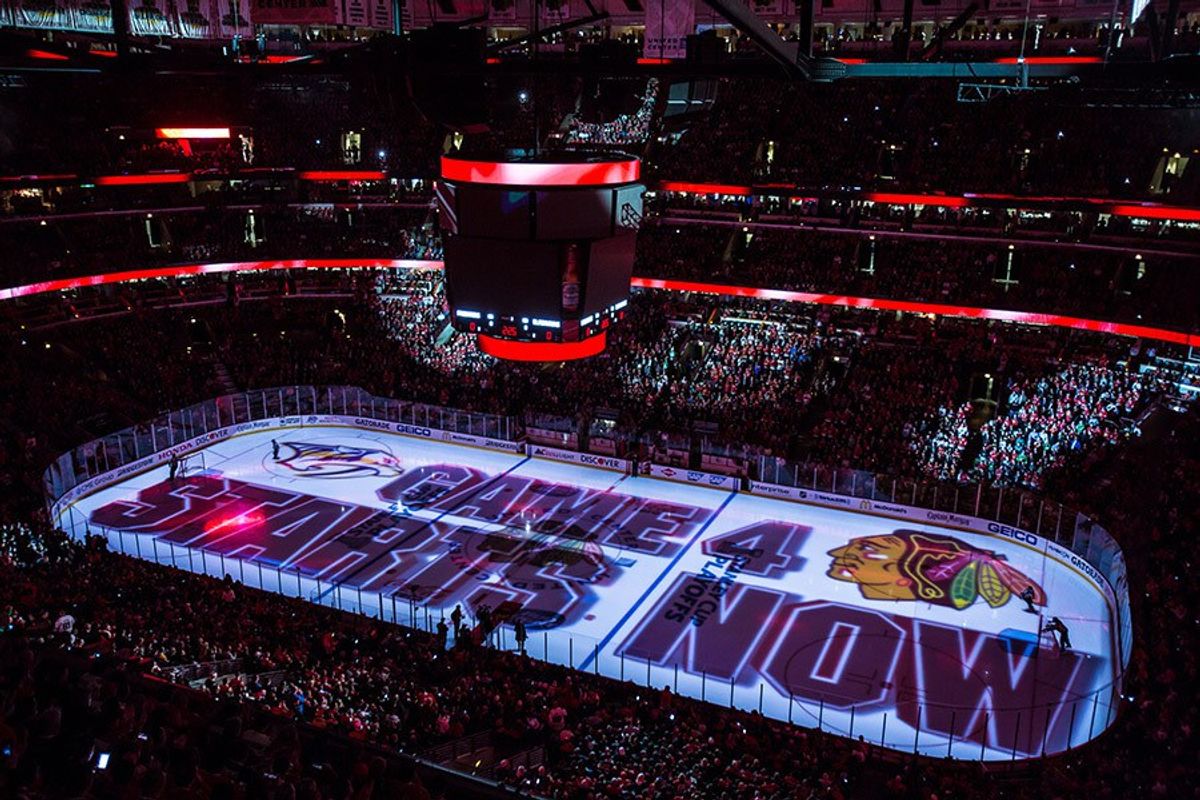 The Chicago Blackhawks are currently in first place in the Central Division and in the entire league with the former Stanley Cup Champions only right behind them. This means that Blackhawks games are going to be intense, exciting, and there's going to be a battle for the first place spot over the next few months of the season.

With the games being more exciting than ever, I recommend that every Chicago fan try to make it out to the United Center for one game. If you've never been to a Chicago Blackhawks game before, you're missing out on one of the greatest sport experiences in your life because there are so many things you don't get to see while watching the game at home.

Yes, they show the anthem on TV. Yes, it is amazing to watch on TV. But it is NOTHING compared to standing in the UC listening to the roar of the crowd. Jim Cornelison's rendition of the National Anthem is the best in the nation, no other sporting event has one like it. The fans of the Blackhawks have been cheering during the anthem since the Hawks played in Chicago Stadium, the only thing that's changed is the intensity. Not only do the fans cheer excitedly, but there's one thing that happens in the crowd during the anthem that isn't shown on TV. During the line: "That our flag was still there," Cornelison gestures towards the flag, sporting his Stanley Cup Championship ring, as do all the fans in the crowd. No matter where they are seated in the arena, fans are mirroring Cornelison and throwing their hands out towards the flag, a tradition that's been developed in the past few years.

This is something that can be picked up on while watching the game, but it's very rare that it becomes vocal enough to be picked up on by the microphones. Throughout the succession of the game, fans will whistle out three loud whistles in a row. Once this is heard, other fans will answer back with three more whistles. This travels across all the sections of the arena and happens multiple times throughout the periods. It occasionally can be heard on television if it becomes loud enough.

Every sports team at every arena has an intro video that is played right before the National Anthem to pump up the crowd and increase the hype for the game. The Blackhawks, in my opinion, have one of the better intro videos in sports. The video includes the stitching of the Blackhawks head and the showing of all of the team's previous superstars and clips of the franchises's previous championships. The music selection for the video builds throughout and peaks near the end which gets the crowd excited for the anthem and for puck drop.

Obviously, you're not going to see the intermission activities when you're watching the game at home, so here's a breakdown of what normally happens. During the first intermission of the game, the Blackhawks will invite two youth hockey teams to the ice and will set up a relay race. Both of the teams will race and the crowd will get behind them if they aren't already out getting drinks or going to the bathroom. During the second intermission there is the shoot the puck challenge where they will have one man, one woman, and one child shoot a puck from center ice towards the net through three slots to advance to a one slot challenge to win a car. Sometimes this will be aired on television if there's a celebrity present to shoot.

When the game cuts to commercial during the period, the ice crew is coming out to do a quick clean up of the ice, the t-shirt parachutes are released from the ceiling. When these little while parachutes are released, members of the crowd become tug of war competitors. There is also a small breeze that flows throughout the arena, so the parachutes will get caught in the breeze and blow from one balcony to the section below, leaving fans leaning over and grasping at nothing but air. I have gotten into a tug of war match with someone a few rows in front of me, but ultimately stopped pulling when I noticed the fan was there with a little kid. While these are falling down, Tommy Hawk is also shooting shirts out into the crowd with his t-shirt gun.

Perhaps the greatest part of the live game. When the Hawks score, the goal siren sounds and The Fratellis, "Chelsea Dagger" blares. It is the most amazing thing to watch over 20,000 fans jump up simultaneously throughout the arena and lose their minds. And then, when the most hated goal song in the NHL reaches the "Da da da" part of the song, members of the crowd are dancing and singing along without a care in the world. Everytime the home team scores, there is a moment after when play resumes that everyone's heart rate is up and their sitting on the edge of their seats eagerly waiting and wanting more.

There are a few more live game only experiences that take place throughout the game, but these are the most significant. What I'm trying to convey to everyone is go to a game, live the experience that is Chicago Blackhawks game, you won't regret it. There's not a bad seat in the arena when you're watching hockey, you can see almost everything no matter where you're at. So grab a slice of Digiorno's, grab a beer, and hit the dagger.