While this phrase is correct in the theory, it is incorrect in terms of focusing on the dying demographic. 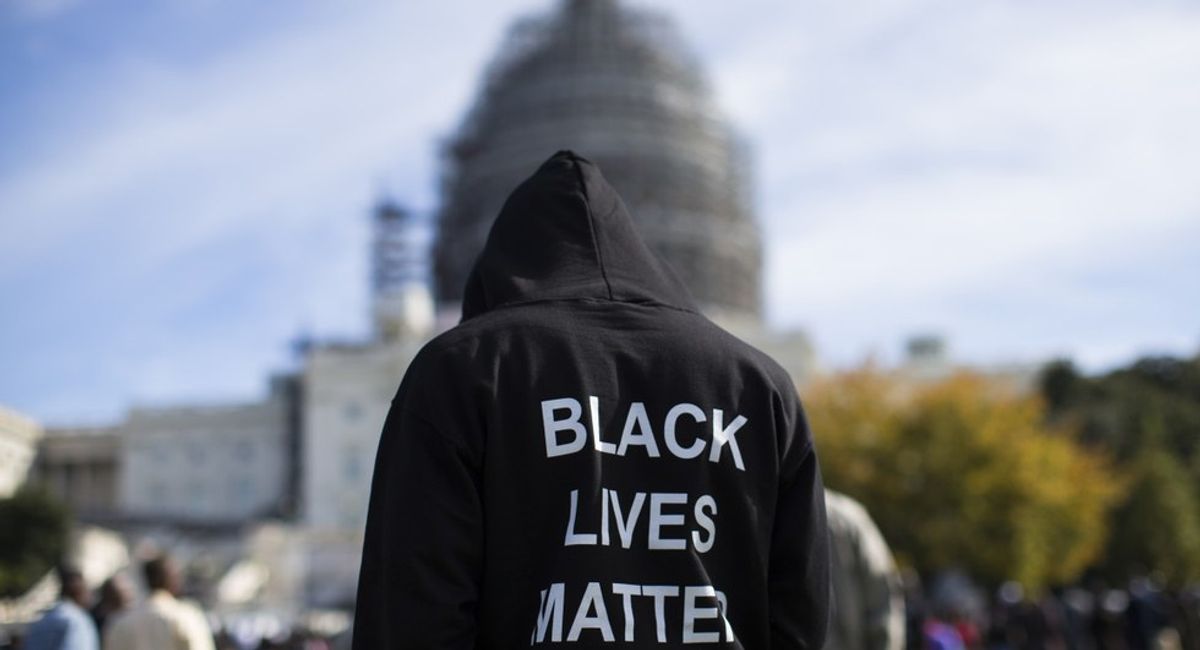 Over summer, I was assigned the task of writing an informational yet controversial paper. Me, having an extensive knowledge and very involved stance in the Black Lives Matter movement, thought that I would write a very interesting article about it. After rereading it several times, I do believe that sharing it with the general public would benefit me more than just knowing my professor head read it. Bellow this passage you will find said article, including citing incidents of death and many more controversial opinions surround the Black Lives Matter movement.

The controversy between the two terms, about which lives really do “matter” is not meant to start any type of controversy or race wars, although that is what it has started to do. The difference between “All Lives” and “Black Lives” is simply the focus of who is being talked about, in this case, we are focusing on who is being murdered by law enforcement. To properly understand the need for emphasizing black lives over all lives, a slight history of the origins of Black Lives Matter is needed.

On February 26, 2012, a young unarmed black teenager, Trayvon Martin, was shot and killed by George Zimmerman. This incident sparked national controversy between law enforcement/nightly watchmen versus racial profiling. After this, on July 13, 2013, George Zimmerman was acquitted of his murder charge, causing outrage from the black community due to the wronged trail of a young boy. After the acquitting of Trayvon Martin’s murderer, three young women came to the consensus of forming a “hashtag” (#) titled Black Lives Matter or BLM, for short. This “hashtag” was kept relativity tame, until the death of Mike Brown, who murdered by Darren Wilson of the Ferguson Police department. This is when more people became aware of the hashtag and started to go to the streets to start what I would like to consider a “positive movement”.

Soon after the uprising of the Black Lives Matter movement, more movements started popping up in order to emphasize their own struggles, such as “Brown Lives Matter”, “Asian Lives Matter”, whatever race could be imputed into the “black” spot was done. Soon enough, this was simply condensed into being considered All Lives Matter, which as I stated, is not an incorrect statement, but it is one that does pull away from the main topic at hand, which is the death of Black people, mainly black males.

The term All Lives Matter did not come out until after the term Black Lives Matter, which shows that somehow the latter, makes people uncomfortable or feel left out. Saying that All Lives Matter doesn’t completely mean that you are conveying that you don’t believe that Black Lives Matter, but it does show that you aren’t comfortable saying that another race’s life and problems might be beyond yours. John Halstand wrote an article titled “The Real Reason White People Say "All Lives Matter,” which gives an insight into why people do not appreciate the feeling of being left out of a social phenomenon that is taking over the nation. In regards to the statement All Lives Matter, another term equally as poor in taste has come about, following the recent deaths of police officers, titled “Blue Lives Matter.” This hashtag is far worse than All Lives Matter, only because people felt so upset by the deaths of police officers, that they felt that their lives, for if only a minute, needed to be put in the lime light because they had suddenly felt threatened. Coincidently enough, this is exactly what the Black Lives Matter group has been trying to do for years now, before being met with this depressing adaptation of something that was meant to help black people come together in a time of social upset.

When we take a look into the creation of All Lives Matter, there is little to no background information on when this term was coined, aside from the fact that it was after Black Lives Matter. The general statements that follows people who believe in the All Lives Matter campaign is one that shows that they don’t believe in focusing on the fact that another life is more important than someone else’s. They think that it’s about everyone being treated equal and that we are just trying to help promote racism, although this is not the case. The problem is that if we try to focus on the fact that All Lives Matter, we ignore not every life being treated at the current moment, since we do have a lack of murders of people of other races.

For example, most of the murders of unarmed citizens, has been mostly of black people. Many people do try to pull up statistics that say that white people are being killed by cops at the moment as well, but these tend to show that the person was behaving extremely violently as well and that the cops had no choice other than to really kill them. On the other hand, though, there is overwhelming statistics showing that black men are being shot and killed, more recently in the cases of Alton Sterling who did, according to police reports, have a gun, but was not threatening the cops with it. This also does not explain why the cops had to shoot him at point-blank as well. Days after this, Philando Castile was killed in his car, while having a license to carry a weapon. For no reason, police officers shot him in the arm/chest area several times, because he had admitted to having the gun. If he did not say that he had one, there is a very good chance that he might still be alive today, but instead he was killed for legally owning a weapon that made police feel unsafe.

Even with all focus on men being killed by cops, their all also women who are being targeted as well. In the case of Sandra Bland, a black woman who was pulled over for a routine traffic stop, ended up dead. The process of this women’s death was one that confused everyone, with the overwhelming amount of evidence showing that she might have died before arriving to the police station. The evidence was mainly that in her mug shot she appeared to be dead and that in the security camera footage, the time where the officers claimed she “committed suicide” is missing from the tapes. This entire ordeal was another strong case in the Black Lives Matter movement which had a lot of people speculating the loyalty of police officers to their people. This was one of the most controversial cases in terms of death in police custody due to the missing tapes and changing stories from the cops that were present.

Of course, even during all these types of murderers occurring, people are still trying to justify what is going on. People tend to say “Oh, it’s happening to white people too!” and “Blacks aren’t the only ones getting shot!”. While that is true, it is not the full entire truth, seeing as there are more black people getting shot then there are white people or any other race at the current moment. This leads me to talk about just how many people have died recently in just 2016, that were mostly black. There has been 653 people in just this year alone, which only proves that this is a growing problem, since people are, as the numbers show, being killed at a senseless rate.

The problem with this is that there is strong evidence that many people are currently dying, such as Alton Sterling, who shouldn’t have been killed, and people who are majority white and partake in mass shootings, get taken into custody without being harmed. It, in general, is very sad that this is how society treats black people and the movement Black Lives Matter is shunned by people who aren’t of color. Sadly, this might never change and it just goes to show how black lives aren’t being focused on how they should be.