Is Scandal Good For Baseball?
Odyssey

Is Scandal Good For Baseball? 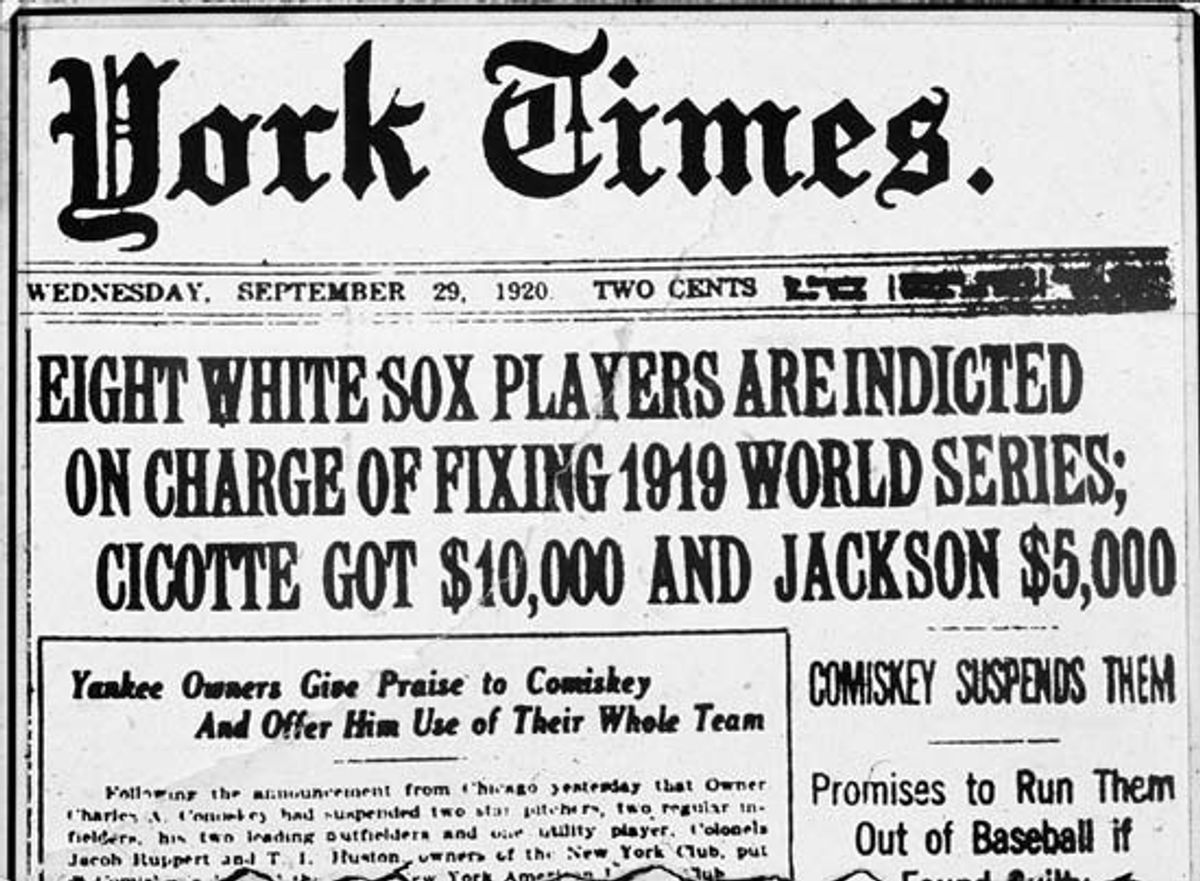 It’s April and you know what that means. Baseball is back! The summer long sport is through its first week. Despite the welcoming party from loyal fans and returning alumni, the MLB, or Major League Baseball, might be declining from its self-proclaimed title of ‘America’s favorite pastime.’ A major factor is that heroes of the game, players who we’ve rooted for all our lives to break career records and bring our hometown team to the World Series, used performance enhancers to help get them get the edge over the opponent. As we enter 2016, baseball struggles to compete with other sports like the NHL or the NBA, who have changed in order to benefit the fan. The game also has the stigma of cheaters over it. So can having this “edge” boost baseball back to its rightful place on top of the sports world?

Baseball has never been a stranger to controversy. Even in the creation of the league in 1869, the argument of illegal betting went on. Baseball was so small at the time, players still had to work full time jobs in the offseason. It was to be rumored that players can be easily bought off and lose games on purpose. A prime example would be the Chicago White Sox in 1919. The White Sox played and lost the World Series that year to the Cincinnati Reds but rumors that they lost the Series on purpose cultivated and the MLB was forced to investigate. In the end players Eddie Cicotte and Shoeless Joe Jackson confessed to the Chicago grand jury that they lost on purpose. Both Cicotte and Jackson, along with six other members of the team, were banned for life. The team in 1919 is now referred to as the ‘Black Sox.’

Despite the bad publicity, baseball took on a new era in 1920. Before that is was referred to as the “Dead-ball era,” because of the lack of homeruns. The Black Sox scandal may have not even been a setback in the modernization of baseball. In fact, it could have led to the league’s growing popularity in the ‘20s.

The Pete Rose controversy is a scandal that has since been rekindled. All-time leader in hits, Pete Rose was accused of betting for and against his team in the late ‘80s. Destined for the Hall of Fame and managing the team he played for all but one year of his career, The Cincinnati Reds, questionable actions from Rose caused an investigation. Rose was accused of betting on games while being manager of the Reds. He was banned from the MLB in 1989 and denied reinstatement. Rose, who has applied for reinstatement every year since he has been banned, came clean in his 2004 autobiography My Prison Without Bars. He claims that he did bet, but only for his ow team. Rose has spoken out many times that he should be forgiven as he paid for his crimes. In 2015 he signed a contract with Fox that includes him in baseball broadcasts. Pete Rose should be reinstated for the value he can bring to the fans. A fan favorite, he holds a record that may never be broken, and is an obvious hall of famer. Being such a big part of MLB history, it is wrong to ignore one of the game’s greatest players.

In 1994, baseball was threatened yet again. Players in disagreement with the MLB on a new Collective Bargaining Agreement, ended the season early and went on strike. It was the fifth time in 22 years that players either had a strike or lockout and, for the first time since 1904, the World Series was not held. Fans were not pleased and saw this as an act of war. Attendance and television ratings plummeted and the MLB saw a decline in attendance of about 20% in the 1995 season. It seemed this would be the demise of the MLB as we know it.

A saving grace came in 1998. Mark McGwire, of the St. Louis Cardinals, and Sammy Sosa, of the Chicago Cubs, raced to break the homerun record of 61 homeruns in a season, set by Roger Maris in 1961. Both players were known for being homerun hitters and by the end of the season both broke the record. McGwire respectively won the race, having 70 homeruns to Sosa’s 66. During spring training it was thought the race was to be between McGwire and Ken Griffey, but Sosa tied Griffey by the end of June. Griffey wasn’t able to keep up in the coming months. The homerun race brought fans back to the games. Even those who still felt robbed from 1994.

Three years later Barry Bonds would break the record and brought on the question of performance enhancers. Before the season Bonds never hit over 50 homeruns in a season, so hitting 23 homeruns over his average created the buzz that he was, in fact, cheating. Pictures also emerged, showing that since the year before in spring training, Bonds appeared to double in size.

The interest of Sosa, Bonds, and McGwire all avoiding steroid questions from the media caused a report by baseball official George Mitchell to create the Mitchell Report, a report on steroid use in the MLB. The report, released in 2007, held the names of 89 players who were linked to steroids throughout their careers. The list included David Ortiz from the Boston Red Sox, and Alex Rodriguez from the New York Yankees. Though the investigation could not suspend any of the 89 players, it did bring up the scary fact that baseball wasn’t even aware that players were using illegal substances. That, or they did not care. In 2010, McGwire admitted to using steroids throughout his career and even in the year he broke the record. It was also found that Sammy Sosa was using a ‘corked’ bat. All of this caused the period of baseball between the late ‘90s to the mid-2000s as the “steroid era.”

In the ‘Black Sox’ and Steroid Era controversies, baseball gained popularity in times that the game experienced lulls in popularity. Also, in times like the expulsion of Pete Rose and the other controversies, popularity did not plunder. With that in mind, barley any changes have been brought to the game to quicken the pace of the games, or to create a new interest. It has to be embarrassing to the MLB that some of their best attendance is linked to the steroid era. The MLB is trying to hold on to the integrity of the game and uphold as a popular sport in North America, but it may not be able to hold up the weight of being a fair game and keep up its level of entertainment. With these controversies o their track record, I call upon the MLB to make changes to rid the atmosphere of scandals