How Georgia Lale Is Confronting Xenophobia With Art
Odyssey

How Georgia Lale Is Confronting Xenophobia With Art

A Greek Visual Artist is changing the way mainstream media appeals for immigrants and refugees. Her protest makes noise but no sound. 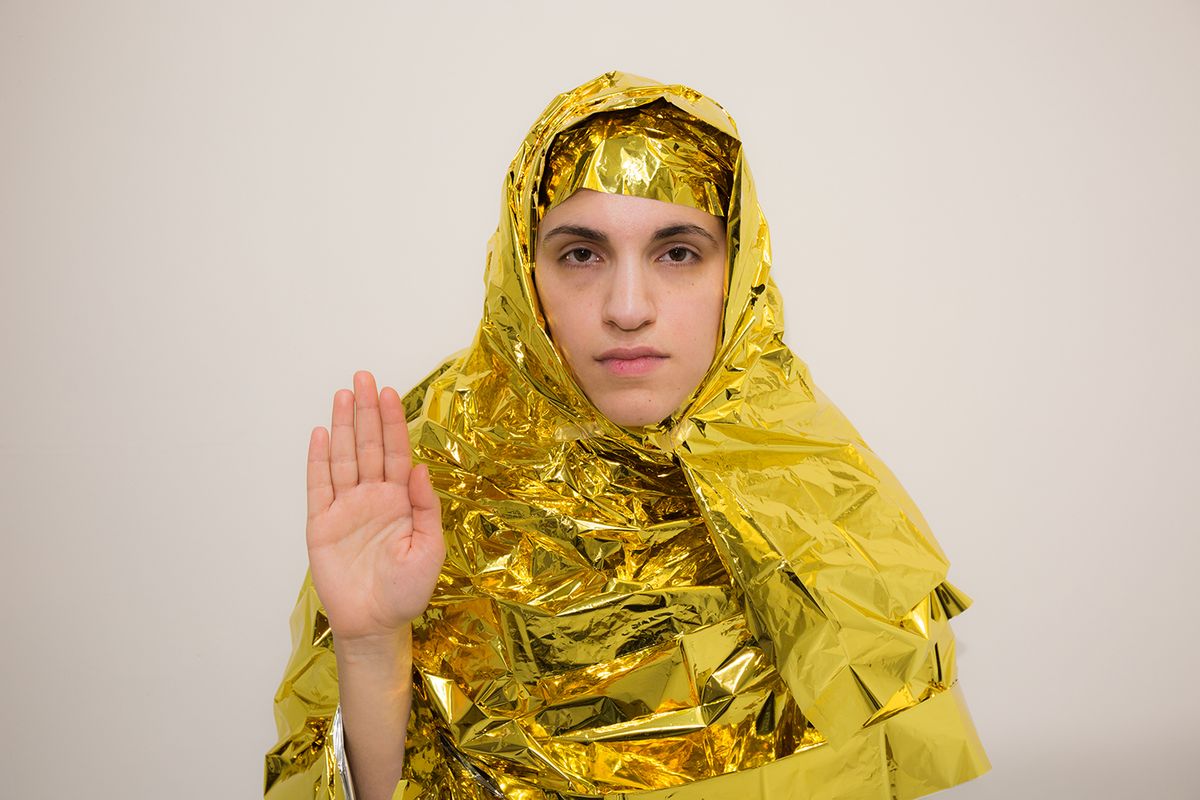 It wasn’t until #orangevest went viral that Georgia Lale’s work received recognition. The 28-year-old Greek artist swam through New York City streets wearing an orange vest with black clothes underneath it: the vest symbolized hope for refugees trying to reach European borders and the black clothes honored the lives lost to the Aegean Sea.

Her first solo intervention took place at the Metropolitan Museum of the Art. Wearing the orange life vest, Lale walked from the museum’s Syrian-Arab galleries to the Greek galleries. The second performance was at Times Square where people mostly ignored her presence on the streets.

But it is normal to ignore what makes one feel uncomfortable, and every sensation generates attention and, later on, reflection.

Lale, who had come to the city in 2014, pursued her master’s degree at the School of Visual Arts and documents Refugee crises ever since. One of her recent projects is called “Emergence” and is a statement on the uprising of xenophobia and racism against Muslim refugees, immigrants, and USA citizens.

What influenced your decision to move away from Greece?

It was my dream to come to NYC and establish a career here. I decided to leave Greece even though I was doing pretty well with my career but the community was too small; I couldn’t expand and I wanted to speak out louder to a bigger audience. I needed more like a multi-cultural audience and that wasn’t so easy to find in Greece. After the financial crisis, things were getting more and more difficult not just for visual artists but also for everybody. My projects only really gained a status after I shifted to NYC.

How did #orangevest come about?

Initially, these performances were solo and I had no support. But it soon gained momentum when other artists came forward to join the cause. The performance was based on the usage of public spaces in the city and attempted to create an aesthetic balance between a protest and work of art.

The performers did not disturb everyday public routines: they were simply present and quiet. They spoke to the people around them only if they were questioned about the nature of the performance.

I think social media really played an important role in the popularity the performance gained. The outreach was great since #orangevest was performed in New York City, Washington D.C, Philidelphia, and Brussels. I was later invited as guest speaker at a panel discussion in Yale where I spoke about the role of an artist in the changing era.

How has your personal life influenced your artwork?

My great grandmother had to flee from Turkey with her six kids during the war that broke out between Turkey and Greece. She gave birth to the youngest one on the boat itself! Her husband had to dress as an old lady in order to avoid labor camps the men were forced into. Two of the youngest kids died due to lack of aid and austerity.

My grandfather came with his mother and the rest of the siblings at the age of five, and after he died, we figured that he was actually circumcised, so he was probably an adopted child of a Muslim family. We also found some adoption papers later on. I have the feeling sometimes that I might have some lost roots here and this makes me feel closer to the Muslim and the refugee community. There are a lot of misconceptions about what being a Muslim is and I want to familiarize myself with their culture.

How would you describe the daily routine of an artist?

As an artist, I don't have free time. I'm always thinking about my art. I consider everything that I do as work. If I need a break, I would go shopping or go out for dinner. My ideal day consists of: work at the studio, reading, watching the news, spending time with my husband and going to an art show or at the movies. I love being by myself at the studio but I also enjoy socializing. I spend most of my time with people that are not directly related with the art world and I'm speaking with strangers all the time. I like to hear what the have to say and learn from them and their experience of life.

So how does Europe and America go hand-in-hand in your artworks?

Americans don’t really understand how privileged they are. As a Greek artist based in NYC, I am always trying to find a balance between Europe and America and create a cultural mix or establish some kind of intersection. Europe is going through a financial and a refugee crisis. We also have a Neo-nazi party in Greece and they are protesting outside schools were refugee kids are going to learn Greek and participate in other programs. I am really sad to see this and this is not just happening in Greece but all over.

At the conference in Yale, politicians and policy makers were advising upcoming politicians in Europe to base their campaigns not on facts but on emotions after the presidential election results in America. You see everything is changing and everything is connected.

What is your next project about?

My last piece is called Emergence and is a statement on the uprising of xenophobia and racism against Muslim refugees, immigrants and USA citizens. I'm very sensitive when it comes to cultural identities and the human rights of freedom of speech and of expression of beliefs. No one must ever feel that they need to hide his/her cultural identity or religion beliefs in order to be accepted by the society.

Where do you see yourself in five years from now?

I can't tell you where I see myself in five years. What I can tell you for sure is what I will be expressing through my art: our times. Art can be more effective at conveying a message than a news report since we have become desensitized to images and statistics of tragedy. And that is why I would never stop producing art.