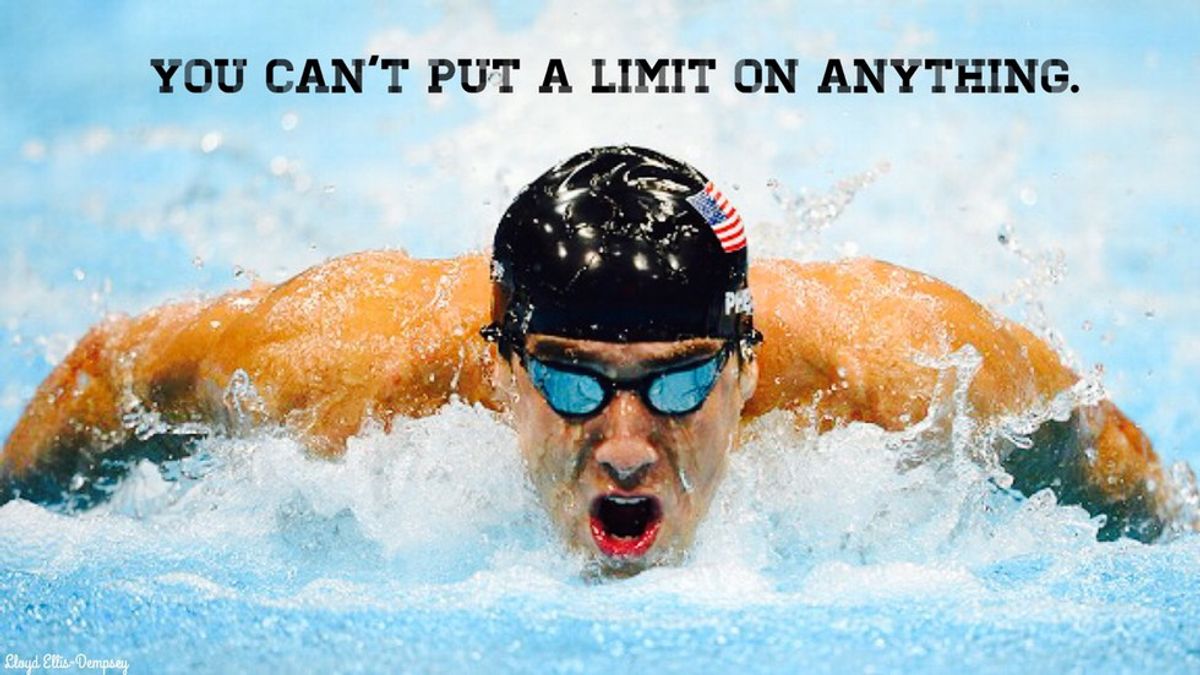 Michael Phelps. You know his name and you most likely know his story. He's obtained more gold medals than anyone could want, he's set and broke olympic records, he's proved that he is as good as everyone says he is. Let's be real, America is in love with Michael Phelps. Here are some reasons why!

Americans love olympians. He, among hundreds of others, are representing our country in the biggest games of the summer. (Plus he's killin' the game.)

There is no doubt that Phelps is a god in the pool. Michael Phelps can swim better than I can walk. He glides through the water like a warm knife in butter. Basically, he's good. So good in fact...

He has the most olympic medals. Michael Phelps holds a total of 28 olympic medals. That's a lot of hardware for one person. If you ever need help stacking your Olympic medals, ask Phelps. He's got you covered.

4. He has enough gold for a life time.

Most olympians main goal is to get the gold. Needless to say, Michael Phelps has gotten the gold. 23 of them to be exact. He has more gold medals than anyone.

5. He cries during the anthem.

You would think that after 23 gold medals he would be used to standing atop the podium, gold around his neck and his country's song playing loud and proud. To this day, Michael still gets teary-eyed during the national anthem of the United States.

There is no doubt that athletes are creatures of habit. That does not stop with Michael. Prior to each race, he stretches and slaps his back with his crazy long arms. (Seriously who's arms bend like that?!?!)

Stone-faced and ready to swim is a pretty accurate way to describe Michael Phelps. Do not speak to him, do not touch him, do not breathe near him prior to a swim (unless you want him to drown you).

One person Michael Phelps definitely wants to drown is Chad le Clos. Chad le Clos beat Phelps in 2012 and has not let him forget it. In response to his taunting, Michael sat pout faced and ready to rock. If looks could kill, le Clos would be le-out-of-luck.

And guess what, he knows it. When he inevitably beat Chad le Clos at the Men's 200 meter Butterfly final, the same event that he lost to le Clos in 2012, Michael had to give a little jab at his ol' friend Chad.

10. When he smiles, the sun gets jealous.

He is a beautiful human that should be protected at all costs. His smile is so bright that the sun has to put on shades.

Michael Phelps has large ears. You can't deny it. You just can't. But! They're one of my favorite things about him.

I might be biased if you couldn't tell. I also really like Michael Phelps. And his face. He also makes these odd but endearing facial expressions.

From head to toe, it is clear Michael Phelps is a swimmer. From his freakishly long arms (his wingspan, tip-to-tip is 6'7". He's only 6'4") to his defined stomach, hips and waist to his crazy strong hips and legs. His body screams "I SWIM FOR A LIVING!!!"

When he talks, Michael has the littlest tiniest lisp and I find it amazingly endearing. I love hearing the different voices and accents of the way people talk, and Michael's voice is no exception.

So there it is. 15 reasons that America is in love with Michael Phelps. There are more, a ton more, but these are my favorite reasons! I hope you enjoyed the greatness that is Michael Phelps.