8 Years After The 26/11 Attack: We Will Never Forget The Victims And Continue To Work For Peace
Odyssey
CurrentlySwoonLifestyleHealth & WellnessStudent LifeContent InspirationEntertainmentPolitics and ActivismSportsAdulting
About usAdvertiseTermsPrivacyDMCAContact us
® 2023 ODYSSEY
Welcome back
Sign in to comment to your favorite stories, participate in your community and interact with your friends
or
LOG IN WITH FACEBOOK
No account? Create one
Start writing a post
Politics

8 Years After The 26/11 Attack: We Will Never Forget The Victims And Continue To Work For Peace

We must honor their memories by ensuring that our future generations do not suffer the way we have for 69 years. 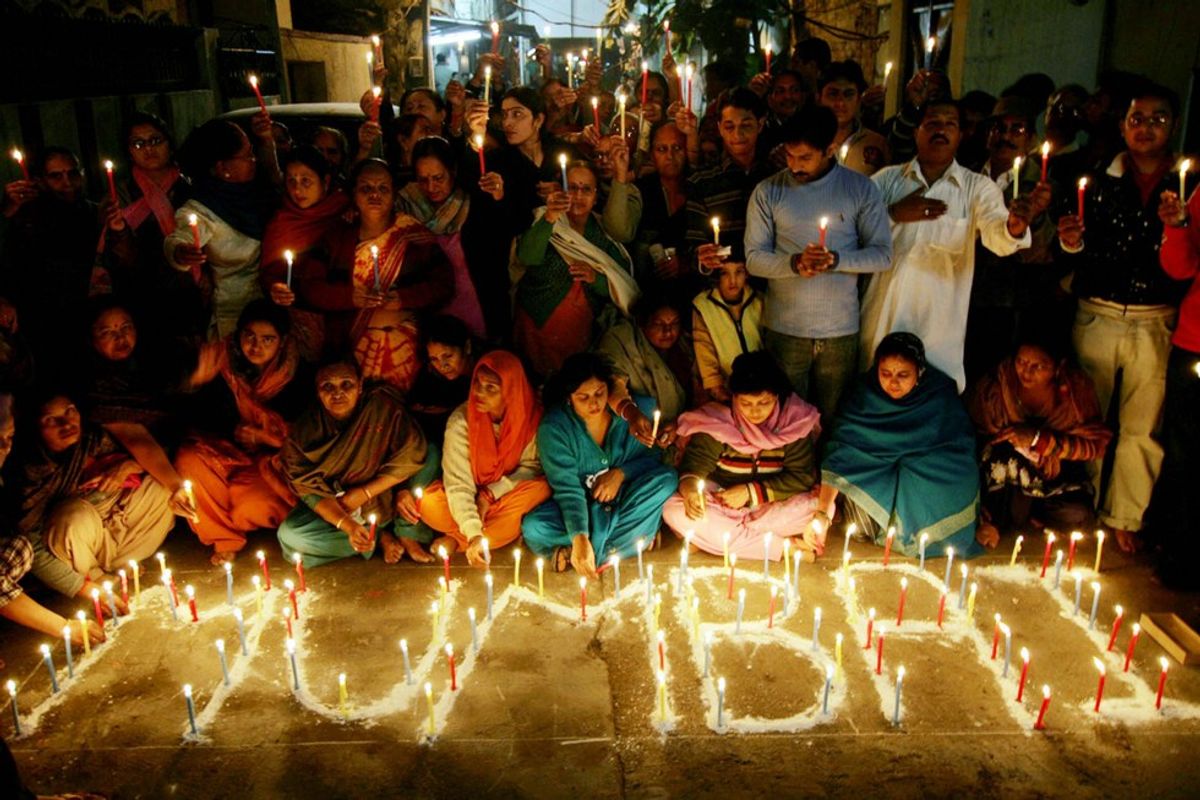 November 26, 2016 marks 8 years since the 26/11 attacks, which snuffed out the lives of 164 innocent people, and irreparably damaged the lives of countless others. For those of you who are unaware, on November 26, 2008 there was a series of 12 coordinated shootings and bombings throughout Mumbai which ultimately ended on November 29th, 2008 after carrying on for 3 days. The perpetrators of these heinous crimes were members of the Lashkar-e-Taiba, a terrorist organization which operates from Pakistan.

Unfortunately, it is attacks like these that bring us to our knees. It reinforces the sad notion that no matter how many people advocate for peace and unity between our two nations and multiple faiths, all it takes is one person or one small group of people to shatter the hopes of those who have been waiting for 69 years for our two nations to get past their baseless feud. And in the meantime, poor souls like the ones in Mumbai on 26/11 are the casualties. Those people had goals and dreams, families and friends. They were young and old, Hindu, Muslim, Christian, Sikh, Jain, any faith you can think of. There were brave law enforcement officials who selflessly sacrificed themselves while doing their duty, who must never be forgotten. All of these people had bright futures which were extinguished, loved ones whose lives have been permanently scarred by tragedy and loss. It is important that we celebrate their wonderful lives and the difference they made to the people they loved, and mourn their heartbreaking and early departure from this earth.

Despite what politicians and media try to make us believe, terrorism has NO religion whatsoever. Murdering innocent people has no place in any faith. And the aftermath of attacks like this will only serve to tear us apart and turn us against one another, fuel more hatred and enmity. Do you know who this benefits? The terrorists (on both sides) who want to recruit for their cause (whether it is a Hindu nationalist party or Lashkar-e-Taiba) by showing the people they lure that they are despised and unwelcome by the public, the politicians who want to further the divide in the interest of their political agendas (which is to keep our nations at each other’s throats, deflecting the focus from their inadequate leadership and abilities to address the real issues of the nation such as poverty, illness, education, etc.), and the media who want to magnify the enmity and animosity, portraying events with their biases and one-sided opinions. After all these years, they are the only ones who have actually gained anything from these heinous crimes. We are the ones who ultimately pay the price, whether it is with our lives or our continued antagonism and enmity or the loss of friendships and relations across the border.

We must unite against terrorism and extremism, not Islam, or Hinduism, or Pakistan. As I have stated in previous articles, religious extremism is entirely political. People who try and recruit for their cause use religion and nationalism because politics is not a something everyone is able to grasp, while religion and nationalism are both not only concepts that are understood by most people, but are concepts that they are exceedingly passionate about. This is a phenomenon present in individuals of all faiths, nationalities, and backgrounds. Are religion and nationalism to blame? Absolutely not. Those who manipulate and twist religion and nationalism for their own political agenda are the ones who must be condemned, because they are responsible for promoting the antipathy and hostilities which plague us today. Hate will never be wiped out by hate. The only force against hate is love and friendship. Whether the assault is in Mumbai or on school children in Peshawar, all of humanity suffers and feels the loss, and if we let politics and prejudice divide us, then our soldiers and the deaths of the innocent victims in this tragedy along with the countless others will truly have died in vain.

In the 8 years since 26/11, how much progress has been made? True, bringing actors across the border from Pakistan and airing Pakistani dramas in India has had a tremendously positive effect in building borders, but still our governments insist on creating conflict when there is a lull in the feud, such as the chain of events in Kashmir recently. And we still have warmongering politicians and media who insist turning their citizens against their “enemy”. If we truly cared about the lives of the soldiers on both sides of the border, and the victims of violence, then we would ensure that our relations are strong and that we are united against the common enemy, which is extremism and terrorism. Keeping the antagonism alive just keeps the cycle going, while the only permanent solution is peace and solidarity. This is not a problem that will be solved overnight, but if we want any type of consistent progress to be made, we have to be adamant about calling out our governments and our media when they are biased and not putting the needs of the people first. The extremists who execute these crimes will do so whether there is peace or war, because their that is what their mentality dictates. If there is peace, they will stir up antagonism to cause war. If there is war, they will do whatever they can to ensure that war continues, including attacking more innocent people. Dividing us has only made it easier for them to carry out their plans, because it is easy to break the chains when they are already weak or nonexistent. The only real chance we have is working together to wipe them out, because that is what strengthens our bond, and makes it more difficult to penetrate. It won’t be easy, and it won’t happen overnight, but it will happen if we give it time and if we continue to work against them. As I have said before, peace takes time to achieve, which is what makes it difficult and taxing, but the results are more lasting, and make the effort worth all the struggle. The citizens of our nations are worth it.

My heart and prayers are with the loved ones of those who were lost 8 years ago, and with the people who were injured or affected by these events. May you all have patience and strength as you continue to feel the absence of those who were snatched from you too soon, and may those whose lives were changed by the trauma they suffered continue their healing. Know that us advocates for peace are always with you for support and solidarity, regardless of religion, caste, nationality, or any other divisive factor. We stand united against this unspeakable tragedy and all those like it.

It is my sincere hope that in remembering and praying for the innocent souls who lost their lives 8 years ago that all of us honor and commemorate their memories by making sure that our children and their children and so on don't have to suffer the way we have, the way our predecessors have. May they rest in eternal peace, and may we achieve the change and unity that will prevent the grief of future generations to come. We will never forget.