Which is about 73 more thoughts than anyone watching this trailer is meant to have. 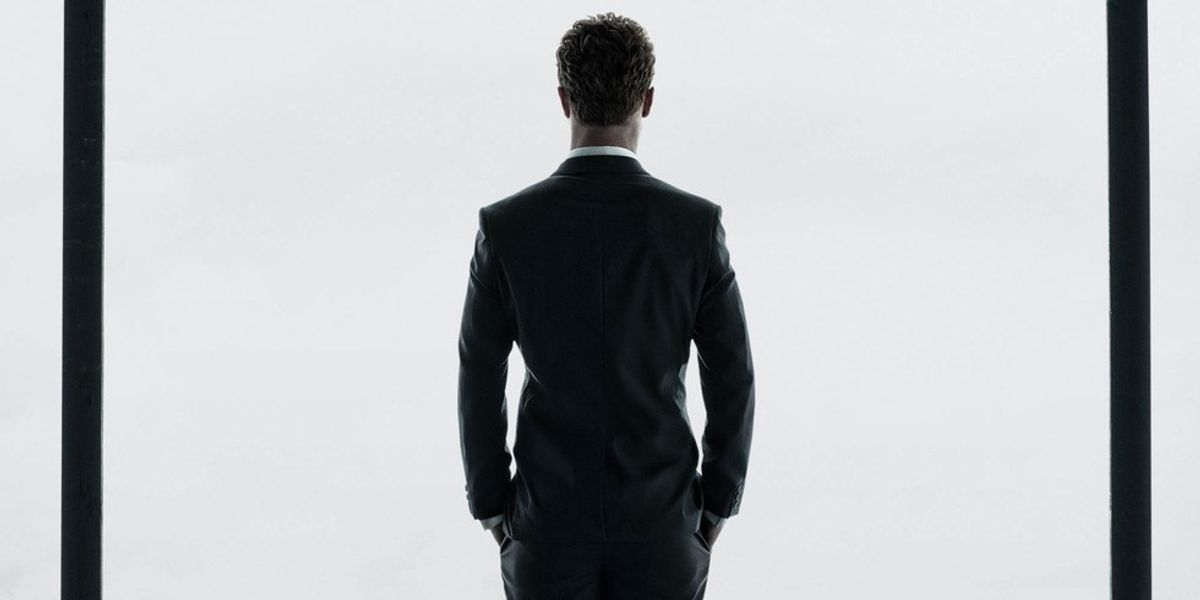 1. Ooh, Christian viewing fireworks over a lake. How patriotic.

2. Oh, Valentine's day. I wonder if this is going to be a romance film.

3. A gift wrapped in gray. Just a coincidence, I'm sure.

4. Okay, trying to forget the past, but instead thinking about what I had for breakfast this morning.

5. Grey puts on a black mask, so we have no idea who he is. Is this a metaphor for how inaccessible his emotions are?

6. Slip into what? I'm already wearing clothes. A pool? A hot tub? That does sound nice.

8. Black stilettos and long scan up sexy lady leg. My brain has officially registered the sexual tension meant to draw me to this movie. Thanks for letting me know, filmmakers.

10. "Something a bit darker." But I'm already wearing black, which is darker than grey, Christian. You should know because Grey is your last name, which is totally just another coincidence. The title has "Grey in it" and you are Christian GREY.

11. "Intrigued?" This has definitely happened before...

12. What are they looking at? Is there another torture room? Are they playing Bloody Mary?

13. He just put that mask on, and now it's back in the gift box. Was that a magic trick, or is the concept of two masks furthering the metaphor?

14. Close up of Anastasia putting on a gray mask may also be furthering the metaphor. Because he's wearing a black mask, which would mean she pales in comparison. Or her innocence?

16. Wait, didn't she totally ditch him at the end of the last one? Why is she with him? Did I miss a sequel?

17. Christian wants her back. Wasn't she literally just with him at the renaissance fair? I must have missed something.

19. Beyonce's Crazy in Love is playing, just like in the first trailer. But this time, she's not singing it. That's definitely a bad sign.

20. "I had no idea what this was going to become." You are alone there, Christian.

22. Ana, you don't see how your volatile relationship with Christian can work? Don't you know you're in a corny romance?

23. Oh my goodness, Christian! You scared me. Don't be standing behind me like that at an art gallery opening. I have to tell my boyfriend that all the time.

24. *GASP* It's Anastasia's art show! There's a GREYscale photo of her behind her. Ha

25. We're gawking too, Christian, but only because we're trying to figure out this plot line.

28. Fireworks, but this time Christian isn't alone. Daw. Is THAT the plotline?

29. I think we all know what she wants, Christian.

31. I bet that's the only chin-up he can do unassisted.

32. What was that sequence of scenes trying to say?

34. Sailing. Omg I just remembered that Daenerys Targaryen is sailing for King's Landing as we speak. YASSSSSSSSSS KHALEESI.

35. Why do we have to wait until next summer for Game of Thrones?

36. I am definitely being brainwashed.

38. "No punishments." Other than this movie.

39. I wonder how much it would cost to get a sailboat license.

40. Ana is wearing a ballerina bun. Maybe this film is actually about her exploring her identity and long lost childhood dream of being a dancer.

41. I can't wait for Ellen to parody this trailer.

42. Does my gym offer ballet lessons?

44. Oh, I see. The white bow and ballerina bun are just there for the redundant metaphor for Christian's destruction of her innocence. Literally. The bow was just undone.

46. Christian, you better put a sock on that door before you close it.

47. There is a woman in the kitchen, AKA a threat to Ana's already fragile trust towards Christian. Or just a ghost.

50. The way these scenes keep fading to black, you'd think the trailer creators just tossed some random scenes together with a Beyonce cover to make it look like something interesting. But what do I know?

51. That old lady looks that Christian just glared at and Ana stalked away from is like a AHS third season Jessica Lange knockoff, except not nearly as hot.

52. No, no, no, mister. Do not pin Ana to the door that way in such a threatening manner just to pave the way for Christian's valiant rescue/undeniable proof that he loves her.

53. This is definitely a horror adaptation. That man just silenced her with his finger.

55. There are so many shiny black Audis coming out of that parking garage. Must be the president. Glad to know the secret service is there for the important things.

56. Christian's bow tie is undone. He must have gotten into a fight, but came out 100% unscathed. Maybe he hit someone with his Audi.

60. I think the trailer music is skipping.

62. Ana! There's a creepy dude in a mask behind you! It may or may not be the same guy that came onto you in your workplace. He's wearing a mask, so no one knows.

63. Yes Ana, run into his arms from the scary stalker guy. How convenient that Christian just happens to be standing outside your workplace. There's no irony here.

64. Seriously, for a movie franchise that makes so much money, they can't fix the trailer music?

65. "Do you think you're the first woman who's tried to save him?" No, but she'll be the first to succeed. Muahahahaha.

66. Is that creepy chick in the kitchen a ghost? She looks dead.

67. This must be a modern twist on A Christmas Carol, where the ghost of Ana's future is like "RUN!"

68. Can someone please tell me if this is a horror movie or not?

69. I wonder how much they had to pay Danny Elfman to do this film score.

70. Couldn't they just pick a different song, though?

71. I do not know how this movie is different from the first one, other than the "darker" color scheme.

72. The good news is that this movie will just reinforce the idea that women are the solution to the tortured minds of possessive, messed up men.

73. Honestly, this makes me miss Twilight, and I am seriously concerned what that means for my mental and emotional health

Emmaline B
The Narrative
35836
https://unsplash.com/photos/O0T1SIgHAfM