6 Reasons Why Taylor Swift Annoys Me

I have bad, bad blood with Taylor Swift. 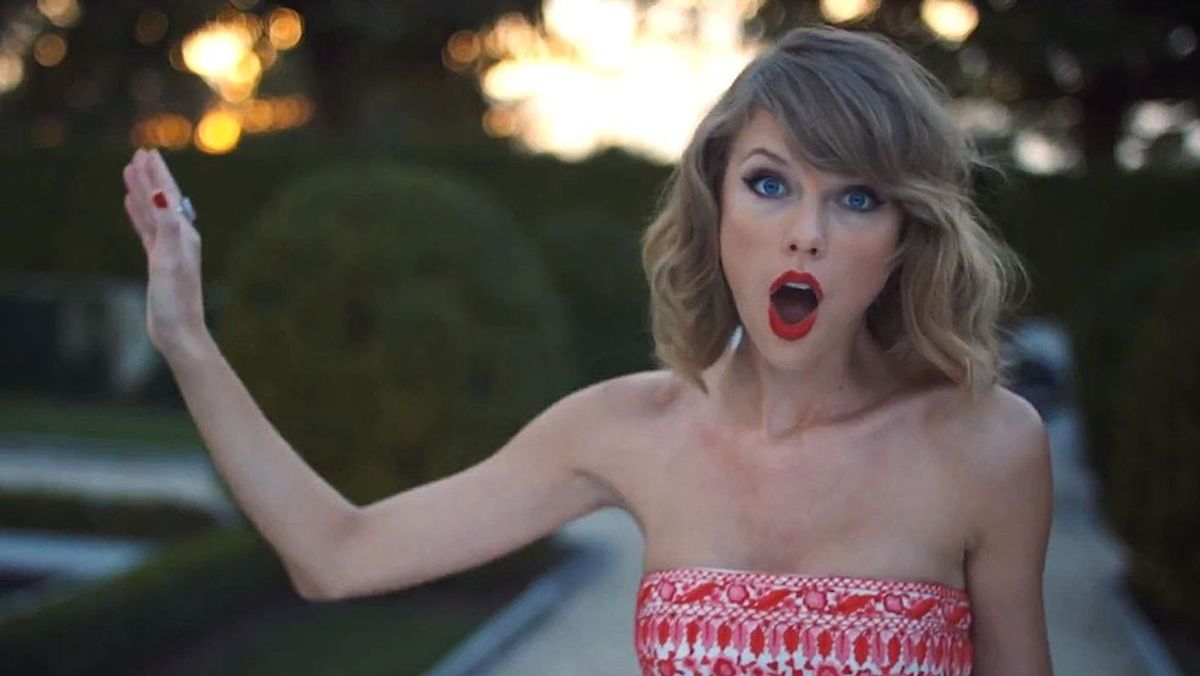 I am not sure what it is, but Taylor Swift just bugs the crap out of me. I think a lot of it has to do with the fact that everyone loves her to the moon and back now. I'm over in the corner having loved this girl since "Tim McGraw" and "Our Song" and totally confused by the new face of T-Swizzle.

However, times have changed. I have different opinions about this songbird, and I think I might have bad blood. HEY.

1. Swift loves being buddies with her fans, but the only times we hear about it are when she films it and posts it online. (Shout to Ryan Murphy for parodying Swift's Gift Giving video on "Scream Queens." My favorite line: "I can't wait to see you in person but before that I'd like to see you post this all over social media to exploit it for my own personal gain." #screamqueens)

2. She has literally no clue what feminism is. First of all, let's define it for her: the advocacy of women's rights on the grounds of political, social, and economic equality to men (straight from Google so you know it's legit now).

When Tina Fey and Amy Poehler poked fun at Swifty for dating guys on guys on guys, Swift was not happy. "You know, Katie Couric is one of my favorite people because she said to me she had heard a quote that she loved that said, ‘There’s a special place in hell for women who don’t help other women,'" Swift told Vanity Fair after the Golden Globes. I am sorry, but feminism is not about helping other women because you're a woman. It is about both sexes being treated equally, a level playing field if you will. If you helped a woman just because she was a woman that would almost be a sexism of sorts.

3. Her dancing is literally painful. The "Shake It Off" video literally was hard to watch. Literally. Next point.

4. You may or may not know that Swift has a squad of sorts. I love the fact that women in the industry can all be friends and can celebrate each other's work. However, most of the girls in this squad are C-List models that are completely unrelatable. I mean seriously, what girl on the planet relates to the Victoria's Secret models? No one. And I blame Swift for this.

5. She's kind of a dating whore. I mean, I would be too if I were famous, so no judgement on that end. My issue is more about her using that as material for lyrics. It's actually comical that even though she took a break from dating to write "1989", the album still is jammed packed with songs about relationships. It is the same kind of music, but everyone is convinced it is different somehow. I see no difference people.

"So it's gonna be forever or it's gonna down in flames." So dramatic over here.

6. I feel like Swift is held on an enormously high pedestal where she can essentially do no harm to anyone. Does anyone remember that one time Swift said, "shut the f**k up," while One Direction was on stage at MTV's Video Music Awards? You might not remember because it got no coverage. No one seemed to care. However, I guarantee if the press or any parents had seen Miley Cyrus do that it would be the most scandalous thing since Janet Jackson's wardrobe malfunction. #doublestandards

Oh, and if any of you are concerned, I am also annoyed that her last album did so well even though I love all the songs, except for "Shake It Off." I hate that song.