5 Struggles Of Group Projects And How To Overcome Them

5 Struggles Of Group Projects And How To Overcome Them

Group projects are the worst, but it's possible to survive them. 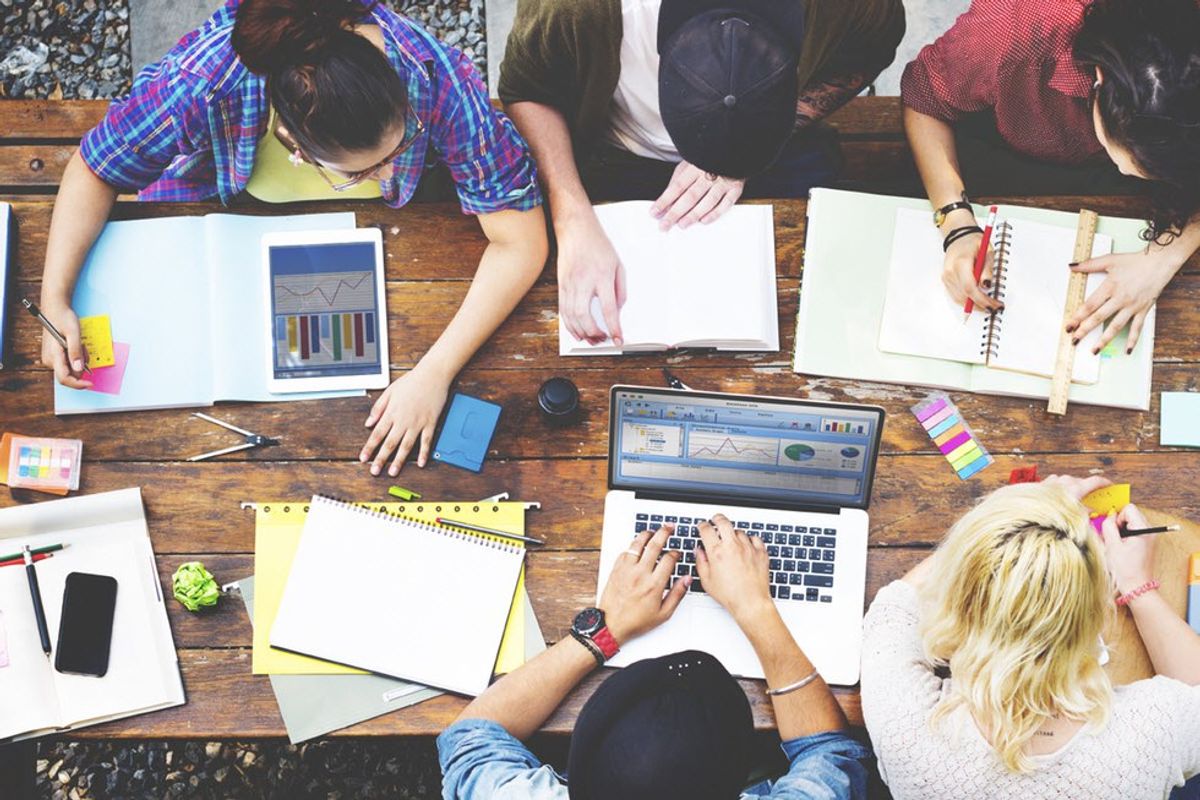 There are two words that, when said by any professor, can almost magically incite a chorus of dreadful groans throughout the classroom: “group project.” It’s pretty much a fact that group projects are the worst, most stressful and frustrating parts of school. However, with the right approach, they don’t have to be completely miserable experiences. Every group project has some of the same frustrating, hair-pulling problems—here’s how to deal with them:

1. Having to work with people you don’t know

Group projects often seem doomed from the get-go when the professor announces he or she is going to pick your group members for you. Usually, you end up being forced to work with people you’ve never met, which starts the project off with awkward silence and lots of twiddling of thumbs.

How to deal: Take charge. The most effective strategy I’ve ever tried in group work is this: if everyone seems to be unsure what to do, pretend you know exactly what you’re doing. If no one else steps up, be the annoying Leader Type of the group—get everyone’s information, message them, throw out some sort of plan. It may be annoying to assume the leader role, but it gets the ball rolling, and then your group mates feel like they can chime in, too, and then look! You’re working together.

2. Having no idea what the professor wants

We all know the struggles of vague directions, and for some reason, group projects tend to have the vaguest of them all. So now, not only are you struggling to figure out how to work with strangers, but you also have no idea where to start or what direction to go in.

How to deal: Ask for help. Most people don’t normally take advantage of this option because asking the professor is an extra step a lot of people may not have time for, they might not know what to ask, or, let’s be honest, it’s a little scary. But most of the time, professors are eager to help those who ask. If you’re earnest in your asking, and they can tell you’re really making an effort to succeed, they’ll most likely be super helpful. Plus, when they see you’re trying, they might even grade your project a little easier.

Though communication is probably the most important part of group work, it’s often the most difficult. Whether you don’t have everyone’s contact information or you just can’t get ahold of people, you end up feeling like the whole thing is hopeless because you can’t even get in touch with the people you’re supposed to be working with.

How to deal: Use a messaging app like GroupMe. This is why it’s so important in the first step to get everyone’s information; however, if you’re missing someone, you can always look them up in your school’s student directory! You could start a regular text group message, but I’ve found that GroupMe suggests more official-ness and responsibility to respond. Start the group on the day the project is assigned, and use it as a sort of headquarters for your project. It helps everyone feel like you’ve all got it together, so it motivates all of you to help out.

4. Figuring out a time to meet

In the case you can get in touch with your group members, there’s still the issue of finding time to meet up. It can feel impossible to find something that works with everyone’s schedules, and even when you think you have, there’s always that one person that ruins the plan because they can’t make it.

How to deal: You’ve got two options: either keep trying or use alternative methods of working together. The first may seem futile, but hear me out. If it’s essential to the project for your group members to meet up, don’t give up suggesting times, and eventually people might give in. Make it known that you’re willing to compromise your schedule a little, and other people will, too. Or, you can try alternative methods such as video chatting or Google Docs. Video chatting could work if the issue is making it onto campus. Google Docs works if all else fails. With this online program, you can create nearly any kind of document, share it with your group mates through email, and then you can all work on it wherever you are, at any time that works for each individual person. And since you’ve got your GroupMe headquarters, you can discuss any changes that have been made or need to be made.

The hardest part of group work, without a doubt, is having to depend on other people. Whether you know your group mates or not, having to depend on other people for your grade can make you feel like ripping your hair out, especially when you get stuck with group mates who refuse to participate, don’t know what they’re doing, or under-deliver. It can make you feel like ignoring them all and doing the whole thing yourself.

How to deal: Delegate. It's not a perfect fix because it'd be easier if everyone could do their fair share, but if some group mates are blatantly Not Helping, the best thing to do is make sure their responsibilities are easy ones, so if they don't come through, you can pick up the slack at the last minute if you have to. And make sure the people who care about their grade get the most important responsibilities. This way, everyone still has their part, but if someone bails, their part can easily be replaced.

Although group projects are more like punishments than learning experiences, there are ways to get past their many obstacles and come out on the other side with a grade you can be proud of. Take charge, don't be afraid to ask for help, stay in contact with your group, be willing to do what it takes to get it done, and be smart about delegation, and you'll have the best project in the class!