5 Prominent Figures In Latin American History
Odyssey
CurrentlySwoonLifestyleHealth & WellnessStudent LifeContent InspirationEntertainmentPolitics and ActivismSportsAdulting
About usAdvertiseTermsPrivacyDMCAContact us
® 2023 ODYSSEY
Welcome back
Sign in to comment to your favorite stories, participate in your community and interact with your friends
or
LOG IN WITH FACEBOOK
No account? Create one
Start writing a post
Politics and Activism

Too many to choose from, but these won't disappoint 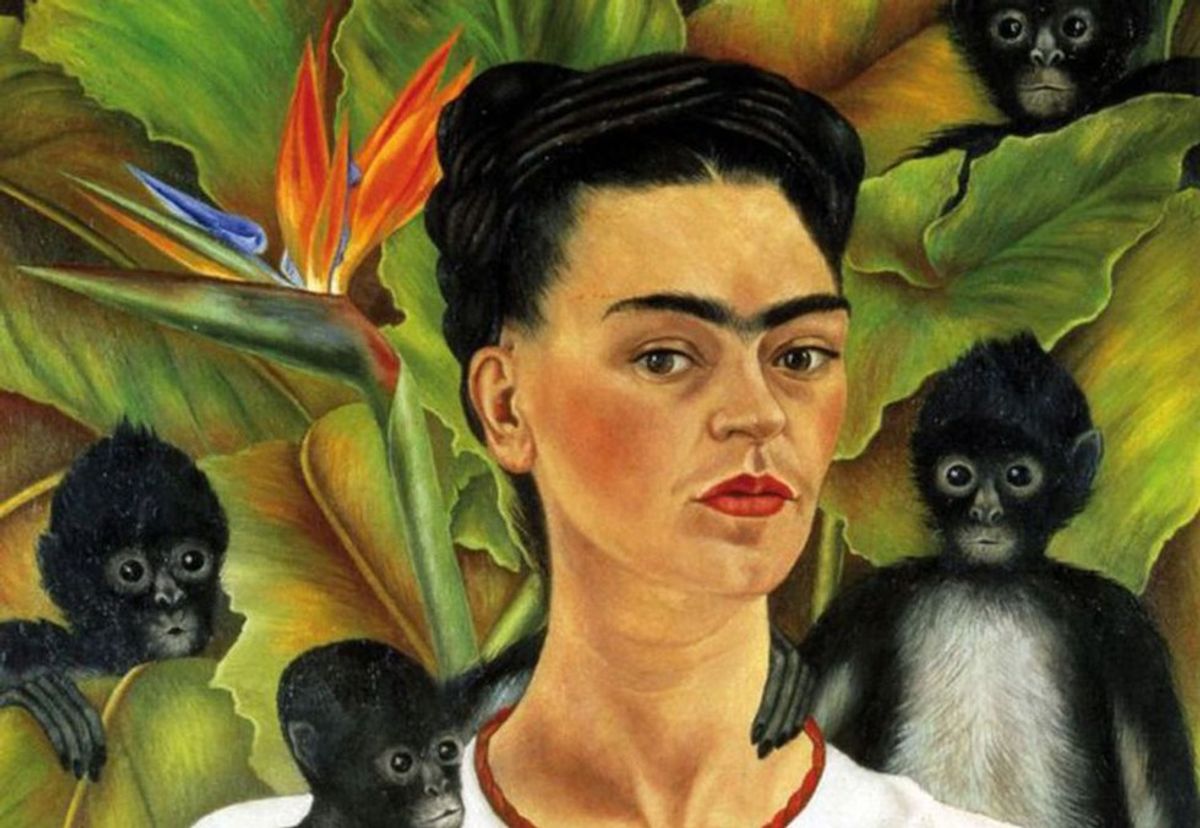 From September 15 to October 15, America celebrates National Hispanic Heritage Month to honor Hispanic Americans and Latin Americans alike for their contributions to their respective cultures and society.

Although the following individuals are not of American descent, I thought it would be noteworthy to mention five Latin men and women who have overcome difficulties and dedicated their lives to a cause that has had an impact in the world.

Whether familiar with her background or not, it’s nearly impossible to not have heard her name. Frida Kahlo was born in Mexico City, Mexico, in July 1907, one of four daughters raised by her mother, a Mexican native, and her father, a German photographer. She is internationally recognized for her self-portraits and captivating paintings, as well as a feminist icon.

Following her husband and fellow artist Diego Rivera, Kahlo spent time in the United States where both she and her husband featured their work. During an exhibition in California, Kahlo displayed her work, Frieda and Diego Rivera, at the San Francisco Society of Women Artists.

Using what was perhaps the worst experience in her life as motivation, Kahlo told the story of her miscarriages through her paintings, incorporating surrealist elements to her work. In 1938, in an exhibition in New York, Kahlo sold various paintings and earned a commission from Clare Booth Luce. The very next year, Kahlo traveled to Paris, where she exhibited some of her best work, and she later met two of the most prominent artists in history, Marcel Duchamp and Pablo Picasso. While there, Kahlo painted one of her most world-renowned paintings, The Two Fridas, what is described to be a portrait of both “loved and unloved” Frida.

It wasn’t until after her death in 1954 that Kahlo began to gain even more international attention. Kahlo’s childhood home, Casa Azul, was opened as a museum in 1958 and she inspired the feminist movement as an icon of female creativity and originality.

That’s right. I didn’t recognize him by that name, either.

Jorge Mario Bergoglio, better known as Pope Francis, was born in Buenos Aires, Argentina, in December 1936, to Italian immigrants. At only 22 years of age, he began his training at the Diocesan Seminary of Villa Devoto and shortly after joined the Society of Jesus. Bergoglio earned his degree in theology in 1970 and later received his doctorate degree in Germany in 1986.

First ordained as a priest in 1969, Bergoglio later served as Jesuit provincial in Argentina. After serving in that position for years, Bergoglio was later ordained as bishop of Auca and Auxiliary in Buenos Aires, until he became archbishop of Buenos Aires in 1998. Just a few years later, Bergoglio was promoted to cardinal by then-Pope John Paul II. It wasn’t until after Pope John Paul’s death that Bergoglio first had the opportunity to become Pope, coming in with the second-most votes behind Pope Benedict XVI, who would later become one of only a few pope’s to step down. Bergoglio was named pope of the Catholic Church in March 2013, making him the 266th pope of the Church.

Apart from being the first Jesuit to be ordained as leader of the Catholic Church, Pope Francis is the first citizen of the Americas and first non-European to be named pope. It isn’t just his country of origin that has made Pope Francis globally-known, but rather his humanitarian actions, humbleness and simplicity that have made his name known and actions admired. Unlike many of the previous popes before him, Pope Francis chose from the beginning of his servitude to lead a more simple life, by living in a two-room apartment as opposed to the luxurious accommodations provided by the Vatican.

His progressive-leaning views have at times surprised Catholic leaders and followers across the world and his generosity and humility have rarely gone unnoticed.

Recognized as Mexico’s richest man, and second in the world, Carlos Slim Helú came from a family of successful Lebanese immigrants who made a name for themselves through hard work and smart business models. Helú was born in January 1940 in Mexico City, Mexico, to an already large family. He attended the National Autonomous University of Mexico, or by its Spanish-language acronym, UNAM, where he majored in civil engineering.

From a young age, Helú was respected as a businessman, as he was involved in multiple industrial, real estate and commercial deals. Helú’s investment company, Grupo Carso, began to make inquisitions of major Mexican companies, including Cigatam, Hoteles Calinda and even Reynolds Aluminio. One of Helú’s greatest companies, TELMEX, is a telecommunications company based out of Mexico City that provides telecommunications products to several countries across Latin America.

Having stepped down from the board of his companies, Helú serves as chairman to several of his businesses and instead focuses his efforts in improving health and education in Mexico and Latin America. Through his high-impact programs and efforts, Helú has managed to help the most vulnerable populations across Central and South America, having benefited more than 29 million people.

Born in Lima, Peru, in August 1942, Isabel Allende is internationally recognized as a Chilean journalist, author, and writer, having written works such as The House of the Sprits and City of the Beasts – just two of her international bestsellers.

Having been left by her father at a young age, Allende, her siblings, and her mother made their way back to Chile to live with Allende’s grandfather. She and her family lived a rough life, due to her mother’s low income and struggle to support several children. Using her past to her advantage, Allende was determined to work hard as a young woman, and eventually became known as a prominent journalist in the 1960s and 1970s.

Following the uprising of General Augusto Pinochet’s brutal government that came after the military coup and overthrow of Allende’s godfather, Salvador Allende, Chile’s first socialist president, Allende became active in aiding those oppressed by General Pinochet. Realizing that it was too dangerous to remain in Chile, Allende and her family fled the country in 1975 in search for a better life in Venezuela.

Allende has published multiple books all of which have acquired national and international recognition, and her work is “equally informed by her feminist convictions, her commitment to social justice, and the harsh political realities that shaped her destiny," according to her website.

Born in January 1959, to a poor Indian family of the Quiche culture in Guatemala, Rigoberta Menchú started to work at a young age in order to help support her family. Although she was young, Menchú became involved in social reform and the women’s rights movement. Due to the presence of guerilla groups, however, Menchú faced opposition and, at times, violent threats. Her family was accused of being part of the guerilla movement at the time, which would eventually lead to the death of her mother and father.

The same year of her family’s death, in 1979, Menchú joined the Committee of the Peasant Union, or CUC, and worked to learn Spanish as well as other Mayan languages in an effort to better communicate with the surrounding communities. Within the following years, Menchú was a prominent part of two demonstrations calling for the better treatment of farmers along the coast. She later joined another movement, the 31st of January Popular Front, where her efforts focused on providing an education for the youth of the native Indian population, conflicting with military oppression.

Following her efforts, Menchú quickly faced opposition and was forced to flee her native country and seek refuge in Mexico. Since then, she has worked tirelessly to ensure better rights for the native Indians and for the better treatment of various ethnic groups. The oppression in Guatemala and mistreatment of citizens in her country inspire her work and her part in various human rights organizations led to the writing of a book detailing her life, I, Rigoberta Menchú.

Her actions and work for the betterment of human rights earned her the Nobel Peace Prize in 1992, and as Menchú put it herself, it was “the struggle for peace, for Human Rights and for the rights of the indigenous people, who, for 500 years, have been split, fragmented, as well as the victims of genocides, repression and discrimination” that led her to it.