The whitewashed history of feminist suffrage is an old, familiar tune. 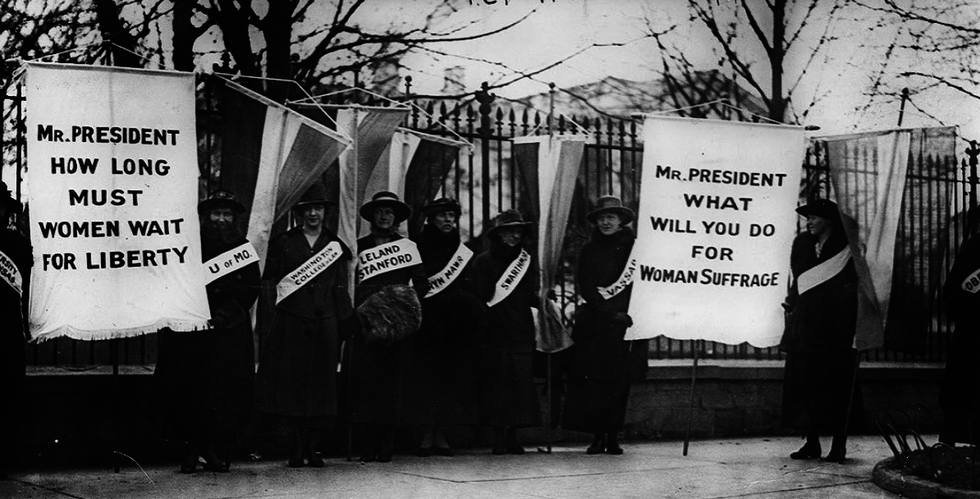 In American society's recent discourse, numerous white women around me have daringly contributed a resounding shrug and (soon-to-be-deleted-because-it-disrupts-the-feed) black square Instagram post to apply their privilege in pursuit of protective equity from police brutality.

Don't worry, I'm not about to hop on a cybernetic soapbox to speak on experiences of discrimination that I've never had to encounter. As a white woman receiving higher education, now is not the time for me to snatch the microphone from a person of color.

Instead, this article is not about Black Lives Matter so much as a study of white feminism masked as performative allyship and the history of intersectionality in the eyes of the law, which is, of course, relevant.

Specifically, let's educate ourselves better than the books with Social Issues 101; I'm using the 101st anniversary of the 19th Amendment to display a few systematic ways in which privilege perpetuates within the stories we tell ourselves about movements.

The whitewashed history of feminist suffrage is an old, familiar tune. Growing up, we learned that the 19th Amendment to the United States Constitution, guaranteeing American women the right to vote, was passed on June 4, 1919. As required by law, at least 36 states had to ratify the amendment for it to be made official. This grueling process took nearly 14 months of protesting and politicking, but the law passed in the nick of time for women to vote in the 1920 election.

Obviously, the 19th Amendment was a critical step forward for our democracy. However, the newfound suffrage law did not concede equal franchisement to all women in the United States. In application, the Amendment ensured the right to vote for white, upper-class women. Women of color, by and large, did not enjoy the same treatment.

For instance, Native American men and women were not even granted considered citizens until 1924, let alone eligible to vote. Furthermore, discriminatory Jim Crow laws in the Southern states manifested through literacy tests and poll taxes that were disproportionately applied to women of color kept black and brown women from fully nationalized suffrage.

It should also be widely learned that the women's suffrage movement eventually decided that intentionally omitting the voices of black people would be the most appealing PR move to advance the 19th Amendment's agenda in the South. What's worse – history's darling suffragist, Susan B. Anthony, considered the 15th Amendment offensive since white women were still barred from voting while black men theoretically could vote. Anthony's strategy in the South featured an argument that white feminism (A.K.A. racism) was a way to maintain white supremacy since white women outnumbered African Americans. Suffragists in Washington, D.C., refused to let black women march alongside them in their parades. The prejudice that women of color faced was two-fold: racist and sexist; schools tend to gloss over this intersection of adversity and intricacy, which excluded black women from the narrative in the past and in the present.

But even as women of color were inordinately denied the democratic process, African American, Native American, and Latinx activists fought for the responsibility to vote. In fact, there were several lesser-known female suffragists of color such as Mary Church Terrell (an advocate and one of the first black women to earn a university degree), Frances Ellen Watkins Harper (an activist writer who published her first poetry book at only 20 years old), Sarah Parker Remond (a lecturer, abolitionist, and agent of the American Anti-Slavery Society), and countless more prolific minds that you can read about here.

Time and time again over the nation's failures in finding itself as an electoral democracy, the freedom of protest has provided an essential voice for minority groups. Those in power may try to discount dissent, but if there is significant and lasting momentum, then the conversation of change finally begins. Such was the case 101 years ago as it is in 2020.

The responsibility to pass on the nuanced and complete story of a movement lies with historians and those with a platform of privilege, like myself. Over a century later, Americans are only starting to reckon in earnest with the complexities of the suffrage movement's victory.

Many of the white women who are thought of as its heroines declined the prospect of fighting for the black women in the cause. Many of the black suffragists faced multiple systems of oppression and died without acclaim. The revolutionary philosophy of progress in a republic allows us to recognize the issues of the past and construct a more inclusive future. One thing is for certain: there is real work to be done in history as it happens today, how will you help beyond image?