15 Sure Ways To Lose Your Boyfriend (As Told By BFFs)

If you’re ever trying to get out of a relationship, try one of these and you’ll put the 'I' in single. 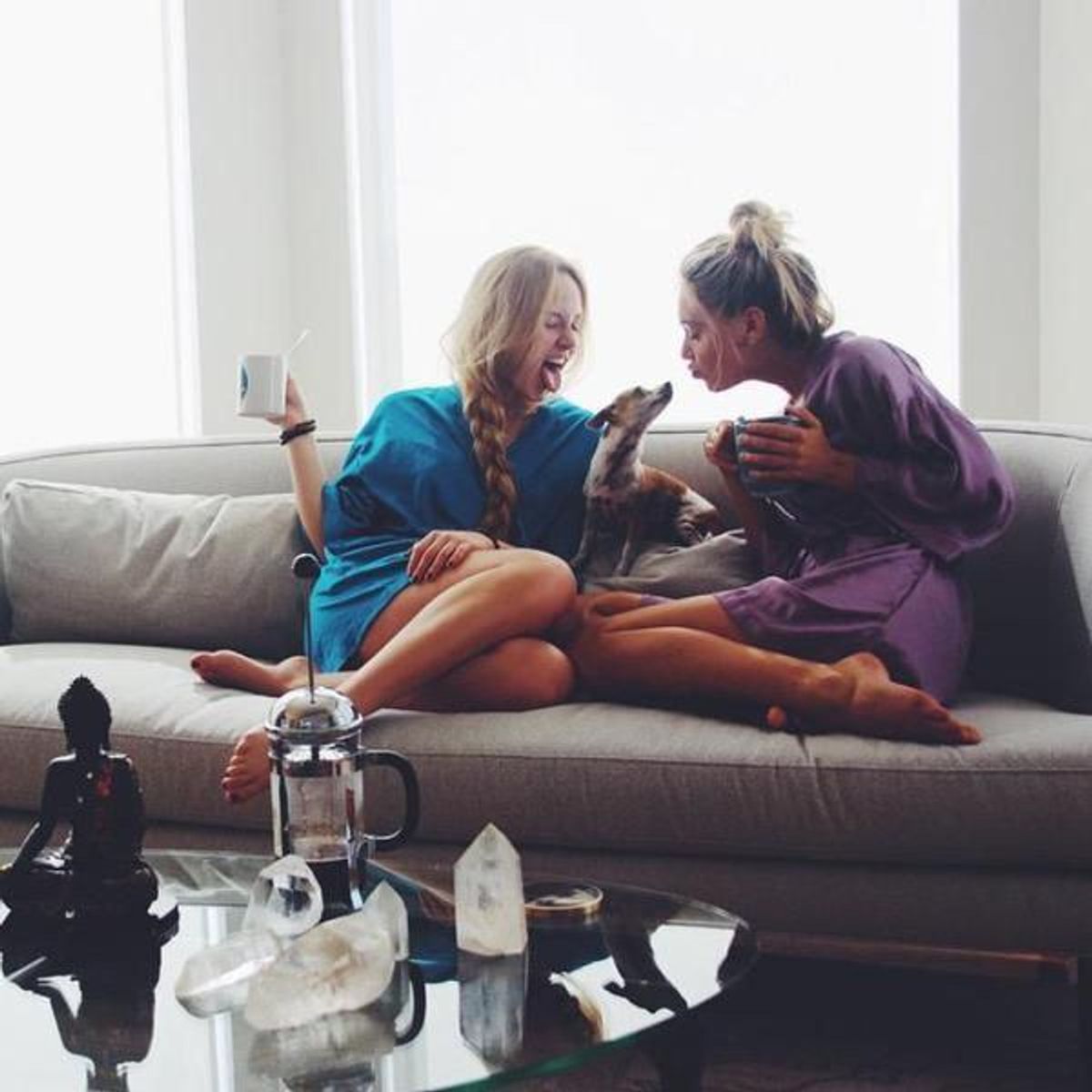 The other day my best friend and I were sitting on our kitchen floor laughing hysterically, having a whipped cream fight and taking shots of tequila, while our fairly new boyfriends were sitting on our living room couch watching football. We looked at each other and said, "Why are they still with us? We're crazy." Then we started thinking about our friendship and realized that together we have probably done some of the most absurd things anyone has ever heard of, and our boyfriends, god help them, deal with us. So here's a bunch of things that we've done that made us wonder why the hell they stay with us.

1. Act like total lesbians. Move in together, kiss, touch each other's butt, get matching tattoos... the whole shabang.

2. Ask your boyfriends to come over and then spend 45 minutes talking about them in the bathroom together.

3. Play vagina hockey on the kitchen floor while drinking tequila. (Vagina hockey is a newly thought of sport where you sit on the floor with your legs spread wide open and roll a can of dog food at each other's vaginas, there are no rules or winners.)

4. Fight each other in the kitchen with whipped cream and ranch... enough said.

5. Spend all of your money on clothes and shoes and never have even a dime left to spend on activities with your boyfriend.

5. DRINK constantly. "A drink a day keeps the therapist away." I don't know who said this but it's our life motto.

6. NEVER HAVE groceries in your house. Your boyfriend's hungry? Oh well, they can fend for themselves, we had week old pizza and wine for dinner.

7. Either don't shower at all or shower five times a day. This will either annoy them because you smell or because you take too many showers.

8. SNYC YOUR PERIODS. We have the same cycle, so you know if you have one bitch you're always gonna have two.

9. Be literally stuck to each other's hips. Your boyfriend will know that if he's dating you he's also dating your best friend and is expected to treat her like a queen, too.

10. Eat more than they do. I think one time we actually ate two entire large pizzas, a thing of wings and a tub of ice cream by ourselves in two hours. Maybe mozz sticks too.

11. Text each other constantly. No matter what you’re doing (during sex, nice dates, middle of arguments, etc.)

12. Call out of work to hangout with each other at least once a week.

13. Act like complete slobs during dinner at a nice restaurant. Order two appetizers and eat all of the free bread. Then, BURPING CONTEST.

14. Dress like a combination of a hobo and a dude. Leggings, no bra, oversized sweatshirts and the occasional scarf-over-head for those really cold winter days. Who needs a hat?

15. Listen to gangster rap music really loud and dance like idiots until you fall to the ground laughing and pee your pants.

Obviously, some of these things are absolutely ridiculous and yes, we actually did them. No, we have no idea how it’s possible that our guys still continue to put up with all of this, but hey, if you’re ever trying to get out of a relationship, try one of these and you’ll put the 'I' in single.