12 Things You May Not Have Known About Michael J. Fox
Odyssey

12 Things You May Not Have Known About Michael J. Fox

Parkinson's, incurable optimism and other fun facts about the beloved author, activist, and -- of course -- actor. 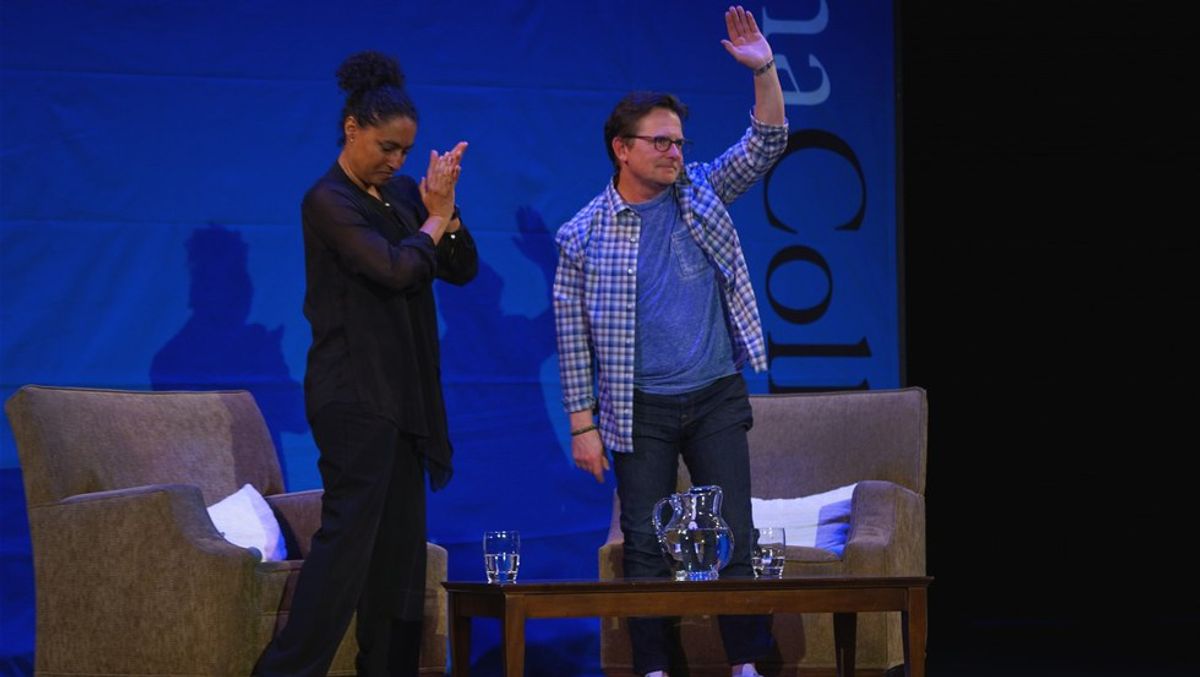 This past Friday, Michael J Fox came to Pomona College to speak in a moderated discussion with Professor Nicole Weekes.

Chances are you recognize the famous actor, whether it be as Marty McFly, Mike Flaherty, or any of his many roles. But he wasn't here to speak about those -- although of course they did come up, particularly when one Pomona student accidentally referred to him as "Marty" rather than Michael. Instead, his main intent was to speak about his life as an activist and author about Parkinson's Disease. If this is news to you, here are some other things you may not have known about Michael J Fox:

1. He was diagnosed with Parkinson's in 1991 and went public with it in 1998, when he semi-retired to focus on Parkinson's research.

But he didn't fully retire. He's still at it! Which is even more impressive when you look at Hollywood's dismal track record for diversity and representing people living with any sort of disabilities. Even when a character does have a disability, an able-bodied actor is often casted to play the role. There's a chance that if he had had Parkinson's before he became a known actor, he might have been overlooked in favor of another actor who did not have Parkinson's.

2. His charity The Michael J. Fox Foundation for Parkinson's Research has raised over $450 million.

The above picture is interactive on the site linked above for more information on how the money they have raised is being used. Some of their more controversial work which has invoked opposition from various politicians involves using embryonic stem cells as they are attempting to see if there may be a genetic marker for Parkinson's. As over one million people in the United States have Parkinson's disease, Michael J. Fox is truly making an impact on the world by supporting research to help others like himself find the treatment they need and research new forms of treatment.

3. He's married to actress Tracy Pollan who was his character's girlfriend on the show Family Ties.

It's so rewarding when an OTP from a TV show became a true pairing in real life! At the discussion at Pomona College, he described her as "funny, sexy and patient."

4. There's also a Michael Fox out there.

No, this is definitely not Michael J. Fox! But this guy is the reason why Michael J. Fox had to put the J in his name. Ah, well, it is catchy! Although his middle name is actually Andrew...

Michael J. Fox that is, not Michael Fox. And he's actually written several well-received books! About his life, Parkinson's, his optimism. And speaking about his optimism...

6. He considers himself an "incurable optimist".

So much so it's in the title of one of his books! He also brought this up at the discussion, saying he thinks some people are just born that way. He received a Grammy for "Best Spoken Word Album."

7. He uses drugs and underwent a thalamotomy to help him control the effects of the disease.

While he may be an incurable optimist, he is of course quite aware of how his disease affects his daily life and can often get in the way. During the discussion, he even joked about it, saying he couldn't play the role of a man picking up a glass of water to drink without spilling it. The thalamotomy he underwent is a brain surgery which destroys a tiny portion of brain tissue in hopes that it may help control tremors and involuntary movements. Doctors are also looking at it as a possible treatment for depression and other conditions, so Michael J. Fox may be having an impact in other areas in medicine as well.

8. But he doesn't always use medication!

In particular, he made a very "deliberate choice" to not use medication when appearing before the Senate Appropriations Subcommittee in September of 1999. He wanted the effects of the disease to be clear as he was giving testimony about them. He says the "transformation must have been startling."

9. He is a "cautionary tale gone wrong."

His words he used at the discussion to describe his early career choices. At 18, he decided to move to Los Angeles to become an actor. But hey, look how it turned out! Maybe instead of a "cautionary tale gone wrong," he's more of a message that "taking ridiculous risks to follow your dreams may just pay off in the end."

10. He might have not gone to college, but he has several degrees!

Okay, technically they are honorary doctorates. Two from British Columbia (oh yeah, he's Canadian), one from NYU, and one from Karolinska Institutet in Sweden.

Well, in real life he's the good guy. But that doesn't mean he can't play a shrewd, sometimes manipulative lawyer! His Parkinson's even becomes a part of his crafty characterization as the character Louis Canning uses it to gain sympathy with the court. What happened to the goodhearted, sometimes a bit goofy Marty McFly?

12. He has been recognized many times for his scientific and philanthropic contributions.

Unlike his conniving character in "The Good Wife", Michael J. Fox is definitely one of the good guys in real life and has been recognized for it. Above is the photograph taken in 2007 for when he was one of Time's 100 for "his work, his kindness, his humor under duress, and for a noble heart."

Do you want more Michael J. Fox? According to Pomona College's website, they will be posting the video of his event some time this week, so keep an eye out! It was a great discussion, definitely worth the time to watch.