12 Must-Watch Bro-Comedies Of The 2000s
Odyssey 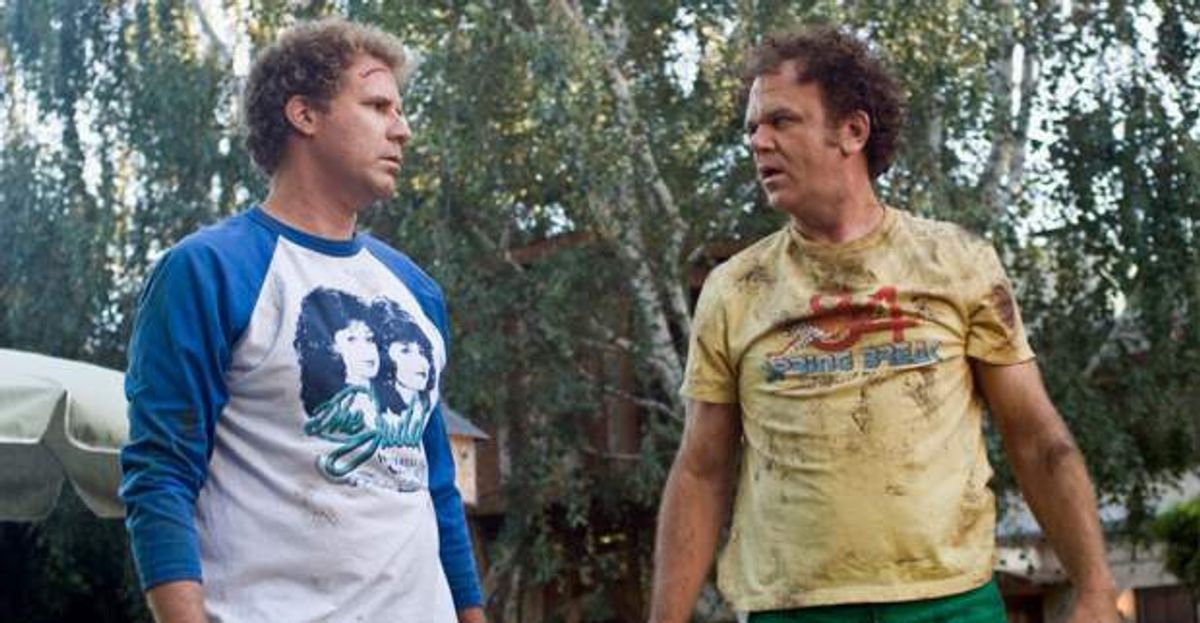 Movies are awesome. Bros are awesome and like awesome things. For every chick flick a guy has to endure, he must watch something equally as awesome to make up for it. Here are 15 out-of-order hilarious movies that have everything from bro-mances to what it really means to be a dude.

This movie is the definition of a bro-mance. Paul Rudd shines as a newly engaged dude who realizes that he has spent so much time with his girlfriend that he does not know if he has a close enough friend to be his best man, so he searches for one. What is more awesome than a dude looking for another dude that likes the same kind of awesome things? There is nothing like covering 1980s "Rush" songs in your garage with the guys. Plus, through this bro-lationship we were given new nicknames to call our bros such as "bro-montana."

"The Hangover" is the perfect party movie. Four guys go to Las Vegas to celebrate for a bachelor party and have the night of their lives. Three of them wake up and have no idea what happened the night before and also realize that one of their friends is missing. Fighting to relive their epic night, the three best friends that anybody could have prove that what happens in Vegas stays in Vegas.

Two guys in their 30s living with their parents. Zero responsibility. Everything changes when their parents get married and they become step-brothers. This film taught us that Shark Week is important, never touch another man's drum set, and that "Cops" does not come on until four. "Step Brothers" truly shows how any dudes can come together and have the "Did we just become best friends?" moment.

Jonah Hill and Michael Cera make the perfect big dude and skinny guy combo in this film about two high school seniors trying to plan a huge party before they graduate. This movie has you laughing from start to finish and wishing you could change your name to Mclovin'.

"The Hangover" before the hangover, "Dude, Where's My Car?" is the epitome of the party-too-hard movie. On the premise of a long night of too much fun, Ashton Kutcher and Sean Williams Scott spend their time trying to figure out where they parked the car. This movie had us all wanting "Dude" and "Sweet" tats on our backs.

"Pineapple Express" is the definition of a stoner movie. Seth Rogen and James Franco are the modern-day Cheech and Chong in this drop-dead hilarious movie about two potheads running away from some dudes who want to kill them for witnessing a murder. James Franco made us believe that all drug dealers are super cool and fun to hang out with.

You cannot make a list of funny movies for the bros without mentioning at least two Will Ferrell movies. "Talladega Nights" was the movie that made people actually take interest in NASCAR. From beating the French to praying to baby Jesus, this movie is as American as it gets. Ricky Bobby showed us if you ain't first, you're last and that everybody needs a bro to help them slingshot to victory. Shake-n-bake for life, Ricky.

Will Ferrell shows the world how to broadcast the news in "Anchorman." From stylish hair to being better than women, Ron Burgundy stands for what all bros love. Not to mention his stellar news team. Ron taught us that with great hair and smooth talking, any man could get what he wants. "Anchorman" is the movie to watch if you want ridiculously violent fights with tridents and pitchforks between multiple groups of people. Stay Classy, San Diego.

"Old School" throws Luke Wilson, Will Ferrell, and Vince Vaughn back into the glory days by opening up a frat house by their old school. This is the movie that makes everyone believe that even when you get older, you can still keep up with everyone else.

Andy Sandberg shows he can do more than be on a boat in this film. Sandberg had us all believing that we could be a stuntman and that we could win over the girl of our dreams. All it takes is jumping over 15 buses. Andy has us rolling the whole time with dumb humor and awkward encounters.

Paul Rudd and Sean Williams Scott are energy drink salesmen turned big-brothers in this movie about how even when you do not get along at first, if you really try to be a friend to a dude it can work out. This movie had us wishing we all had big bros like Paul and Sean.

What's one thing all bros want to do? Go on an adventure to find real buried treasure. In "Without a Paddle," three dudes live their childhood fantasy in order to pay respects to their friend and discover that although a lot of money is awesome, being friends is way better.