From brothers to bandmates and so much more. 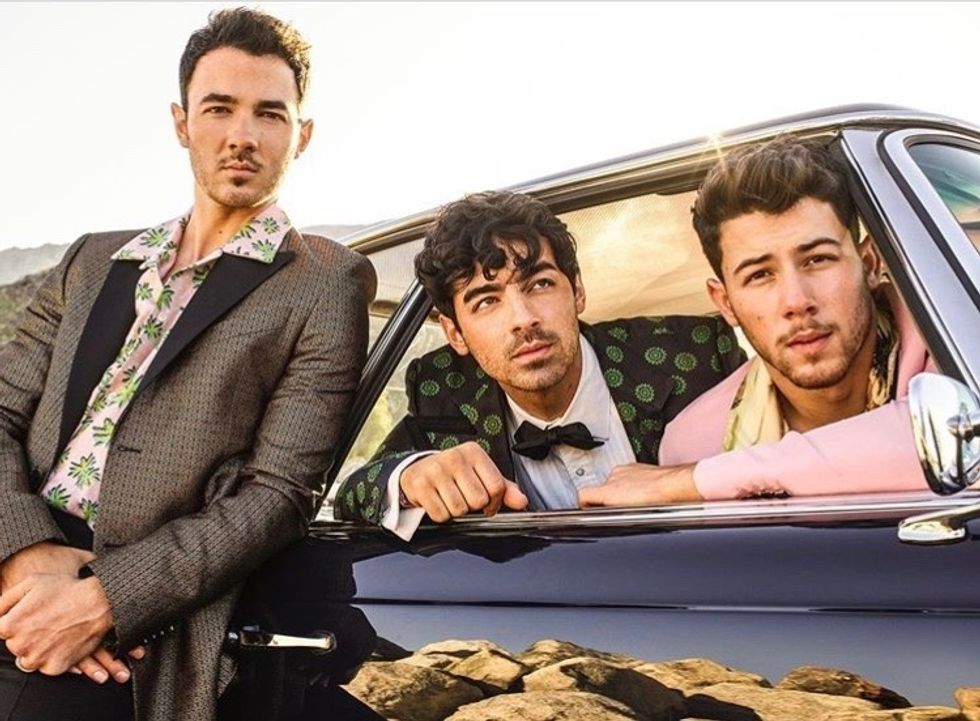 The Jonas Brothers' documentary was released on Amazon Prime on Tuesday, June 4th. The movie focused on the band's success that was basically created overnight from the years 2009 to 2013. They had a bad breakup and decided to rebuild their relationships with each other by traveling the world together.

Thank God this happened because it resulted in a Jonas Brothers reunion, one of which will go down in history. But the documentary revealed a lot of moments that Jonas Brothers fans never saw coming.

1. Nick was the one who broke up the band.

After a lot of tension that built up over the years, Nick was the one to speak up first. He felt that he wasn't doing his best creatively and that his brothers didn't want to be there. When he told his brothers he didn't want to do this anymore, and wanted to go on and do things on his own, Kevin and Joe were completely blindsided.

Before breaking up for good, the Jonas Brothers took a small break from music. In this time span, Kevin got married and Nick was off doing his own thing. Joe took a stab at writing his own music and released an EP, but it didn't do as well as he hoped. He revealed that he felt like a failure and was embarrassed because he felt he could only be successful if he was making music with his brothers.

3. Kevin deserved better back then, and he still deserves better now.

There were still a few radio gigs the Jonas Brothers had agreed to play after they broke up. Nick and Joe told Kevin he didn't need to go because they were each going to play their solo music and no Jonas Brothers songs. Unfortunately, this was a lie, and the entire set was a JoBro performance.

Kevin revealed it was one of the lowest points in his life. He never felt like he belonged anywhere, and the band was his safe haven. Even today, he still gets asked if he's Nick or Joe. Kevin deserves more appreciation, especially because he's just as talented as his brothers and a family man.

4. The Jonas Brothers were dropped by their first label.

Nick, Joe, and Kevin wrote their first album "It's About Time" with Sony records. The label dropped them due to low ratings, and their family was out of a source of income. When they were at an all-time low, Disney called and gave them a record deal along with a sitcom.

The boys blew up rather quickly after signing with Disney, and I bet Sony had some major regrets about letting them go.

The Jonas Brothers appeared on an episode of "Hannah Montana," and Kevin said meeting Miley changed girls for Nick forever.

"When we met Miley, I think that kid's head exploded," he said.

When he dated Miley, Nick began writing about love, but this time, he actually knew what it felt like. "Lovebug" was born and the rest was history. How adorable is that?

6. Joe and Nick predicted Danielle would be Kevin's wife.

In some adorable footage in the doc, Kevin is on the phone with Danielle and invites her to their show. Joe and Nick are in the background telling him things to say to her. After he finishes his conversation, he turns to his brothers and tells them to never talk to him when he's on the phone again.

"He's mad because that's his wife," said Nick. They knew then that these two would be in it for the long haul.

7. Their parents lost everything when they chose to support their band.

The Jonas Brothers' dad was a pastor at their church and their family was expected to do a lot surrounding their religion. Because they weren't a Christian boy band, their family received backlash and their father was forced to resign from the church. They lost their home and social life.

They moved into a two-bedroom house in Little Falls, NJ, where all four Jonas boys shared a room. Thankfully, Disney came in and saved the day when they really needed something to help them along.

After years of not speaking or seeing each other, the boys put questions in a bowl and everyone had to drink when answering them. The questions asked were intense and the answers got pretty harsh.

Joe blatantly told Kevin that he was holding the others back, and Nick said they should have never filmed "Jonas" season two. Although the game was cutthroat, the boys said it allowed them to clear the past so they could move on to their future.

People working around Nick began noticing a change in his appearance and behavior when the band first started out. He was drinking a ton of soda, constantly going to the bathroom, and became so thin you could see his bones.

When they took him to the doctor, the pediatrician told them to immediately go to the hospital, and thankfully, Nick was able to be treated. Since then, he has become a huge advocate for finding a cure to Type 1 Diabetes.

10. Falling in love allowed the brothers to change for the better.

Joe revealed that falling in love with Sophie Turner made him a better person and ultimately a better brother. Nick said the love that he found has changed his life forever, and their time apart from each other was necessary for them to grow.

11. Joe was originally offered a role in "Camp Rock" by himself.

After hearing that Joe got the role of Shane Gray in "Camp Rock," their father called the Disney Channel exec and suggested that the whole band got cast. The boys felt at that point in their careers that they needed to do things together.

"Kevin and I were barely in it, but it was still so exciting to make a movie and be on TV," said Nick. When filming the movie in Toronto, the Jonas Brothers were blowing up in America, but they had no idea until they returned to the US.

12. The Jonas Brothers are back and better than ever.

Nick said it best. "In order to move forward, we had to revisit our past." The Jonas Brothers didn't end on a good note when they broke up, but they finally worked through their issues, and their relationships are stronger than ever.

This Jonas Brothers reunion may be the best thing to ever happen in the 21st century. You can quote me on that.

You can watch the Jonas Brothers' documentary titled "Chasing Happiness" on Amazon Prime.