10 Oatmeal Recipes That Are Perfect For Autumn
Odyssey
CurrentlySwoonLifestyleHealth & WellnessStudent LifeContent InspirationEntertainmentPolitics and ActivismSportsAdulting
About usAdvertiseTermsPrivacyDMCAContact us
® 2023 ODYSSEY
Welcome back
Sign in to comment to your favorite stories, participate in your community and interact with your friends
or
LOG IN WITH FACEBOOK
No account? Create one
Start writing a post
Lifestyle

10 Oatmeal Recipes That Are Perfect For Autumn

You have a new reason to love your favorite season. 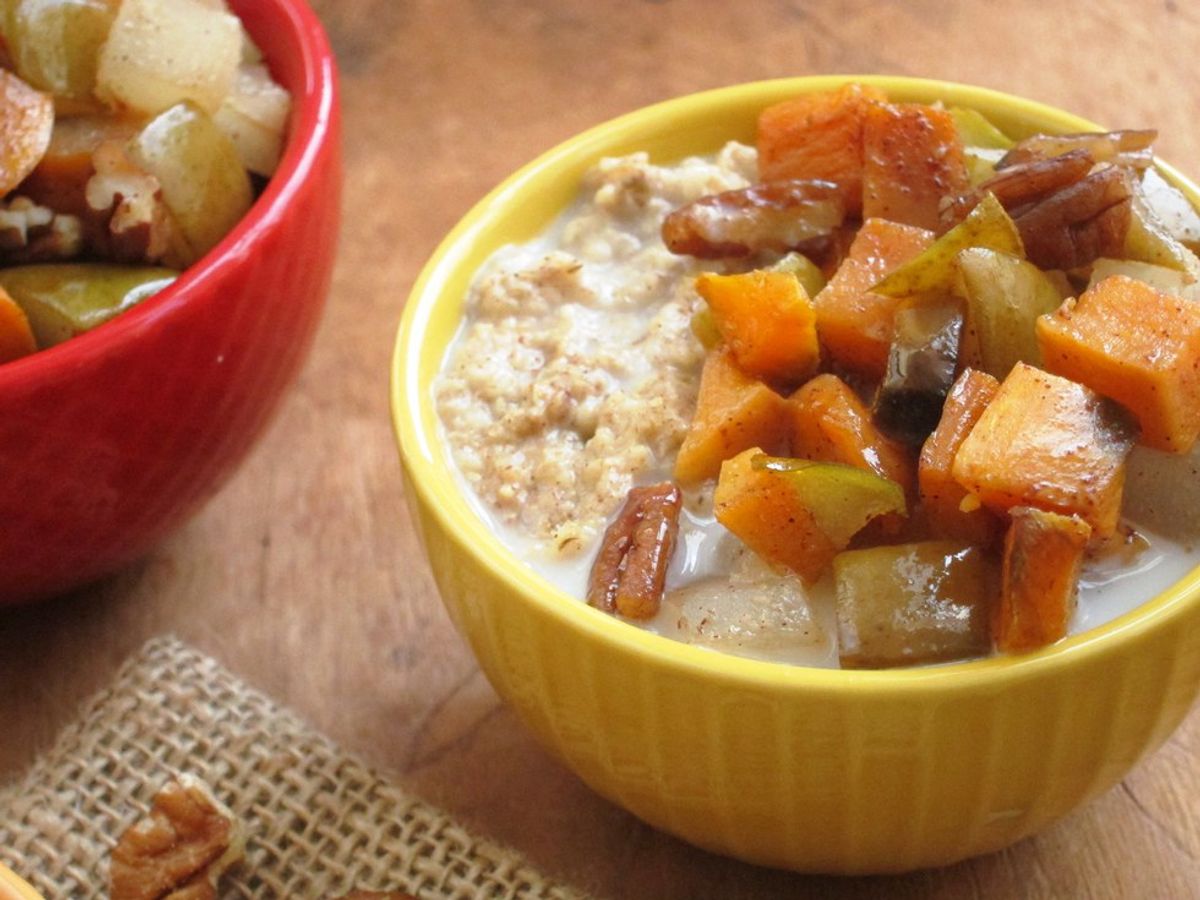 By now, we've all had at least thirteen different friends post on social media about how much they love autumn. Personally, my favorite season is spring, but I have a special place in my heart for autumn as well. Most people cite the pumpkin spiced drinks and sweaters and beautiful colors, but I like autumn for another reason: it's the time of year when everyone else finally joins me in my love of oatmeal.

I eat oatmeal 365 days a year. I will sweat over a stove when it's 90 degrees in August and eat my hot porridge in front of a fan because my love for oats has no exceptions. However, in autumn, my oatmeal habits are more socially acceptable, and the world joins me in my morning ritual.

The best part about eating oatmeal year round is experimenting with seasonal produce and flavors. Many of my best oatmeal recipes tend to come out in these autumn months, because what could possibly go better in oatmeal than the fall flavors of creamy pumpkins, sweet apples, juicy pears, and a loving drizzle of maple syrup?

Oddly enough, this recipe was inspired by an all-vegan Passover dinner I attended (how Brooklyn is that?). My favorite part of this experience was tasting all the veganized dishes that might traditionally appear on a Passover table, such as the matzo ball soup, jackfruit brisket, and flourless cake. What immediately won me over, however, was the tzimmes, which is essentially a sweet "stew" of root vegetables and dried fruits. This recipe was heavily inspired by that dish.

One of the most popular recipes on my blog is--unsurprisingly--my pumpkin pie porridges. I have baked, overnight, and stovetop variations, but this steel-cut version is my favorite. It's hearty, think, and flavorful, and it makes enough to nourish you every morning for a week.

Who said vegans can't enjoy the great combo of bacon and figs? Fear not, this oatmeal uses tempeh bacon (or whatever your preferred veggie bacon is). This recipe is a great treat during the short fig season, which generally ends around October or November.

Muesli is becoming more popular in America, but I originally experienced it in Ireland. It's kind of like granola, but the oats are left raw or just a little toasted, so they aren't crunchy. While "raw granola" doesn't necessarily sound that appealing, it is weirdly delicious, and much healthier, since granola is typically coated with oil and sugar. This autumn-themed muesli incorporates dried fruits, pepitas, pecans, and the game-changing ingredient: a pinch of cinnamon.

Every root vegetable goes great with cinnamon and maple syrup, but I wanted to try something different. It turns out that fresh orange juice really enhances the flavors of sweet potato without adding other sweeteners. This bright and sunny recipe proves that cinnamon isn't the only way to eat your oats in the fall.

One of the easiest ways to elevate your porridge experience is to try a salted version. The sweetness of the apples and maple syrup works so well with a pinch of coarse salt in this fabulous recipe.

You know when your breakfast sausage links (or bacon) soaks up a bit of the maple syrup that has escaped from the craters of your waffle? This recipe is a celebration of that magical phenomenon.

If you've had enough "pumpkin spice" and are ready for something a little different, this masala chai-spiced porridge might be perfect. It has the same cozy, intriguing effect as your pumpkin spice latte, but with a different (but equally fantastic) spice blend.

If you want to satisfy a chocolate craving, this spicy oatmeal is a great way to do it during colder months. Mexican hot chocolate incorporates cinnamon and sometimes cayenne (if you want the heat), adding great depth in flavor. Bonus: because the cocoa powder and spices add so much flavor, you can actually sneak a mashed banana into this porridge for extra nutrition, sweetness, and volume, and you won't even taste it!

Finally, this apple pie-inspired recipe is an obvious choice for oatmeal. Thanks to this sweet, satisfying, and simple recipe, you don't have to wait until Thanksgiving or 4th of July for a slice of your favorite All-American pie.
Report this Content
This article has not been reviewed by Odyssey HQ and solely reflects the ideas and opinions of the creator.