What Not To Do When Writing An Article For Odyssey

What Not To Do When Writing An Article For Odyssey

A reference to Spongebob Squarepants. 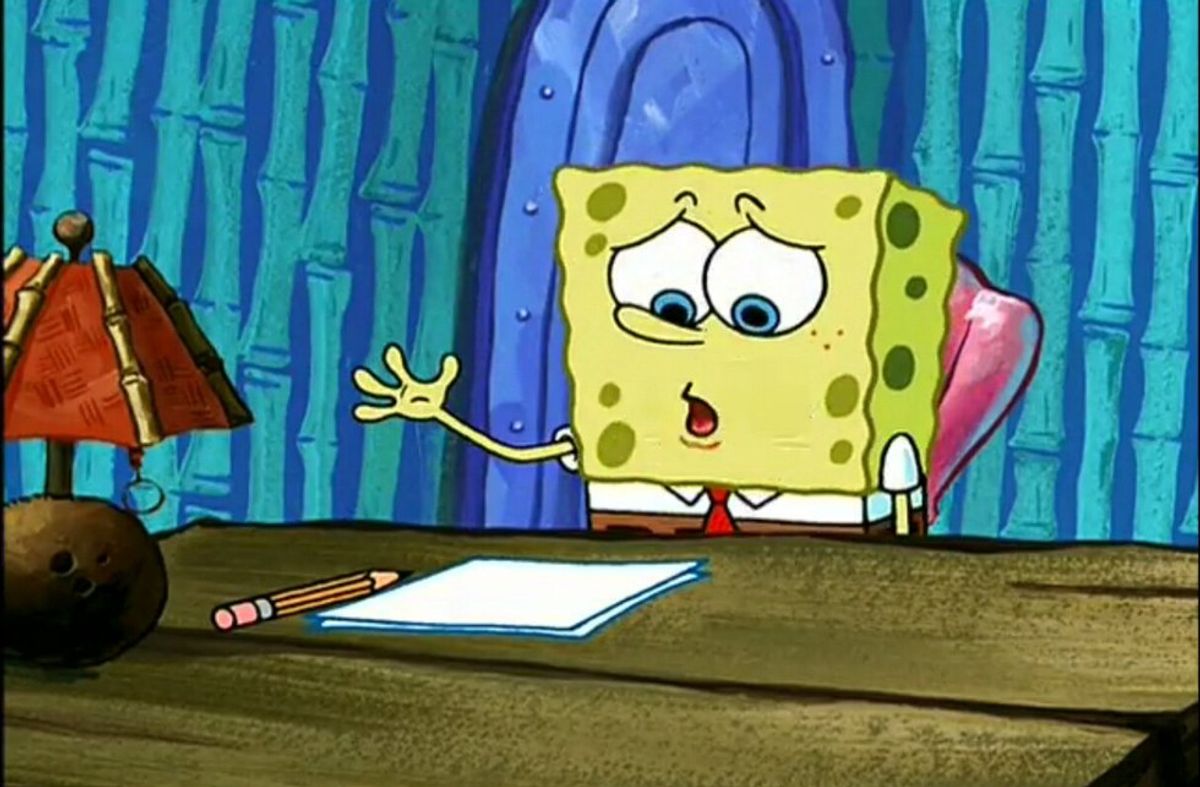 Have you ever seen the episode of "Spongebob Squarepants" when he's trying to write an essay and he just can't? So he starts doing all these things to procrastinate writing his essay? But it actually works out in the end because he uses it as his essay content? Yeah, well that's what this article is going to be about. As I struggle a writing block almost every single week, I try to do things that put off my article until the last minute. Those reasons as follows:

Never, ever, go on social media when you're trying to do something because then you just get lost and two minutes turns into twenty and you're completely lost and still don't know what to write about. You obviously can't write about Jenny's new purse or Zach's new car. So just stay off.

When I lay in bed, my body knows automatically that it's sleepy time. Either it's taking a nap, or it's going to bed. This is why I can't do homework in bed, watch Netflix in bed, or write articles in bed. It's just not a good idea unless I want drool on my computer...

Oh this one is bad, bad, bad. I can't watch Netflix because one episode turns into two, two episodes will turn into three, and three episodes turns into finishing out the season. You then realize that it's two in the morning and your work still isn't done.

Some people like to say that their greatest ideas come to them in the shower, but mine automatically disappear as soon as I get out. It's as if once the curtain is opened, the ideas fly out of captivity. It's sad, but absolutely true. Why don't we keep notepads in there?

Don't eat food around a laptop, ever. Bad things will happen, I guarantee it. You'll be eating a snack and then BAM! Just like that your drink and chips are all over the desk and computer... and we all know we don't want that. Cleaning it up or being out of a computer.

Now, this would be beneficial if drives weren't used to clear your head even more. Sure, I'm already out of ideas so let's just take them all out. Sometimes you may just want to keep going and never return to the tasks you need to be doing.

This would be cool if they'd help you pick a topic. Usually, they all suggest ones that you'd never write about in your entire life. Inappropriate ones, stupid ones, controversial ones. I appreciate the help guys, but I do have some boundaries and limitations...

Please, for the love of all things good and holy, never watch sports when trying to write an article. If you're anything like me, you're going to type what you're saying and soon before you know it, you'll have "GOD DAMMIT! CATCH THE DAMN BALL" written somewhere in your article.


There's many more things that aren't beneficial to writing an article, but I guess watching Spongebob paid off since he just helped me write this one. Thanks Mr. Squarepants!