Would You Rather Questions to Make Conversation (1/1)
Odyssey
CurrentlySwoonLifestyleHealth & WellnessStudent LifeContent InspirationEntertainmentPolitics and ActivismSportsAdulting
About usAdvertiseTermsPrivacyDMCAContact us
® 2023 ODYSSEY
Welcome back
Sign in to comment to your favorite stories, participate in your community and interact with your friends
or
LOG IN WITH FACEBOOK
No account? Create one
Start writing a post
Student Life

Would You Rather Questions to Make Conversation (1/1)

Get ready to deliberate 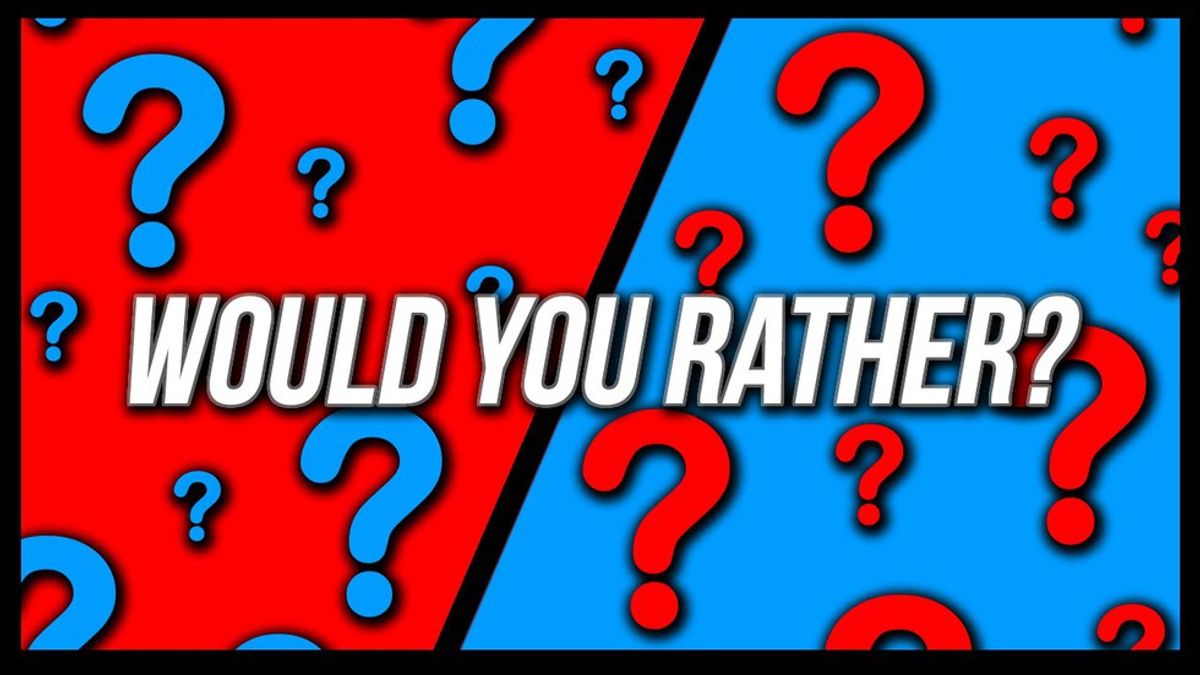 We've probably all played Would You Rather at some point. The next time you break out this party game, here are some options to get you started.

1. Would you rather stay in college for ten years if you were guaranteed a great job offer when you left, or graduate on schedule but take your chances on employment?

2. Would you rather marry a career politician or a career marine?

3. Would you rather get a check for a millions dollars right now, or get the same amount of money in increments over the next twenty years?

4. Would you rather be a famous artist or an Olympic athlete?

5. Would you rather have an unlimited supply of your favorite food or unlimited free downloads on iTunes?

6. Would you rather have free plane tickets or free concert tickets for life?

8. Would you rather be able to breathe underwater or see in the dark?

9. Would you rather have permanent Cheeto hands or a permanent milk mustache?

12. Would you rather be an expert computer hacker or a master at parkour?

15. Would you rather have a full sleeve tattoo or a nose ring?

16. Would you rather be President or First Lady/Man?

17. Would you rather have an unlimited amount of money to spend on clothes or gadgets?

18. Would you rather have free college tuition or free rent for four years after you graduate?

19. Would you rather have to listen to the same album on loop for a year or watch the same movie every week for a year?

20. Would you rather give up internet access or cars for a year?

21. Would you rather always show up on time but look like you rolled out of bed, or always look put together but show up late to everything?

And finally, the one that a group of friends and I have gotten into numerous debates over and have yet to figure out...

24. Would you rather not be able to tell the difference between a baby and a muffin, or change genders every time you sneeze?