Words Stay With You, Especially The Lies
Odyssey
CurrentlySwoonLifestyleHealth & WellnessStudent LifeContent InspirationEntertainmentPolitics and ActivismSportsAdulting
About usAdvertiseTermsPrivacyDMCAContact us
® 2023 ODYSSEY
Welcome back
Sign in to comment to your favorite stories, participate in your community and interact with your friends
or
LOG IN WITH FACEBOOK
No account? Create one
Start writing a post
Politics and Activism

Words Stay With You, Especially The Lies

Not everyone you meet will be like the one who scarred you, though. 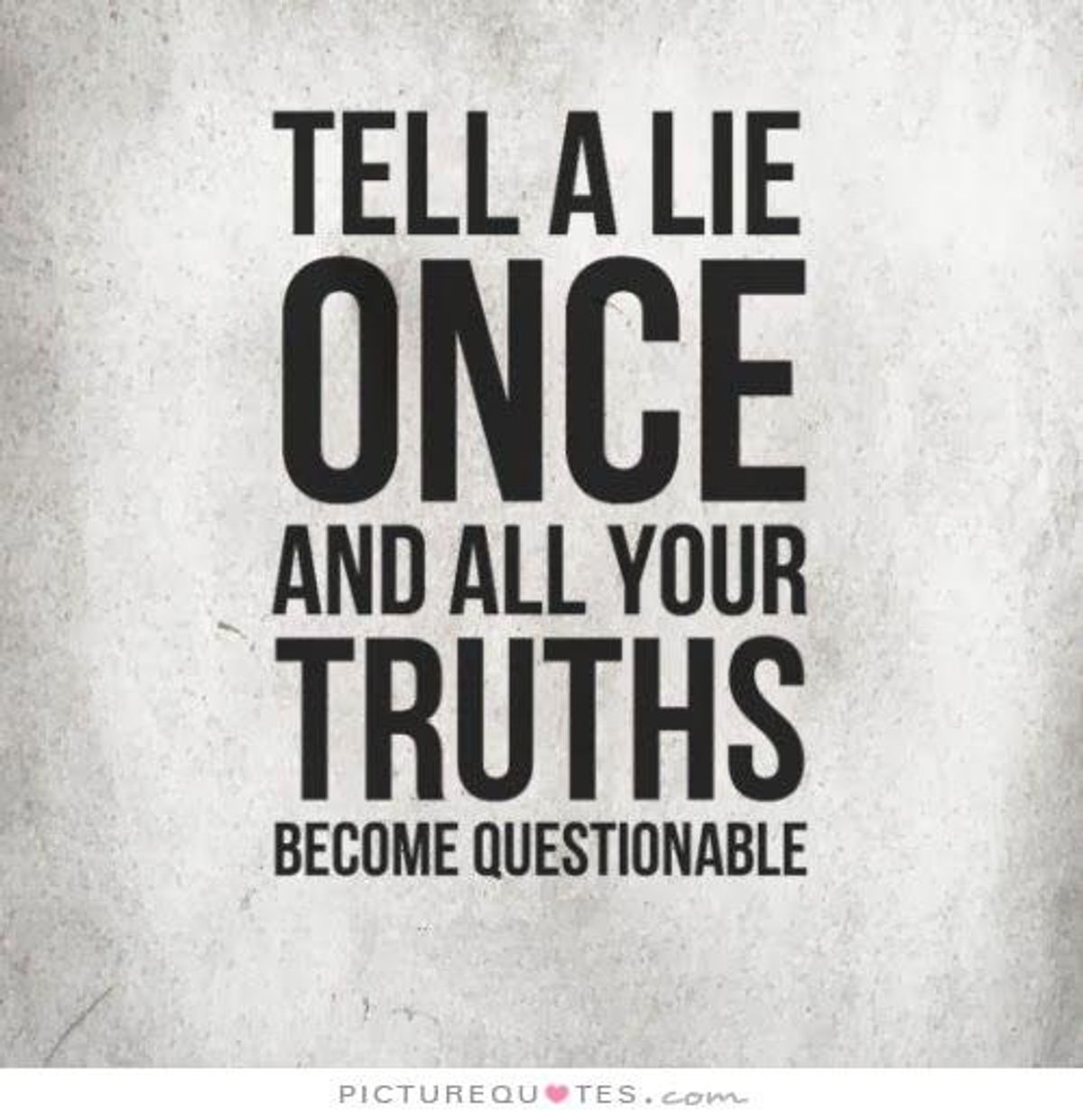 Words. They stay with you. Negative. Positive. Sad. Happy. Compliments or insults. Truth and lies. Words are like superglue that gets inside your mind and stick there. And sometimes those words affect how you see things in the future, and leave you wondering about the past. We all love encouraging and positive words to help get us through the day, but it’s often the negative ones that impact us and engrave themselves into our minds. So this is for you, the one who has had their mind played with just a little too much.

Sometimes negative words might bring you down, but other times they may encourage you to try harder just to prove someone wrong. Sometimes, proving someone wrong is one of the best feelings. But to some, messing with peoples’ minds and feelings is just a game to them. Being lied to is one of the hardest things to overcome, but in the end, it is possible.

If I could say anything to the person who broke your trust by lying to you, it would simply be, "Why? Why would you lie to someone who would have done anything for you at a certain point in your life? Why try to hide your lie with another lie? What satisfaction are you getting out of dwindling down the trust between you two? Do you not care enough about that person that you can’t be upfront with them?" And if I could say anything to you, it would be to not fall for their game: don’t fall into their trap when you know the truth, don’t let them manipulate you into thinking you’re in the wrong. I promise you, your sanity is more important than someone who can’t even be honest with you.

Trust is one of the most important things in any relationship- whether it’s a romantic one, a family bond, a friendship or a working relationship- you build the foundation on trust. We’ve both heard the saying, ‘trust takes years to build, seconds to break and forever to repair’. And it is true- trusting someone takes time, especially when you’ve been hurt in the past.While that trust is shattered in a mere two seconds, it might never be repairable. Once a lie is told, every word becomes questionable. I know that someone may have lied to you, someone you thought you could trust with your deepest and darkest secrets, and now you can only wonder how you’ll ever trust someone again. My advice to you is to give the new person who hasn’t betrayed you a chance to prove themselves.

It’s easy to think that everyone is like the person who scarred you in the past, but that isn’t always the case. I’m telling you this because I’ve been through it. I’ve been lied to and manipulated, tried to see the light in the situation, handed out second chances, only to come to realize that I couldn’t change a person. Although you can’t change a person, you can change your decision on having them in your life. Forget about the one that hurt you, and move onto better things. Don’t think that everyone will treat you the way you were treated before, because not everyone will be like that. After all, when you stop and think about it, you wouldn’t hurt someone the way the person who knocked you down hurt you, right? So, there you go. Stop looking for someone’s old flaws in a new person.

The one thing I want you to remember is you’re beyond deserving of someone who cares enough about you to not let your heart break. I know you’re sitting there wondering what was actually true in the past, and what will be true in the future, but live for right now. It’s not unusual to put up a wall after you get hurt, I know you don’t want to feel that pain again. So go ahead, put up that wall, but also don’t be afraid to let someone over it eventually.