Why I Marched
Odyssey 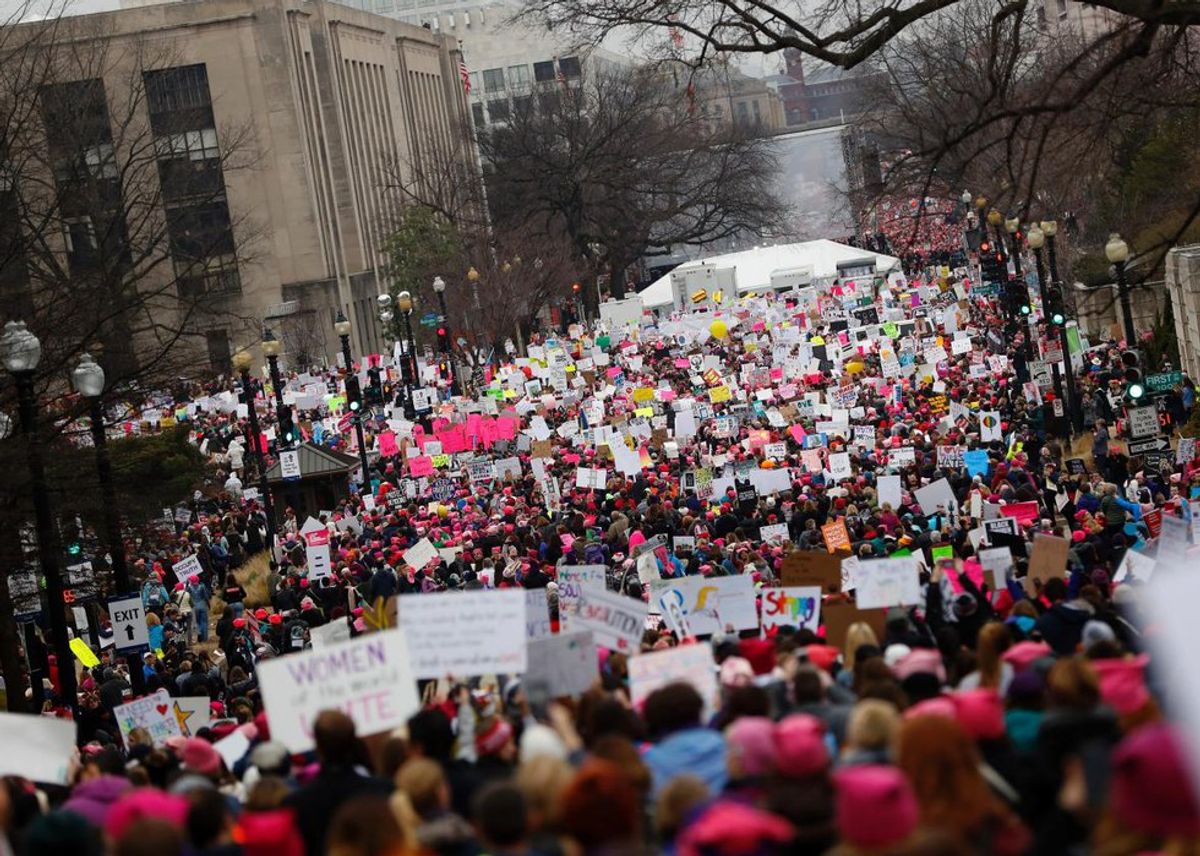 I was lucky enough to go to the Women's March on Washington with a group from my school. Anyone who has been in a public place with me knows that I absolutely HATE crowds. They make me freak out internally and very rarely externally.

So, you're probably asking yourself why in the hell this anxious by nature claustrophobic with a particular "fondness" for unending crowds went to a march where AT LEAST half a million people were.

I would like to say that the answer is simple, which would coincide with my usual snark, but it is actually pretty complex.

The Spark Notes answer is that I marched because I am out and proud.

Coming out was a bit of a hot mess for me, like too many things in my life. From what I remember, it just kind of happened while I was an emotional puddle. The weirdest thing is that the people I came out to knew and had known for a long time. They were just waiting for me to say something. My coming out story is like me, a little odd.

As the events leading up to the election unfolded, I felt more fear than I had ever while I was in that closet. I still am afraid, not just for myself, but for my friends of all different backgrounds. So many of my friends were already afraid, because people hated them for something that they can not hide, nor can they change. After the results of the election, their fear understandably escalated. For me, the Pulse Nightclub shooting put my fear at uncomfortable levels. After the election, the fear changed. It went from a black cloud to something that I use to add fuel to my internal fire.

Yes, I am afraid because there are those out there who want me dead because of something as intrinsic to me as my brown eyes, but, there are so many, like myself when I was younger, who are afraid of the effect that this intrinsic thing will have on those closest to them. Since I am so comfortable with my sexuality, my friends and I often make jokes along the lines of "Yeah if you ever go missing I'll just ask if people have seen the gayest person alive" to "I feel like if it were possible you would poop rainbows" to so many others. In this, I realized that there is no putting me back in that closet. Whenever I get scared, I reconcile my fear with the idea that there are so many out there who are scared to be who they are. While I would never push them to come out, I want to provide an example that, while being out, you can do kind of ok for yourself. I did not choose to love who I love, but I can choose to be proud about it. Seeing out, and proud individuals did, and continues to reassure me that it will be ok.

I am going to keep my comments about being a woman to a minimum, because, if not, it will be a thesis length tangent. My main reason for going to the march that is NOT my sexuality is the fact that too many people close to me, so close to me that they are a part of my heart, have been sexually assaulted/abused. The President's comments about women left me teeming with anger. I am not the only one who has people close to them that this happened to. In no universe is it ok for anyone's people to feel the way that those close to me have. I know I am not the only one that wants the nights I have spent holding crying friends until they fell asleep to end. They shouldn't have even had to happen to begin with.