What's Going On In Aleppo And Why You Should Care
Odyssey

What's Going On In Aleppo And Why You Should Care 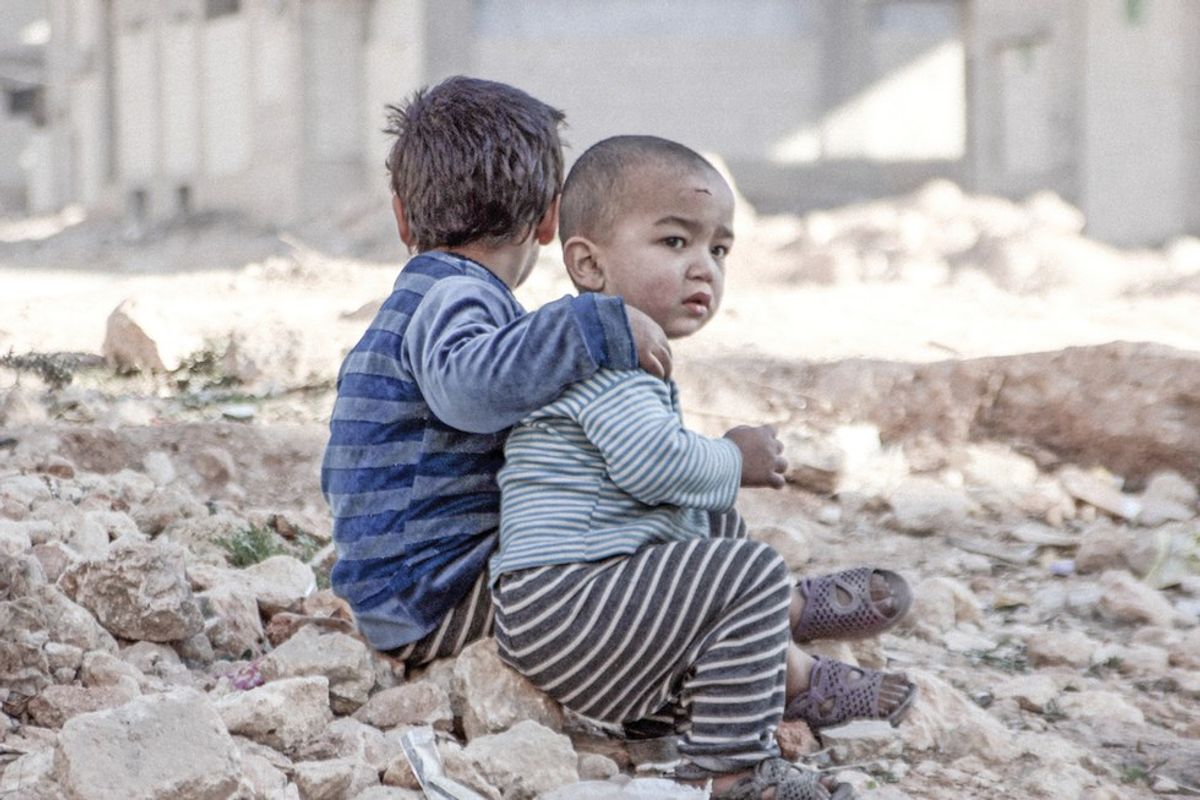 As a society, we tend to have the "If it doesn't affect me, then I don't care" mentality about a lot of things. It's especially easy to look the other way when the problem at hand is far beyond our national borders. But when a humanitarian crisis like Aleppo reaches such a large scale, we can no longer continue turning our backs.

How did it all start?

A civil war has been raging in Syria for years. The battle that everyone is talking about is happening in Aleppo, which was formerly the largest city in Syria. Before it was torn apart by war, Aleppo was a major commercial center and home to major supply lines, which means that whichever side had control of the city had control of supplies, causing the other army to suffer.

As is the case with most civil wars, the rebel forces (backed by the United States, Saudi Arabia and Turkey) are fighting for freedom from an oppressive government regime under Syrian President Bashar Assad (whose forces are backed by the government, Russia and Iran). The rebels felt that their political, cultural and religious views were being oppressed. They also resented the way that the government was handling the economic crisis at the time. The government retaliated harshly against the peaceful protests and a revolution was born.

Where does the United States come in?

When the war began in 2011, the U.S. was reluctant to get involved. However, in 2014, the government began monitoring ISIL's involvement in the war in Syria. The United States, along with other rebel-allied countries, began offering training and supplies to the rebel forces. President Obama said that he has "made it clear that we will hunt down terrorists who threaten our country, wherever they are. That means I will not hesitate to take action against ISIL in Syria, as well as Iraq."

The Department of Homeland Security has pledged to take in 10,000 Syrian refugees. Some cities welcome the influx of immigrants, saying that the humanitarian gesture will boost local economies and help grow the labor force. Other cities expressed concerns about potential terrorists being brought into the country. Currently, 28 other countries have agreed to provide refuge for the fleeing Syrians.

It's looking bleak for the rebel forces. Assad's government forces have been steadily bombing their way through the city and have regained control of any areas the rebels had taken. The city had historically been divided between rebel and government control, but government forces are now claiming victory. Trapped civilians have been taking to social media, first with pleas for help, and now with goodbye messages. An estimated 100,000-250,000 civilians remain missing or are trapped in Aleppo, unable to escape.

The United Nations Security Council finally voted to deploy staff members to monitor and assist with the evacuation of Syrian civilians. They also made a plan to ensure that humanitarian aid will reach those that need it in Aleppo. Russia, who supports the government forces, has continually used its power in the UN to prevent the council from maintaining a cease-fire and from forming a resolution to end the five-year war. The main priority as of now is to protect the refugees and trapped civilians from the deadly Syrian winter.

How does this affect you?

It’s easy, as we sit in our comfortable homes with the power of a great nation ensuring our safety, to say that we need to stop meddling in the Middle East or that the U.S. should stop providing aid to foreign nations altogether. “Let them worry about themselves and we’ll worry about ourselves,” we say.

But it’s not quite as simple as that. After the Obama administration was pressed to pull troops from the Middle East, we left the countries helpless. Maybe we never should have gone into the Middle East at all, but there’s no changing the fact that we did. We sent our troops over, promising to help the countries build a democracy and to strengthen their armies, and then we left before they’d gotten back on their feet. It’s rather like the classic Peanuts scene, where Lucy promises Charlie Brown that she’ll hold the football for him to kick, and then yanks it out from under him at the last second so that he falls flat on his back, leaving him worse off than he was before.

Aleppo is just one of the many areas that was negatively affected by our rapid change in foreign policy. The blame for the Syrian war does not fall entirely on the U.S., but we certainly carry some of the blame. These nations wanted help to “westernize” their governments, but with the absence of a Western force to help them achieve these goals, small extremist groups have moved in and wreaked havoc.

We could debate the reason for pulling the troops from the Middle East and we could point the finger of blame all day, but this won’t achieve anything. This isn’t a U.S. problem, or a Russian problem, or even a Syrian problem. It’s an issue of human rights and human rights should be everyone’s problem. There are plenty of ways to donate right now to Aleppo to help save the victims of war. But what’s even more important is to look to the future for change.

The burden of war is soon going to fall on the shoulders of our young generations and Syria is going to be the template that we use to decide how to proceed. The way that we fight wars, or hopefully, the way that we prevent wars, is going to have to change, especially in light of our dwindling natural resources. Our generation will be deciding how to solve these conflicts and how to rectify the aftermath. We need to stand up for marginalized countries like Syria. We need to end their suffering and protect other countries from meeting the same fate. We need to end the cycle of violence in the Middle East.

It starts with taking a stand. Taking a stand for the rights of all people in a way that makes people pay attention. Being a voice for those that don't have a voice. Being informed and remembering the mistakes that have been made in the past in order to not repeat them in the future. It starts with us.