Why This "Social Experiment" Pisses Me Off
Odyssey

Why This "Social Experiment" Pisses Me Off

We need to see why All Lives Matter is so offensive to black Americans. 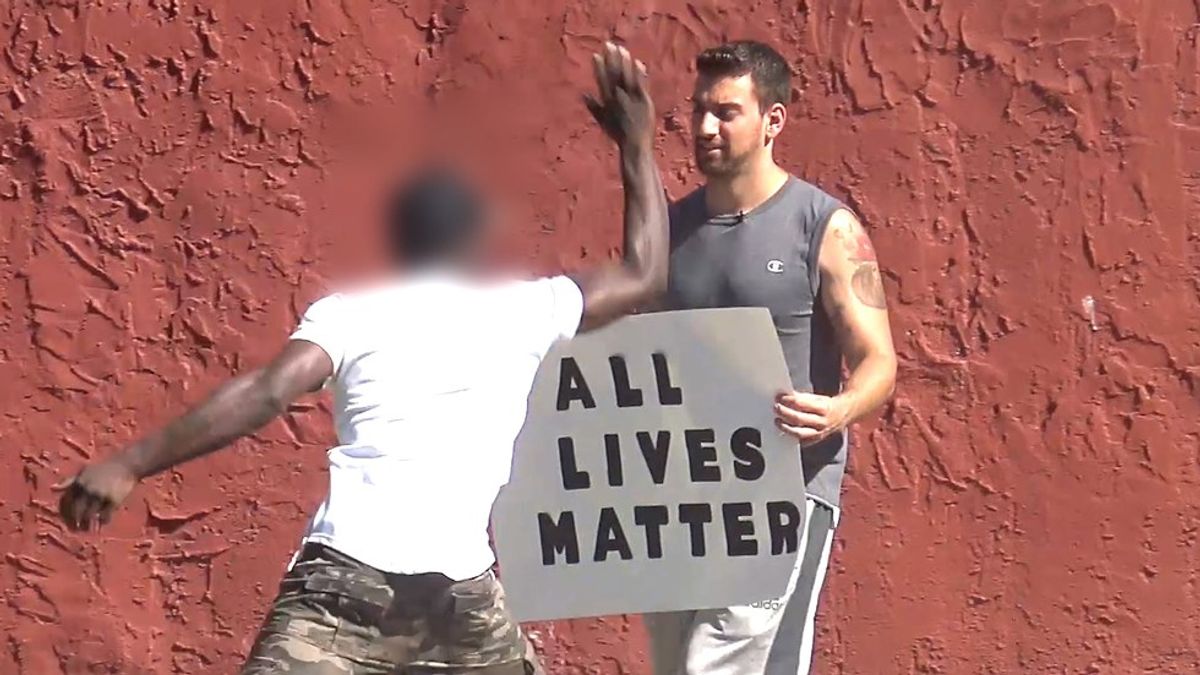 So recently while scrolling through Facebook, I saw a video of a guy who decided to do a social experiment. He held up a "Black Lives Matter" sign outside of a grocery store in a white neighborhood and an "All Lives Matter" sign on the street of a black neighborhood. If you haven't seen it yet, check it out below - the results are a bit shocking, to say the least:

Now, here's the problem I have with this video. While it does seem this guy was genuinely just curious about how people reacted, and I'm willing to give him the benefit of the doubt on that, this video basically perpetuates the lie that black people are violent and that, really, their lives don't matter.

You see, when you stand on a street corner in a black neighborhood with a sign saying "All Lives Matter," the assumption is that you think the Black Lives Matter campaign is wrong. While your sign literally says all lives matter and all lives includes black lives, the All Lives Matter movement was born out of an opposition to Black Lives Matter. Maybe you really do mean that everyone's life is important. But to a black person walking past you, all they see is another white guy trying to tell them their struggle is irrelevant. I would be pissed, too.

I want to believe it's a given in this world that all lives matter. That's why the Black Lives Matter movement holds so much weight because it's a reminder that even though we preach that all lives are important, we're really excluding black lives in this country. Have you looked at the news? Black Lives Matter is a campaign that we need so desperately. Because all lives matter, but the darker your skin is in America, the less your life seems to count.

I mean, just look at the contrasts in this video! In a white neighborhood, this man stands outside of a grocery store. Why doesn't he stand outside of a grocery store in the black neighborhood? Probably because they don't have one. Probably because a disproportionate amount of poverty-dense areas are primarily black, and in these poor areas people live in food deserts, where the closest fresh vegetable is too far away to get to in an average week. But it's okay, because "All Lives Matter," right?

Black people in our country deal with so much crap, and it drives me crazy that we're still even having this discussion. I'm a white 22 year old female from a mostly-white neighborhood, so I'm not the best spokesperson on this issue by any means, but from my perspective white people need to start standing behind and supporting black people, accepting the implicit bias we all have, and changing how we think about race. Call this video a social experiment, but it's really one more check mark people can put next to why black people cause their own problems. From the skewed view of a 4 minute video, a person can base their whole understanding of race, and isn't that crazy to anyone besides me? It is, right?

In the end, this is why I think this man got the reactions he did. When he stands in a middle-class white neighborhood holding a Black Lives Matter sign, people politely disagree and go about their day (some not so politely, but let's ignore that - he sure did). But when he stands on the street of a black neighborhood with an All Lives Matter sign, people in the community actually physically attack him. Why? Because they live a life we don't understand. I can't change my skin color any more than anyone else, and so no, I don't know what it's like to black in America. But I'm damn tired of watching black people die over and over again, and I'd have to guess the black community is, too. And if you just watched people getting shot by cops because of their skin color on the news and then walked down the street to see some white guy with the audacity to hold up an All Lives Matter sign... I don't know, I'd be pissed, too. It doesn't really affect the life of a white guy in a grocery store, but it sure as hell affects the life of a young black man in America.

So let's just stop, okay? Let's stop pretending All Lives Matter isn't a direct insult to black people in this country. Let's stop pretending these "social experiments" are harmless. This video really makes me upset, and I hope other people agree with me on this - we need to just stop and realize this is an issue that isn't going away, and that we need to start constructively talking about. Now.