Why Resident Evil 4 Is The Best Game To Ever Exist
Odyssey
CurrentlySwoonLifestyleHealth & WellnessStudent LifeContent InspirationEntertainmentPolitics and ActivismSportsAdulting
About usAdvertiseTermsPrivacyDMCAContact us
® 2023 ODYSSEY
Welcome back
Sign in to comment to your favorite stories, participate in your community and interact with your friends
or
LOG IN WITH FACEBOOK
No account? Create one
Start writing a post
Entertainment

Why Resident Evil 4 Is The Best Game To Ever Exist

It's arguable that Resident Evil 4 is the closest a video game has come to being a perfect work of art. 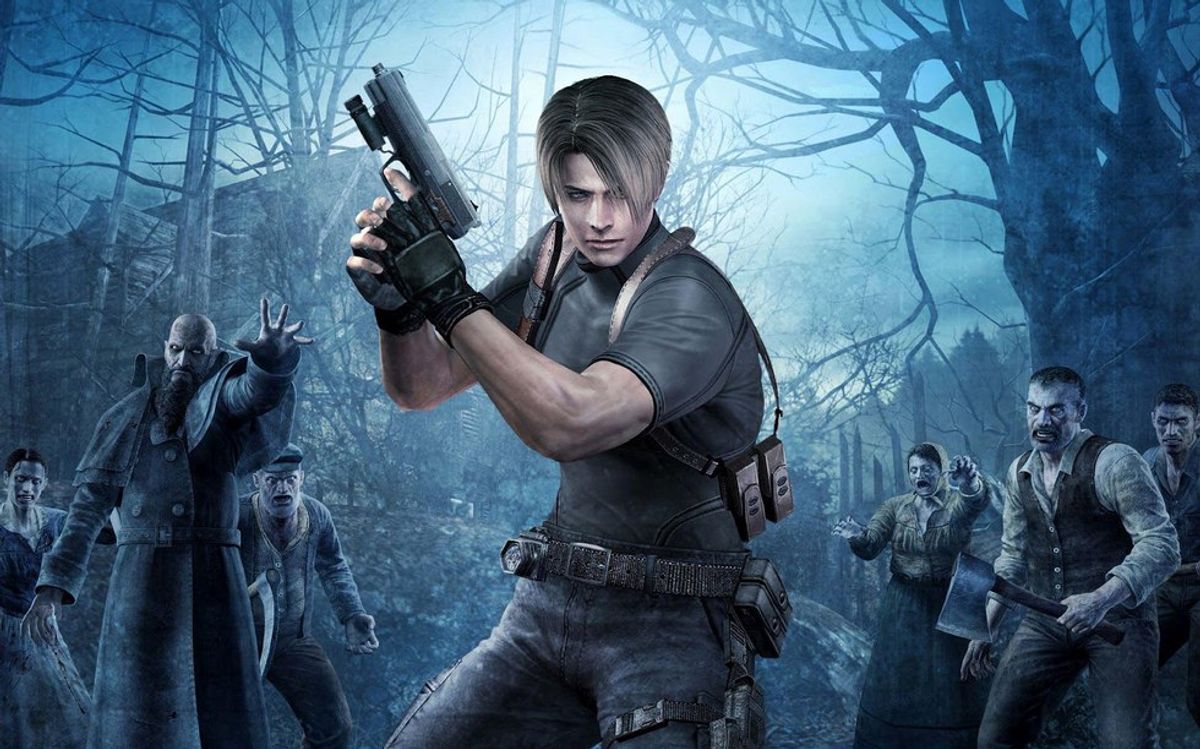 In 1996, Capcom unleashed a revolutionary video game to the masses: Resident Evil. This game, with its deathly atmosphere, constant dread, and hellacious array of monsters pioneered the gaming subgenre known as survival horror. The game was a hit – sequels, spinoffs, ports, and remakes were sprouting in constancy, guaranteeing users their fix for fear-induced adrenaline. As of January 2017, the series has sold over 75 million units worldwide with the release of its 24th title, Resident Evil 7.

In December of 2007, eleven-year-old Avery was blessed with a copy of Resident Evil 4 for the Wii. After researching the game online for months and obsessing over the lore like nothing in the past, I finally had my chance to fall in love with the series like everyone else. I remember how often I told myself that I didn’t want to go down a certain hallway and how I’d have to sit in safe rooms for minutes at a time just to gain the courage to advance. Despite my anxieties, something in me didn’t want to stop; I needed to know how the game ended, and I needed to continue fighting and learning every little detail about it.

Suffice to say, I completed it (and had a few nightmares on the side). I knew it was scary and that a youngling like me shouldn’t have been exposed to such violent imagery, but the game was so much more to me than a scare and a laugh. I was fully enveloped in the world of Resident Evil; the lore it had to offer and the engaging storyline were only parts of what kept me going. And I still am! After ten years of knowing this game inside and out, I’ve still yet to doubt that this is a perfect game. The inane yet self-aware cast, intense horror-action, and stellar overall design have kept me coming back to Resident Evil 4 for a decade.

The cast of Resident Evil 4 cannot be an idea that someone seriously cultivated. The characters in the game are some of the most bizarre, obnoxious, and memorable ones in the entirety of the series. The lead protagonist, Leon Scott Kennedy, is a smarmy, too-cool-for-you tough guy who always has a snarky one-liner and an inappropriate haircut for his line of work. Leon gracefully balances himself on the fine line between irritating and hilarious; certainly, his comments aren’t appropriate for the situation, but his unapologetic and uncaring attitude set him apart from the constant danger he faces. Jim Sterling of Destructoid lauds Leon’s obnoxious character for his power to “piss off his enemies by being really, really, really annoying.” For instance, a lead antagonist, Ramon Salazar, tells Leon that he’s sent his right hand to dispose of our fringe-bearing hero; Leon, in his typical fashion, responds by asking, “Your right hand comes off?”

Of course, Leon isn’t the only character to beat your suspension of disbelief into a bloody pulp. One of your comrades, Luis Sera, is a disgusting, perverted Spaniard who is secretly a brilliant scientist, bordering on the label of biological terrorist. The aforementioned Ramon Salazar is a tantric, spoiled 20-year-old prince with the body of a middle schooler and the complexion of an octogenarian. He has a sixty-foot, animated statue of himself that chases Leon down a hallway. Why? Because it’s Resident Evil 4. The omnipresent merchant exists only to sell you guns and make quips towards the quality of your treasure. Ashley, the archetypal damsel in distress, is loud, annoying, and bratty throughout the whole game. Critics pan her as the worst part of the game, but what can you expect from someone who’s supposed to be the president’s daughter? Her character, alongside all the other characters, fits her mold perfectly. These characters are all outlandish and unrealistic, and they work in tandem to provide the player with memorable scenes and conversations.

The gameplay of Resident Evil 4 is enough to warrant its near-unanimous rave reviews. Critics, while few in numbers, cite the departure of classic Resident Evil gameplay as its most substantial downfall. However, while the camera angles are dynamic and the action elements are more prevalent, the game is infinitely more faithful than more recent adaptations of the series. There’s a telling bridge between action and horror, presenting the player with a yin and yang of heart-thumping situations that are muddled into a then-unprecedented level of intensity.

When the game wants to scare the player, the game will scare the player. Tight corridors lead the hero and his controller into oppressive atmospheres and unfathomable beasts. The soundtrack, which will be covered in greater depth later, complements the alien atmosphere and sends tingles down the player’s spine. Of course, the game knows when music can or cannot be effective. About halfway through the game, Leon must fight his way through a maze filled with rabid, tentacular canines. The panting and slowly increasing volume of paws scouring the maze accompanies the player in lieu of a soundtrack, giving the air that something bad could happen at any moment.

Oh, and the Regenerators can and will make you void your bowels on first encounter.

The element of horror isn’t all that makes this game into a masterpiece, though. The game is built around its action-heavy moments; the player will be able to mow down a roomful of enemies in one room while strategically working their way through hallways of traps and angry cultists to the next room. The game is unforgiving and difficult, but you’ll know when you’ve done a good job. With the countless amounts of enemies and boss monsters that can be in a room at one time, you’ll constantly be on edge – less of a horror vibe, but more thrilling, so to speak. In one area of the game, Leon and his fire-forged ally, Luis, have taken control of a small cabin in the woods. Dozens of hypnotized, fanatic villagers force their way into the humble abode, while our heroes slowly but surely run out of ammunition and healing items. The action you see in this game is unparalleled; every encounter is built to work with the game’s core engine, but it is never in your favor.

Of course, none of these elements would work nearly as well if it weren’t for the beautiful, gloomy aesthetic of the game. Simply put, Resident Evil 4 is not a pretty game. Every corridor and structure is intricately designed to make the player feel unwelcome in this unreal atmosphere. The castle in which Kennedy finds himself looms eerily in the background near the end of the first act, painting itself even more uninviting as he gets closer. The enemies don’t alleviate the player’s unease, as the bestiary is a mishmash of horrid creatures that take influence from John Carpenter’s The Thing (one of my favorite horror movies – it’s like this game was designed expressly for me!). The dangers Kennedy faces range from uncanny and obviously dangerous to “oh god get away from me get away from me do not touch me GO AWAY GO AWAY GO AWAY.” It’s a beautiful game! It really is. But, as the titular character firmly states in the musical rendition of Shrek, “beautiful ain’t always pretty.”

To only give credit to the visual appeal is an injustice to the phenomenal sound design. Capcom found a wonderful cast for the American translation, including Carolyn Lawrence (Sandy Cheeks in Spongebob Squarepants) and Jim Ward, who consistently provides additional voices for Pixar and Dreamworks films. The enemies give distinct audio cues, giving you the ability to tell when something is behind you or around a corner. It’s still a surprise sometimes, but the player won’t throw the controller at the TV screen (too often). The accompanying music will always suit the mood perfectly, whether the player should prepare a change of pants or gear up for the fight of a lifetime. The one rare, beautiful moment in this game is the discordant-yet-beautiful safe room music – one to which I’ve become quite accustomed to due to being frozen in fear. The audio of Resident Evil 4 is the final piece to create the perfect video game.

In case it isn’t obvious, I love this game. I love it, love it, love it. I’ve loved it since I first picked it off the shelves of my local Gamestop in 2007, and I’m still finding new ways to enjoy it in 2017. I don’t play it all the time, but maybe once or twice a year, I’ll have an immense hankering to re-experience the game’s unyielding charm. The fact that Resident Evil 4 has stuck with me for this long cements it to me as one of the greatest video games of all time.