Why I'm Tired of College Memes 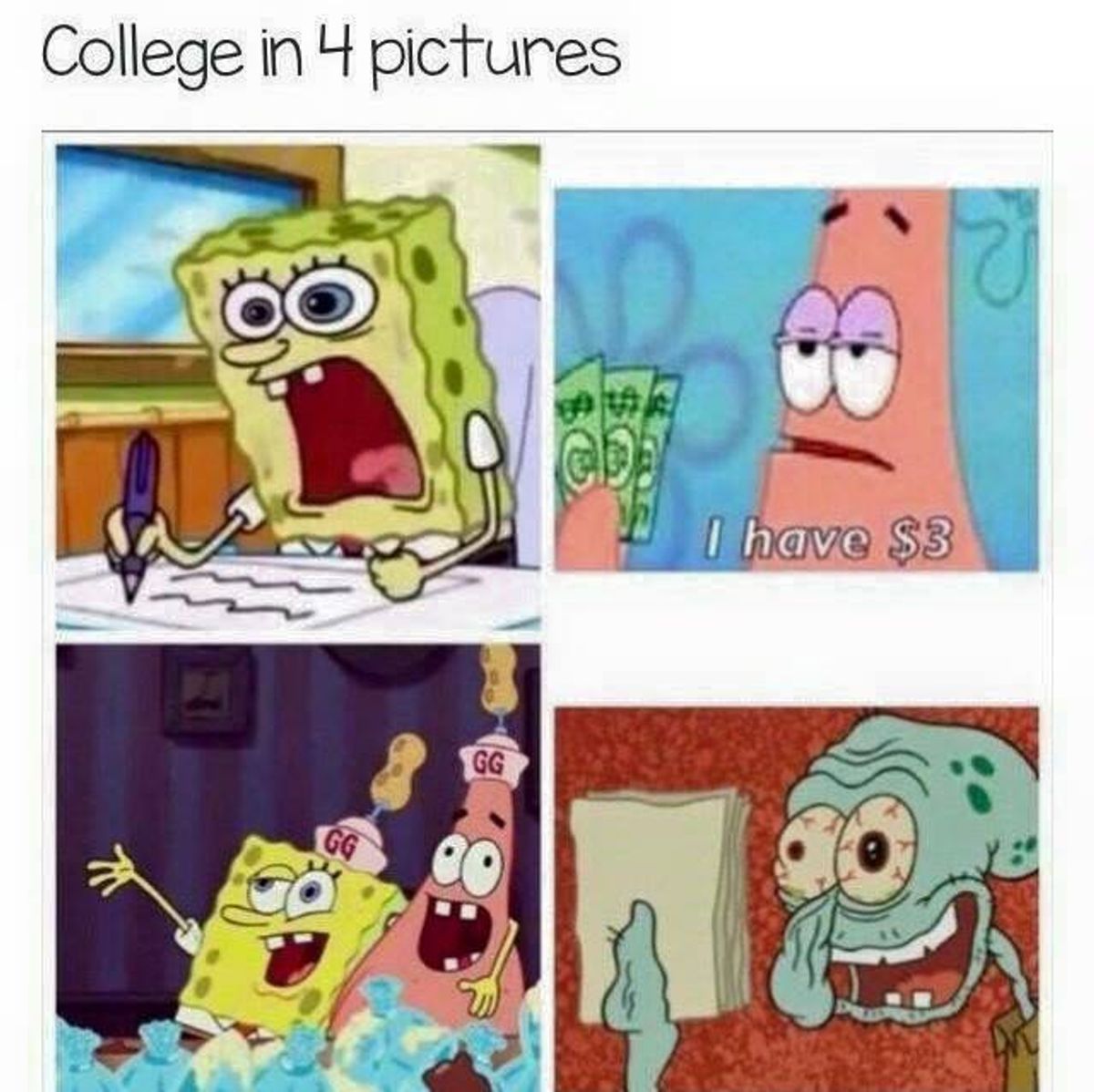 We’ve all seen the college memes that are popular on social media. They range from #relatable videos to funny GIFs (it’s pronounced like “gifts” and anyone that says otherwise is wrong). But whatever the media the memes are shared through, each college meme is about one of four things: being stressed out, being broke, being lazy/resourceful or being tired. I used to find these memes enjoyable and funny because I was in college and I understood the struggle. But now that I’m out of college, I have an outsider's perspective. And I want to offer that perspective by sharing why I’m tired of college memes.

1. College students are stressed out

I actually don’t have a problem with the college memes that show how stressed out college students are. I find these ones genuinely funny and accurate toward life as a college student. I just wish there was more diversity among these memes, and by that I mean there was more to the “stressed out college student” than just that they have a lot of work in addition to their personal lives. Maybe people that create these memes should add how specific teachers/subjects can stress students out or how group projects are the bane of a college student's existence. Something more than just “I have 3 term paper, 15 tests, 36 billion research papers and an experiment of how to pull a golden egg out of my butt due tomorrow” memes.

These are the memes I have the most problem with. Of course my opinion on this is biased because I went to an expensive private college as a low-income individual, but these memes aren’t accurate to life on campus. Sure, the majority of college students are working in some capacity and are paying for themselves outside of money for tuition and room/board. But having gone to a private college, I found that most of the students were able to call in favors with their parents for the smallest things.

As someone that went to college low-income, I didn’t have that luxury. I only went to my mom if I needed help with a large amount of money, and even then I helped her pay for whatever it was. She didn’t just pay for me to have something.

So I have a hard time with these memes. Yes, most college students are living on a budget, but many of them are not “broke.” They have their parents to fall back on and oftentimes do. Most of the time if someone in college has their parents money to utilize at school, they do — at least that's how it was with my experience. Their parents may not pay for the Ramen these students live off of, but they pay for the students to go on ski trips and study abroad programs.

Many college students are broke, but I have a problem with the memes that perpetuate this stereotype because many other students can rely on their parents. It’s not a negative thing that these students have family money, it’s just not #relatable, which is the general point of a meme.

I don’t like these types of memes because it’s self-hating. Some college students are lazy, but most work incredibly hard to pass their classes with good grades, keep up their social lives, work and build a portfolio for after they graduate. When we share these memes that claim how students will neglect their homework in order to catch up on their favorite Netflix show, it encourages these students to procrastinate instead of motivating them to continue with their work —which is what college students really need.

Students are hard-working and dedicated to their grades (most of the time of that latter one). These “college students are lazy” memes only serve to derail students from their motivation. It’s okay to slack off every once in awhile, but wouldn’t you rather have a meme that’s #relatable because it expresses how busy you are instead of how much you procrastinate?

Just like number one, I don’t have a problem with these memes, I just think the “college students are tired” memes have potential to become even funnier.

College memes are prevalent throughout social media because they are #relatable and give an accurate depiction of what college life, at least, feels like. I don’t hate these memes, I’m just tired of seeing the same ones pop up in my newsfeed. And the ones that I especially dislike are because these memes are self-harming and self-judgmental of college students and only serve to discourage students from working hard instead of giving them something positive to find relatable.

(For example, I find this one above really funny and accurate).

Regardless if you agree with me or not, I’m tired of the current college memes and am waiting for the new ones that I know will inevitably evolve from the present batch of videos, GIFs (like “gifts”) and tweets.
Report this Content
This article has not been reviewed by Odyssey HQ and solely reflects the ideas and opinions of the creator.

Caitlin Marie Grimes
University of South Florida
9173
Beyond The States