Why I'm Getting A Semicolon Tattoo
Odyssey

Why I'm Getting A Semicolon Tattoo

Because my story is not over yet. 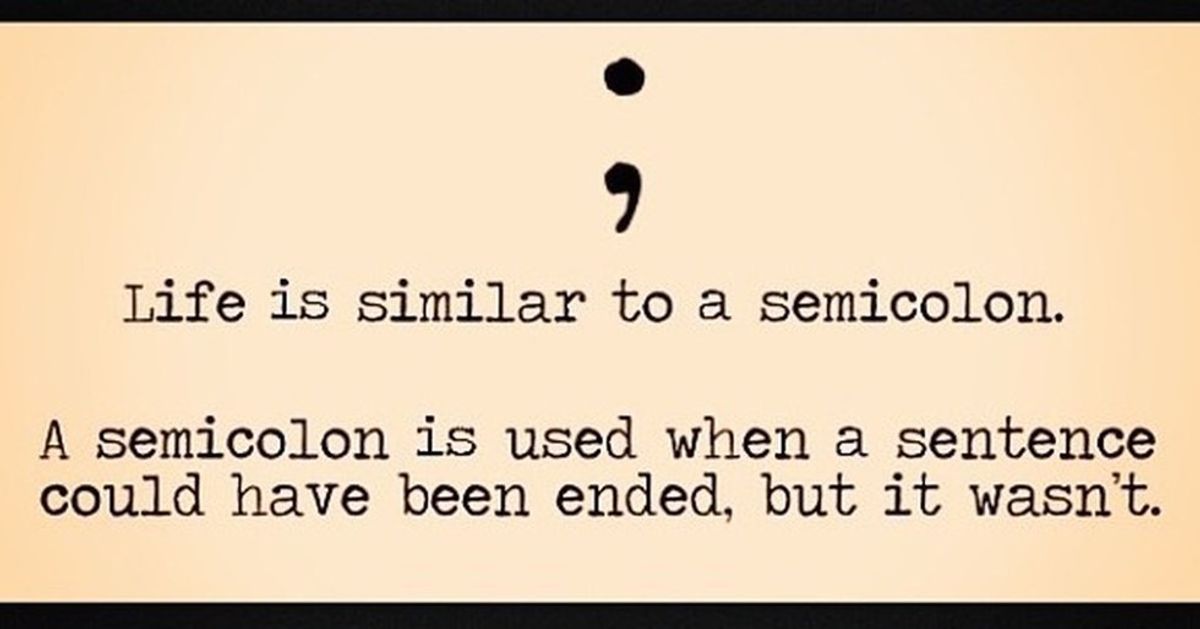 When I was in my teens, I used to doodle on my left arm with a sharpie. Sometimes, during particularly hard days, this doodling would cover everything from my forearm to my wrist. Usually I just had some simple design outlining the inside of my wrist. It was a common thing for others to see the designs I drew on myself- sometimes I got compliments from them, other times a sideways comment to cut it out.

What most people didn't know, though, was I did this for a reason. I struggled with depression and anxiety many years of my life, and though I never told anyone anything, sometimes that simple drawing on my wrist could get me through another day. I didn't know why, or how, but looking at those twisted drawings lacing up my arm gave me some sort of comfort.

Today, I realize that was my way of trying to cope with my illness. Instead of hurting myself, I drew. I drew until I was tired of drawing and I just stared at the design, knowing that even if I wasn't okay, life would continue, and somehow things would be better. I didn't know when, and I didn't know how, I just knew.

And while I can't speak for anyone else who has suffered through depression or anxiety, I can say that there are days that I still draw. I realize that sharing my struggles could potentially help someone else suffering from the same thing. While it may not be easy or comfortable to say, I think it's a worthwhile notion. And there is a project that believes the same thing.

I got my first tattoo almost a year ago. It's a simple, minimalistic black ampersand on the inside of my right ankle, and I did it for two reasons. One, because I consider it to be my symbol to represent everything I've been through and everything I will go through, and two, because though it doesn't have the same meaning as a semicolon, it represents my years struggling with depression and anxiety. It represents my strength, hope, and drive to keep going even though life knocks me down.

Though my ampersand has so much meaning to me, I also realize that it isn't enough. It isn't the symbol that may give people hope in their darkest times- and that is why I'm going to get a semicolon tattoo.

Today I can draw something on my wrist and have it be simply a design I liked, and you have no idea how thankful I am for that. To not sit there staring at the design and knowing if it wasn't for that, I would have resorted to something much worse. But the semicolon tattoo means supporting myself and supporting others from something I would never wish upon anyone, and perhaps giving hope and strength to someone who needs it. I hope that in a year, or a few months, a small black semicolon will be gracing my left wrist.

I urge you, if you're struggling with a mental illness, tell someone. You don't have to suffer in silence. And if you struggle with the knife, replace it with a pen. Go to a councilor for help, or speak to a friend: you are not alone, not matter how much you feel it. But most of all: never give up.

A Promise To Myself