Why I'm Fed Up With "Bernie or Bust"

Why I'm Fed Up With "Bernie or Bust"

It's time to stand with her. 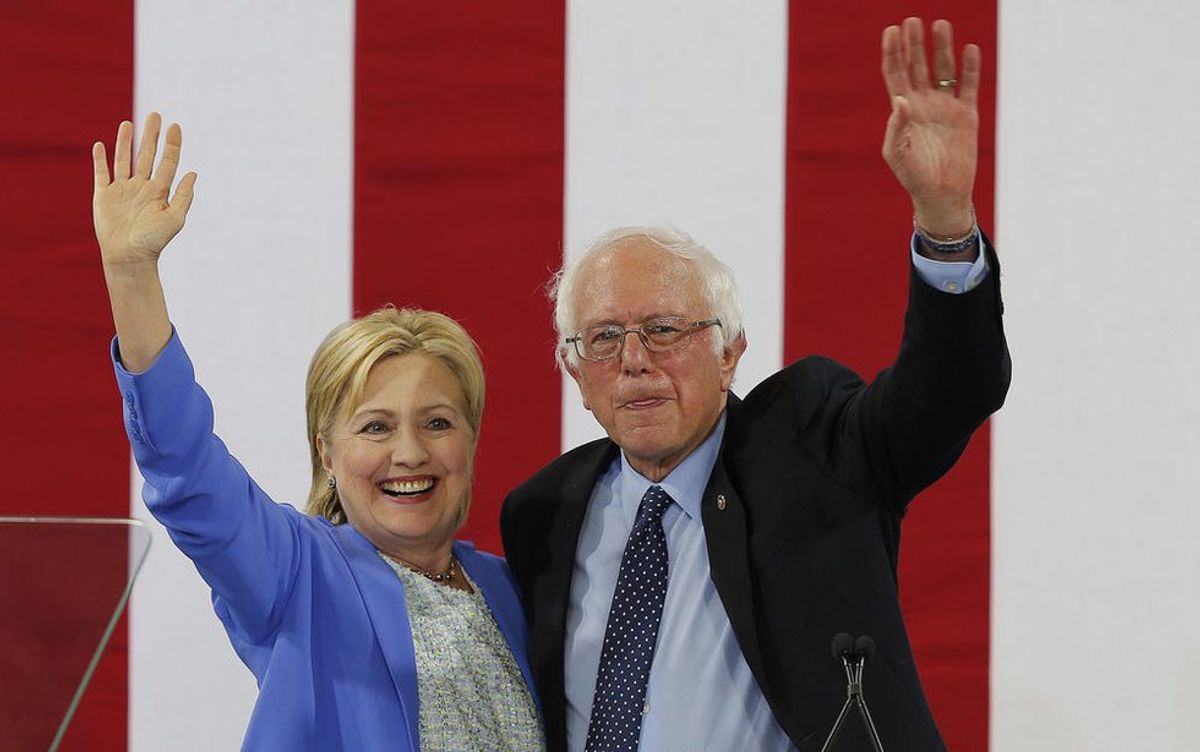 The past month has been difficult for Bernie supporters. We've seen him endorse Hillary Clinton, which was a disappointing end to months of passionate support, to say the least. We witnessed the DNC Leak scandal, proving that Bernie was not supported by the party, and the resignation of chairwoman Debbie Wasserman Schultz, which was heartbreaking (but also, unsurprising). Most importantly, we just watched Hillary Clinton accept the Democratic nomination with Bernie's blessing, leaving many Sanders supporters feeling betrayed and lost. Here's what I have to say: Get over yourself.

Bernie Sanders started a political revolution, and nobody can deny the effect that he had on the 2016 primaries. His campaign motivated voters, young and old, while bringing attention to social disparities and other flaws in the American system. His strong beliefs and refusal to be "bought" by billionaires and businessmen gave the American middle and lower classes a voice. While the primaries were close, he came up short. No matter what you attribute that to (namely, rigging by his own party or simply less support), Bernie Sanders will not be our next president. He will not even be a candidate. And for many, including myself, that is heartbreaking. Recently, though, I have seen many, many posts and comments about "Bernie or Bust!" The idea is simple: because Bernie is no longer in the race, some of his supporters plan to vote third party, avoid the election completely, or... vote Trump.

One of the beautiful things about America is that you can vote for whomever you choose, but I simply cannot understand the train of thought that these supporters have. Hillary Clinton was not our first choice, for many reasons. But many of her platforms, including LGBTQ+ rights, environmental protection, protection of black lives, and more are very similar to Bernie's. She may not be as liberal as our beloved candidate, but she is certainly, CERTAINLY a better choice than Trump. Throwing away a vote for Hillary, whether you don't vote at all or vote for a third party, allows more votes for Trump, making it much easier for him to become our next president.

Bernie Sanders built his campaign on something different than Trump: love. Bernie still presses for economic equality, social justice, and acceptance. Donald Trump and the GOP are running a race to humiliate, objectify, and oppress the melting pot of people that make up our nation; their tactics base themselves on fear-mongering and scapegoating. Sanders has made it incredibly clear that defeating Trump is his new goal, and the goal of the entire Democratic party.

So, "Bernie or Bust" supporters, I implore you to end the bitterness and vote Clinton. America needs a Democrat in office. If you want any liberal agenda whatsoever in the coming years, Trump is not an option, and neither is a third party candidate who has 0 chance of winning an election. Put aside your animosity and accept the only candidate we have that will promote acceptance and democracy in America. It is our job to protect the minorities and groups who will flounder under a man who, time and time again, bullies and tyrannizes them. "Bernie or Bust" is not an option, because Trump is not an option.