Why I'm Excited About the Thirteenth Doctor

Why I'm Excited About the Thirteenth Doctor

With Jodie Whittaker, the BBC enters the present 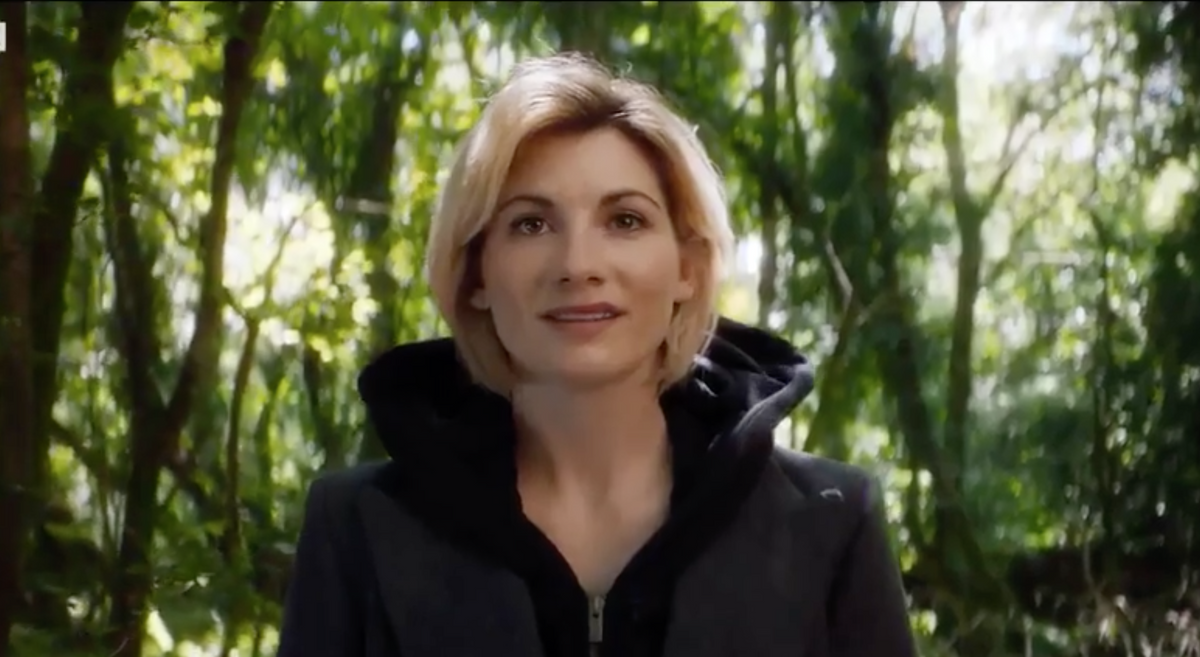 The Master: “Is the future going to be all girl?”

The Doctor: “We can only hope.”

--Doctor Who, “The Doctor Falls”

If, after a line like that in the finale, the new Doctor had been another man, I would have been furious. For the past couple of seasons, Steven Moffat has been dropping breadcrumbs about the possibility of a female Doctor, showing two instances of Time Lords changing gender (and in one of those cases, race). But I’ve been burned by this show before, especially in its writing of women, so when I watched the video announcing the new Doctor, I was anxiously examining every shot for a hint of the actor’s gender: the flowers at the beginning, the ambiguous profile, the feminine-looking hand. When Jodie Whittaker pulled back her hood, my main emotion was relief. They did it. They actually did it. Throughout the day, whenever a gif of that moment popped up on my Facebook feed, I felt a surge of joy. I proudly donned my “wibbly-wobbly, timey-wimey” shirt. I walked a little taller on my way to the grocery store.

Of course, plenty of people weren’t as excited. Men—and even some women—flooded comments sections with cries of the “PC brigade taking over” and vows that even though they were “loyal fans” they would “never watch the show again.” (So not really that loyal, then.) Part of me was hurt by this sexism, but mostly, I was amused. It was ridiculous how outraged these people were by one woman playing a character that’s been played by a man thirteen times. I loved reading the witty replies to these comments and feeling cheered when so many of the people defending Whittaker’s casting were men. I chuckled every time I saw yet another person proclaim, “What’s next? Shelly Holmes?! JAMIE BOND?!”

These would be interesting takes on those stories, just like a female Thirteenth Doctor is to the fifty-year-old Doctor Who. I’m excited about Jodie Whittaker because I’m eager to see myself reflected in this iconic, heroic role, but I’m also excited by all the new storytelling possibilities this casting brings.

Back in the 80s, amidst a ratings slump, Doctor Who co-creator Sydney Newman suggested the show could be saved by casting a woman in the titular role. Instead, the BBC chose Sylvester McCoy as the Seventh Doctor; ratings continued to decline, and two years later the show was cancelled, not to return until 2005. The show is in a similar slump now. The past two seasons have brought the lowest ratings of the reboot. An April article in the Guardian said, “When Chris Chibnall, the incoming showrunner, casts the next Doctor, he needs to shake things up.” (And let’s be clear: Steven Moffat does not get credit for the first female Doctor. That goes to Chibnall.)

I think this shake-up will work. I know a number of people who have stopped watching in recent years, many of them frustrated by Steven Moffat’s poorly-written female characters. Those people are now saying Jodie Whittaker will bring them back.

After the casting announcement, a number of questions about what the next season would look like came into my head. Male or female companion? If the Doctor meets a recurring character, will they recognize/accept her as the Doctor? In each case, both answers offered fascinating possibilities. A female companion would mean two women together in the Tardis; a male companion would mean a man deferring to a female Doctor’s expertise the same way female companions have long had to defer to a man. Recurring characters will either easily accept the Doctor’s sex change—“oh, of course, that makes sense”—or not, in which case a woman will passionately defend her ability to be a hero. One online commenter said that the Doctor has to be a white man so he can easily travel through history. But why does this travel have to be easy? How interesting would it be to watch the normally-cocky Doctor navigate a world in which her authority is questioned? Or in which she proves to a bunch of Victorian men that a woman can save the day? Or in which her male companion has to pretend to be in charge in front of others, but as soon as it’s just the two of them, he lets the Doctor take over? After five decades, it can seem like Doctor Who is out of fresh ideas. This casting will provide a whole host of new adventures.

And of course, the representation it brings is important. Women are just as present in geekdom as men. The audience for superhero TV shows is roughly even in terms of gender. The audience for the opening weekend of Star Wars: The Force Awakens was 42% female. Just as many women attend conventions as men. And yet the most recent season of Doctor Who had just one female writer and one female director. Women love science fiction, too, and we want to see ourselves not just in the audience but on the screen. The Force Awakens showed us a woman can be a Jedi or a general, Wonder Woman showed us a woman can headline a blockbuster superhero movie, and now, a woman can be the Doctor, too.

Two things stick out in my mind when I think about Whittaker’s casting. One is a viral tweet in which a woman recorded her young daughter’s reaction to the announcement video. For most of the clip the girl is looking at the screen, bemused—until Whittaker’s face is revealed. The girl turns to the camera, jaw dropped, and happily shouts, “The new Doctor is a GIRL!”

The second is the final shot of the most recent season finale. Bill (an openly gay black woman, in another great stride the show has made with representation) has been reunited with Heather, her crush from the season premiere. Heather and Bill are setting off to see the universe together. They stand, hands clasped, in the doorway of the Tardis, staring out at the stars. This, I thought, this is what I want.

And now it can come true.