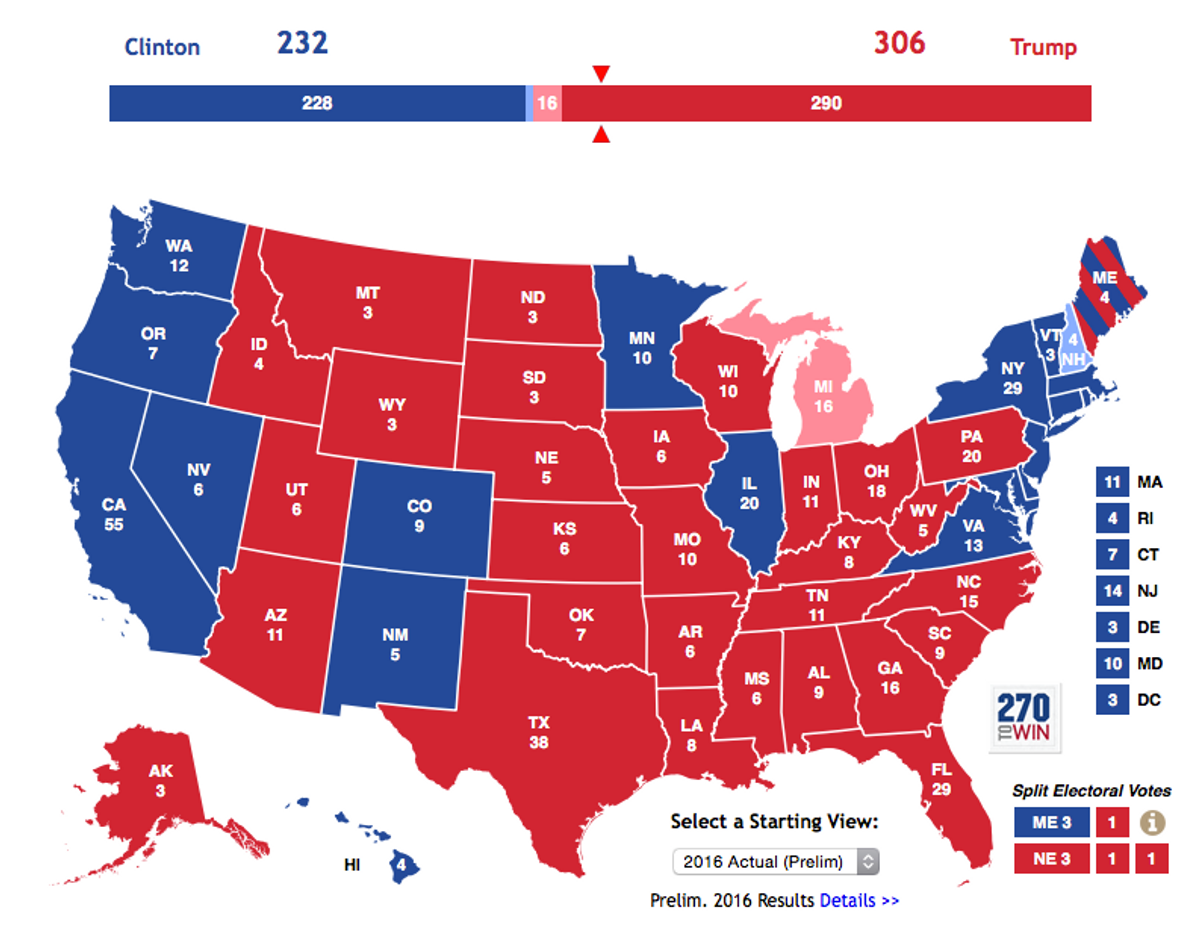 The 2016 presidential election results set a new precedent in the United States history.

Across the nation last Tuesday, the voters casted their ballots and the Republican candidate Donald Trump, a businessman and billionaire real estate developer, was elected the 45th President of the United States and defeated Democrat candidate Hilary Rodham Clinton. The 2016 presidential election results left the nation stunned because Donald J. Trump is the first President-elect to not have a military or political-based background. Additionally, state polling prior to the election favored Hilary Clinton winning the solid democratic states, lean democratic states, and the majority of the battleground state. However, the election results are receiving national controversy, both foreign and domestic, because Donald Trump won the electoral college with 306 votes while Hilary Rodham Clinton won the popular vote by 52%. Throughout the country, American people are protesting the election results, which is similar to the 2000 presidential election. These nationwide protests are vocalizing the American people's frustration with the electoral college system. So, why does the United States still continue to use the Electoral College and why is it important?"

What is the Electoral College?

Instead of establishing a presidential election system through direct democracy, the founding fathers established the Electoral College to ensure the entire nation had more equal opportunities choosing a national president. During a time when the thirteen states were more autonomous and the federal government didn't have as much power as it does today, the founding fathers wanted to offset the chance that a single populous state would put forth a "favorite" candidate that would exclusively represent their home state and disregard the needs of the whole country. Basically, the Electoral College ensures

How many members of the Electoral College are there?

How does the Electoral College work?

What happens if no one gets a majority of Electoral College votes?

If neither of the political candidates receive the majority of the Electoral College votes, then the election is sent before a vote to the U.S. House of Representatives. Each state will make a decisive vote for one of the presidential candidates and the majority vote will be elected President of the United States. The Vice-President process is similar except the U.S. Senate selects the Vice-President of the United States regardless of party affiliation.

What if there's a tie?

Since the number of electors is 538 (which is an even number), there could be a hypothetical tie within a presidential election race. In this case, the U.S. House of Representatives would be selected to choose the President of the United States. This has only happened twice in the nation's history. when there was a tie between Thomas Jefferson and Aaron Burr in 1800 and a four-way split in 1824 between William H. Crawford of Georgia, Andrew Jackson of Tennessee, Henry Clay of Kentucky, and John Quincy Adams of Massachusetts.

Can you loose the popular vote and still be elected president?

Yes, the electoral college system can allow a presidential candidate to loose the popular, but still be elected as President of the United States. In the 200 presidential election, the Republican candidate George W. Bush won the Electoral College vote with 271 votes while the Democratic candidate Al Gore won the popular vote by 51%.

Why is the Electoral College important?

The Electoral College is important because it ensures the President of the United States is selected by the constitutional majority. Basically, the Electoral College magnifies the margin of victory and grants legitimacy to the winners. Let's put this into perspective. Hypothetically, Hilary Clinton's popular vote can increase or decreased from state to state, but it won't change her electoral votes. Other political systems implement the highest-vote automatically wins; however, this indirect selection process has been subject to criticism and has been recently reformed. Charles Kesler explains that the Electoral College combines democracy with federalism: