AKA a feminism that does not embrace women of color and women in the LGBTQ community is not feminism. 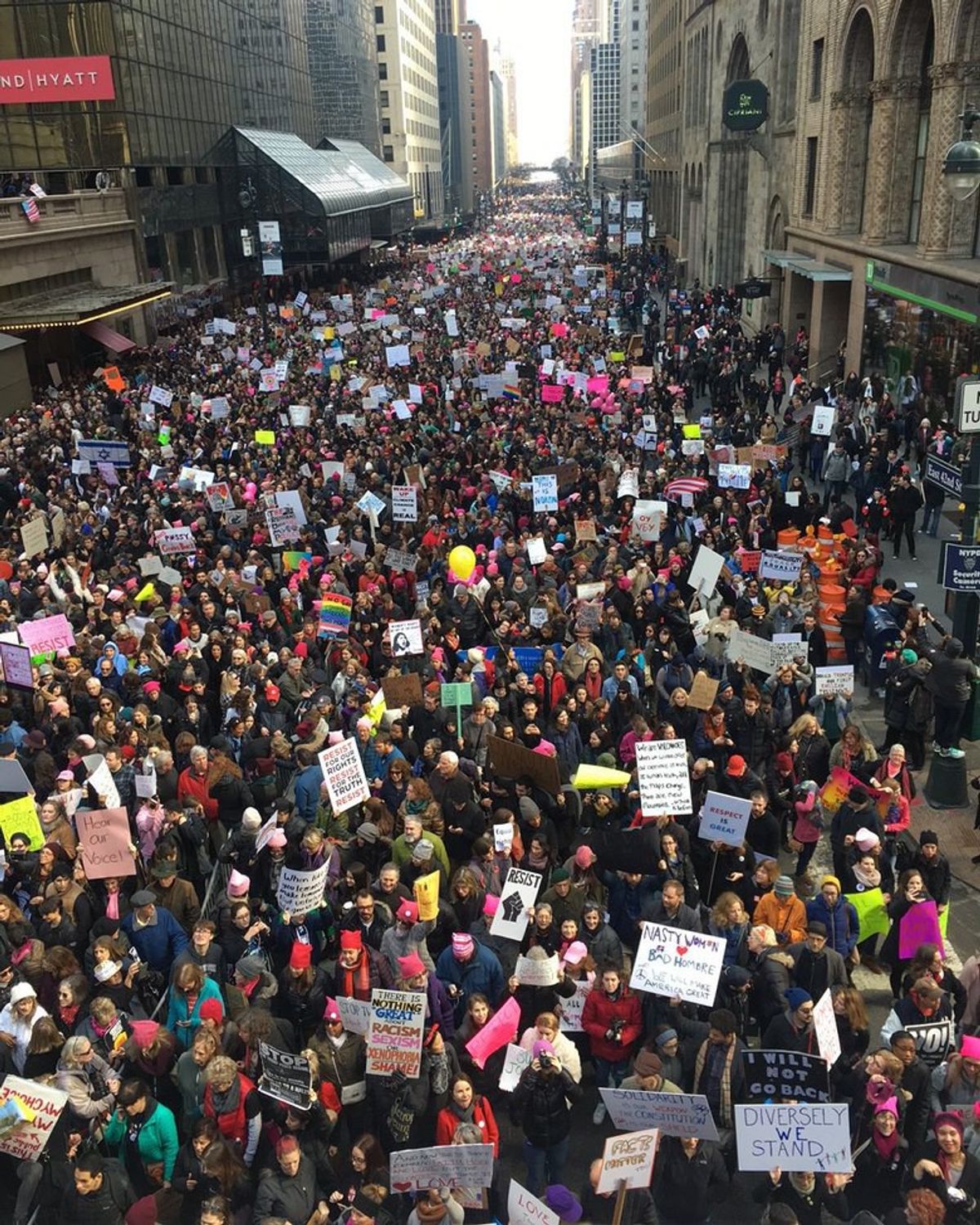 Yesterday, women around the globe, angry at the policies Trump wants to instate during his presidency, marched to protest his inauguration. Trump has spoken out against abortion, has repeatedly said derogatory comments about women, and has been accused by more than one woman of sexual assault.

The protests were cathartic. They were a way to stand in solidarity with other women who were angry and with Americans who were scared of the changes the new administration would bring. They were also frustrating.

Mainstream feminism in the United States has long been associated with white women, as black women and other minorities were often locked out of the feminist movement. Rather than work together, white women often put themselves at odds with anti-slavery abolitionists, suggesting that they would have a more difficult time eliminating slavery and getting the vote and therefore prioritizing one cause above the other. White American women attempting to gain the vote saw black women as "a drag in their campaign." Some suffragists even went as far as to suggest to white southern women that they should gain their right to vote in order to counter the voices of black men. Infuriatingly, white women compared their situation to slavery while not doing anything to stop the very real slavery existing at the time.

During the 1970s, the type of feminism that was promoted was also heavily white. It largely assumed bored middle-class housewives, and strategies such as consciousness raising catered to a richer, whiter group of women while blocking out minorities.

This is not to say that black women and other women of color were not participating in feminist movements of their own during these time periods. They were certainly not inactive. However, they were largely blocked out of the mainstream feminist movement. Grace Hong, a professor of Asian American Studies at UCLA, perhaps puts it best when she states that "historically, the category 'woman', has, implicitly, meant white women."

This is part of the reason why these marches were so frustrating, why it was both annoying and terrifying to see people carrying posters of Hilary Clinton in a form of protest. Clinton would be an advocate for straight white womens' rights. As for the rest of us, maybe not so much. Clinton has spoken out against same-sex marriage before. She has also historically been terrible for the rights of women of color. In the 1990s, she supported the war on drugs, going as far to use the term superpredators. The same policies she supported contributed to mass incarceration, which disproportionately places not only black men in jail, but also black women, who account for more than 30% of all imprisoned women. Her support for mass incarceration also took money away from welfare policies and placed it in the prison system. Clinton also supported her husband during his presidency when he decided to not act against the Rwandan genocide, going as far as refusing to call it a genocide (doing so implies that interference is necessary, according to the UN's responsibility to protect clause, which was put in place after the Holocaust to ensure that another genocide did not occur). She may support abortion and equal pay, but Hilary Clinton failed to support women of color and LGBTQ women.

If you're a straight white woman, it is very easy to focus on the woman part of your identity, because that is the category that is facing the most threat from a Trump presidency. For LGBTQ women and women of color, this is a different story. It is impossible for us to support the brand of white feminism that has often been synonymous with our oppression and has frankly at times put the needs of bored middle-class housewives above the systematic racial oppression that women of color face.

It is easy, then, for a bunch of middle-class white women to get on a plane and fly to DC, protest, and go home, knowing that they're not going to get arrested under extremely questionable circumstances or attacked simply because they choose to wear a religious symbol. It is easy for them to support women such as Hilary Clinton and celebrities such as Amy Schumer, who have constantly displayed a brand of very white feminism. Schumer has previously suggested that men of color are more misogynistic than white men, yet despite her racist views, she was given a platform at the women's march.

It is easy, but it must stop. White feminists can no longer prioritize their well-being over the well-being of communities of color. While they fight for reproductive rights, they must also be fighting against mass incarceration, against drone strikes, against anti-refugee policies. Not doing so would be a repeat of history, and while mainstream white feminists may get what they want, they will not make any real change unless they work with women of color--and shun women (even if they are celebrities) who advocate for a white feminist agenda.

Caitlin Marie Grimes
University of South Florida
6095
Beyond The States