Why The Lessons In Disney's 'Moana' Are So Important
Odyssey

Why The Lessons In Disney's 'Moana' Are So Important

My favorite lessons I learned from "Moana." Spoiler alert! 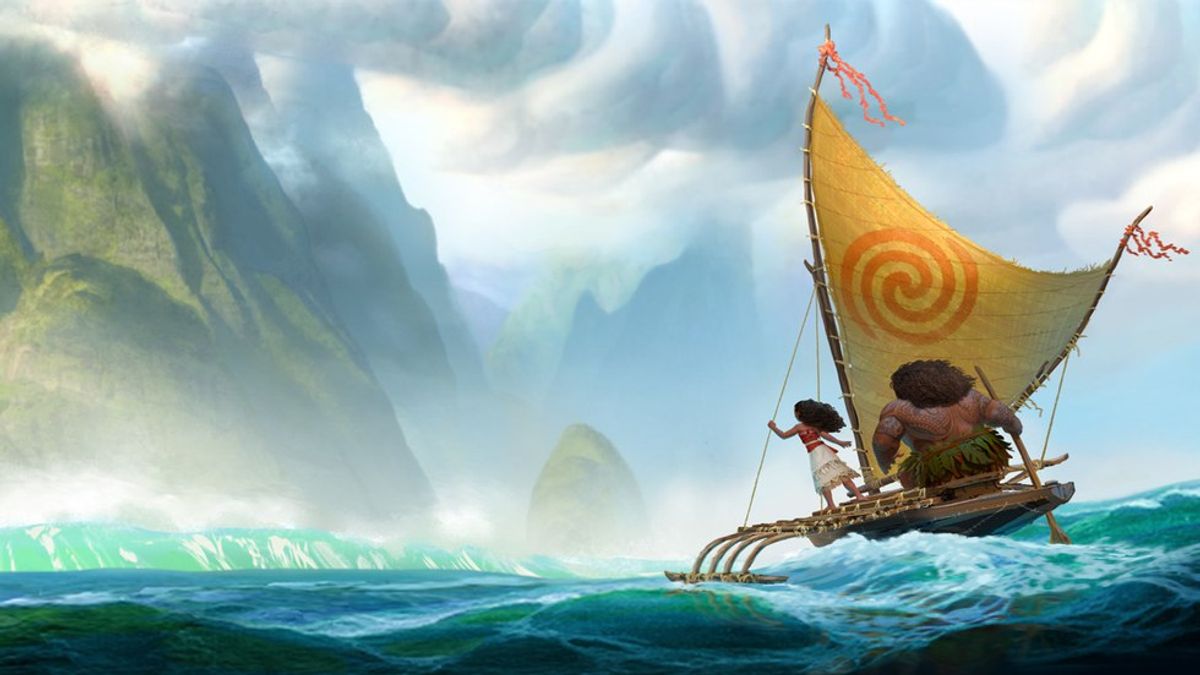 "Moana" is the newest movie to be released by Disney. It follows the journey of the daughter of the village Chief of Montunui, Moana, as she journeys across the great sea to save everything she has ever known. This movie is making waves for a number of reasons, varying from the animation style, the settings, the story, and even Moana herself! If you haven’t seen the movie yet, bookmark this article and go see it right now!

In the movie, Moana’s journey helps her to realize that she can be both a great leader and stay true to herself. This lesson comes in many forms. Moana learns very early in the movie that she must accept her role as leader to her people, and eventually decides to put her dreams aside to ensure her people are safe. Then, out of necessity, she ventures out, and through a series of battles, trials, and heartbreak, she realizes the kind of person she needs, and wants, to be. However, this is not determined solely from the journey she makes. In fact, the greatest lessons within the movie are taught through the people around her.

Moana's father, Chief Tui, stays true to the rules and laws that were put in place out of necessity long before. After fishermen and voyagers from the island stopped returning due to the dark and violent creatures that inhabited the sea, his predecessors went against the previous generations' ideals of voyaging because it was necessary to do so to preserve any semblance of their way of life. They hid the boats in a cavern on the island, closed it off, and started to forget about their heritage and past. This choice worked for generations and generations as was proven by the many rocks that the chiefs had set atop the sacred mountain.

The first song of the movie “Where You Are” is used to help Moana to understand that, although she is drawn to the sea she needs to stay where she is. They firmly believe that there is no need to leave the island or venture far from home. They are safe, well fed, happy, and live very nice and calm lives within the reef that surrounds the island. Everything and everyone has a role to play and Moana’s role is to become chief, regardless of her dreams of exploring the great sea.

We later learn that Moana's father once had the same will and determination as Moana. He was not content to sit on the island when there was so much more to explore. However, out of tragedy he grew scared of what was out there and since there was no necessity or reason to jeopardize anyone's safety again. Her father decided after that to take stock in what was around him; he learned how to appreciate where he was in the world, his island, his village, his role. However, when the reef begins to run out of fish, Moana attempts to convince her father that they should look beyond the reef for more fish only to be chastised. Chief Tui’s fear and desire to keep with their traditions makes him irrational and puts the whole island in jeopardy.

Moana's father and the other inhabitants of the island have a set mindset that has helped them and those before them to survive. Their ideals were developed out of necessity to protect them against what they believed to be dangerous and unforgiving. Then, Moana comes along and is set to inherit the role as chief and with it the ability to lead as she sees fit. A leader who, while a great problem solver, is full of stubbornness, pride, and new ideals. She is able to see the need to change the ways of her people and look to the future, by ensuring there will be them.

Moana wants to make her home a better place by making sure that she is true to herself while also filling her role in their society. She wants to ensure that her island stays safe and that the mistakes of those before do not make the future one of darkness, decay, and death. After an initial act of defiance that almost ends in tragedy, Moana makes the decision to stay on the island and obey her father’s wishes. That is, until she is given advice from her incredibly wise, hilarious, and a little crazy grandmother.

Gramma Tala continually tells Moana that, yes there are things that must be done, and there are roles that must be filled, but she cautions Moana to never lose sight of the "voice inside" because she knows herself, she knows Moana, and most of all, she knows her heritage. Tala doesn't just tell Moana to disobey her father's wishes. Instead, she takes Moana to the place where all of their heritage lies, the closed off cavern that houses the boats of her wayfinding ancestors. With her grandmother’s help, Moana begins to see that things have not always been this way and that there is a chance that things will not stay this way forever. Tala teaches Moana that our immediate relatives and living generations are not the only people we can turn to when figuring out who we are or what we are supposed to do. There are many people who have come before, and even if they are not here anymore they are still a part of us. Teaching us that to move toward the future, we must understand our past.

Last, but certainly not least, is Moana’s mother Sina. After Moana stands on the boat and tells her father that they must go beyond the reef for fish, she does not chastise her or tell her she is wrong. In fact, she explains to Moana that she understands that it is a good idea and Moana meant it to save the village. In contrast, she also tells Moana the story of how her father became so strict and fearful of the sea the tragedy of having his best friend’s death on his hands due to the sea’s unforgiving ways. She wants Moana to know that although she may be correct, she must also learn to understand the reasons why others believe what they believe. Only by understanding and empathizing with those around us can we really work together to find a solution to our problems.

Her final defining moment comes when Gramma Tala is lying on her deathbed. This is where Tala tells Moana that she must go, find Maui, and restore the Heart of Tafiti to save their island home. She listens to the reasoning and is open to understanding what needs to be done, although it is difficult to comprehend. When Moana's mother sees Moana running away, she doesn't try to stop her. In fact, without a single word being spoken she helps Moana pack and to know that although she is leaving, she is not alone. Sina trusts in the decisions of others. She trusts that these decisions are made for the right reasons, although it may be hard for her to completely understand.

We should all take a very important lesson that Moana teaches us. We all have experiences, beliefs, and desires that differ from one another. We must be able to learn and adapt to our experiences in order to protect ourselves and others like Chief Tui. We must learn to be happy in the role we have, without losing who we truly are like Moana. We must be able to turn to those who came before us for guidance and learn from them to help us find our way through life and determine who we are like Gramma Tala. And finally, we must listen, trust, and be open minded to the thoughts, ideas, and viewpoints of those around us like Sina. Using these few lessons, we can see how far we'll go. And we can get there together.