I Rushed For A Sorority, So Let Me Tell You What REALLY Happens
Odyssey

I Rushed For A Sorority, So Let Me Tell You What REALLY Happens

Hint; Its not at all what the movies portray. 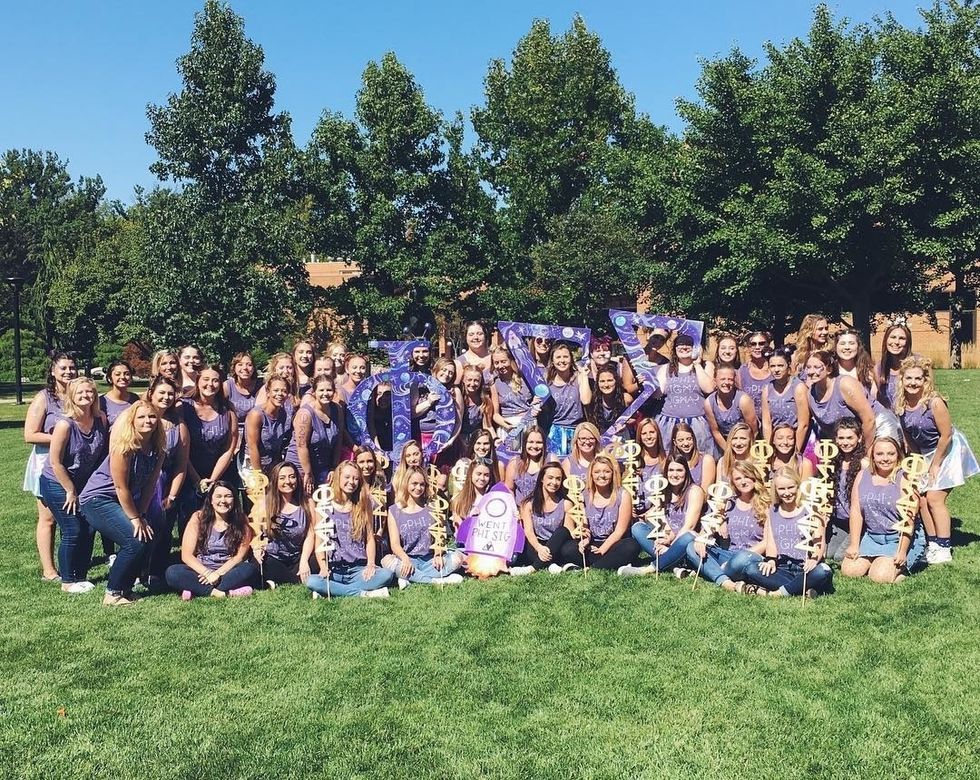 Sorority and fraternities are one of the most controversial subjects when it comes to college campuses. The media has portrayed them in a negative light. In movies, it's where you see all the parties being held, and the poor choices being made. I too was very skeptical of this world. As a third year in college, this year is crucial, four more classes and then its application time for the nursing program. Maybe it was curiosity, or maybe it was the idea of a sisterhood that got me interested in the idea of joining a sorority. As the last information night came, I decided to go. As I went to the information session, I was introduced to the three sororities on the SVSU campus: Phi Sigma Sigma, Kappa Tau Epsilon, and Alpha Sigma Alpha. We met our Rho Gammas - these are girls who have given up their letters, so they can be unbiased to those considering joining a sorority. My Rho Gammas were Nellie and Rachel. After that session I was conflicted, I didn't know what I wanted to do or if I should do it.

That night, I texted my best friend, I considered my options and asked the Rho Gammas questions. I wanted to know more. So the next day, was the first day of formal recruitment. How it worked, was I was able to meet all three sororities, I went to Phi Sigma Sigma first, it was overwhelming. There was chanting and girls taking you to sit at a table. From there we learned about Phi Sigma Sigma, we learned about there philanthropy, met the girls, and saw the recruitment video and so much more. Alpha Sigma Alpha and Kappa Tau Epsilon followed the same pattern, it was overwhelming but so exciting at the same time. I learned that sororities were not at all what the media tends to portray them as. So much of the information I was given was based on the love for philanthropy. At SVSU, going greek means your part of a community unlike no other. I was shocked and had my hesitations. I was nervous about how this would fit into my life.

As I went home that night, there wasn't any one thing I didn't like about any of the sororities. So I went back for recruitment day two. How that worked, was I met with all three sororities again. After that, I was to put in my preference. After that, I was to wait to see if I get an email saying I got invited to a preference party. That was the most nerve-wracking two hours, I took that time to get some lunch and study for my exam that I had Tuesday. Just because, I put in my preference doesn't always mean ill get an invite back. I packed some formal clothes just in case. Sure enough at three o'clock, I got an email saying I had been invited to least one preference party. They don't tell you which ones you got invited too. I got invited back two preference parties. But at that point, I felt like my decision was very clear.

After the parties were over, it was time to put who we would allow to send bids. If a person had two sororities invite them to there party, they could put both down. Or they could put one, but at this point, that doesn't always guarantee you a bid. Once you submit them, the waiting game comes into play.

By late that night, I should know if I had received a bid. Again, if two sororities were put down, the person won't know which sorority gave the bid until the next day.

Day three, bid day! I did receive an email stating I received a bid. I drove up to student life and started the process. How it works, is there is strict silence. So you're not influenced by others, we sit in a room, wait for everyone to go in and sign whether they would like to accept there bid, decline, or sit on there bid if they are unsure. It's strict silence, so I studied, played on my phone, pretty much did anything to pass time. Once everyone has signed, the fun part begins. They lined us up randomly and took us outside. The three sororities are waiting, - they don't know what decision we made yet. We have an MC and they announce each person's name, finally, they get to mine. They said "Next we have Haley Elliott. Haley who are you running home to today?" With a huge smile, I said "Phi Sigma Sigma". I ran and was engulfed by girls I would eventually know as sisters. But here's the crazy part, as an orientation leader. I had the pleasure of working check in with a girl named Rachel. I asked her if she enjoyed being in a sorority. We talked about it briefly then. As I am being greeted by all these girls, I see her. Rachel was in the same sorority, I ran home to that today.

I don't know what the future holds, but I know that from this experience alone my perspective on sororities and fraternities has forever changed. And I am apart of a sisterhood full of ladies who I can't wait to get to know more. I had the best Rho Gammas, and am blessed enough to call one of them my sister. Now I begin my process as a new member of Phi Sigma Sigma. It's nervewracking and exciting all rolled into one. But I'm ready for this chapter to begin in my life. I'm ready to tackle on my third year of college, to come back stronger than ever.