What Donald Trump's Abortion Comments Say About His Candidacy

What Donald Trump's Abortion Comments Say About His Candidacy

Trump's flip-flopping on the issues says more about his mindset than his policies, and that's a problem. 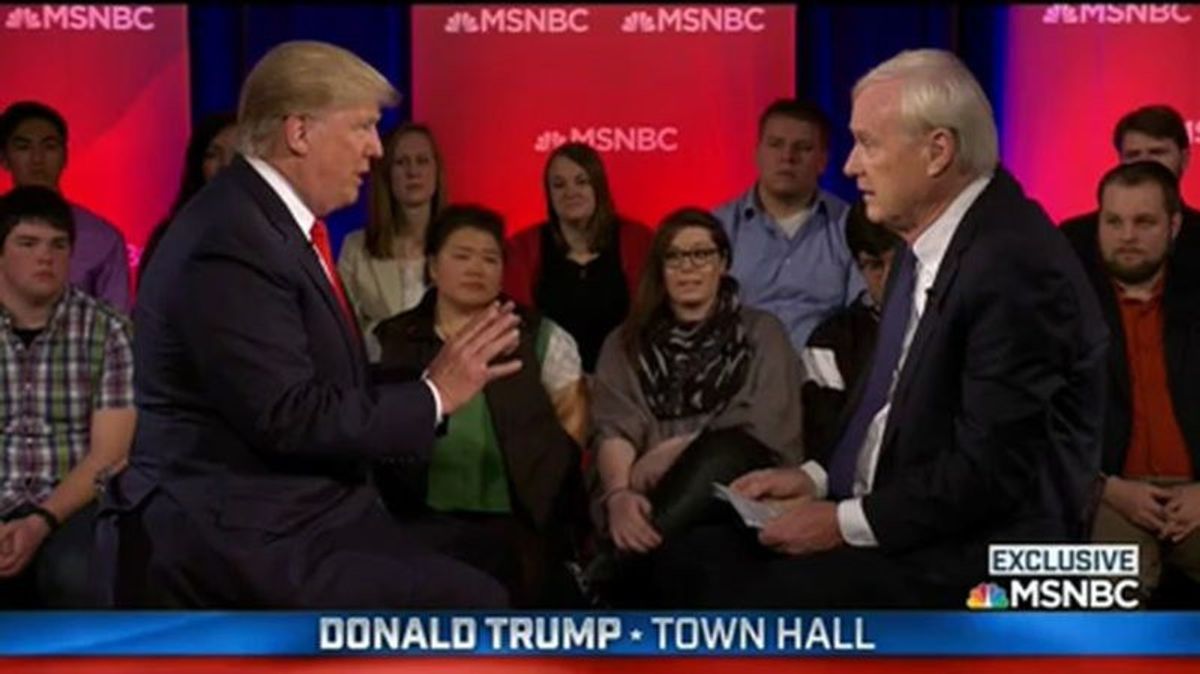 In an MSNBC town hall on Wednesday, Republican front-runner Donald Trump said that women who undergo abortions should receive some form of punishment.

In a presidential race that has the feeling of one of those dreams in which you’re running from a monster but can't move, Trump’s misstep on abortion seems to tip the scale. His opinion goes far beyond typical Republican responses to abortion, and his flip-flopping on a crucial social issue seems to have turned many people off. In a race that has been characterized by childish antics, political savagery and frat-like machismo, this is the straw that has broken the camel’s back.

But why? Why is abortion the one issue that seems to have made people wise to the threat that is Trump?

Trump, in a 1999 interview with Meet the Press, was adamantly pro-choice, but reversed his position as he began the process of securing the Republican nomination. He claims it was an evolution of the issue, which, to be fair, would be plausible for the average candidate. People evolve, issues come to light and opinions change. But this is far beyond someone “evolving” on the issues.

With his comments, and his subsequent hard reversal, Trump has alienated a core part of the Republican party—women. It’s clear that Trump has no idea what he's talking about, but his flip-flopping and his desire to dodge fundamental social issues means one thing—he has no idea what’s going on.

It’s one thing for a candidate to have strong positions on the issues—let us all keep in mind Zodiac Killer Ted Cruz—but at least he can defend his stances and keep to his principles. But pressing Donald Trump is like building a house of cards on a seesaw and then getting mad when the balance shifts.

We cannot have a president who does not know what’s going on. We cannot have a president who treats issues—issues that affect millions of people’s lives—as political Yu-Gi-Oh cards, trading for a better position. It’s been obvious since the beginning that Trump is a bully, but now it’s becoming clear that he wants to win more than he wants to be president. Being president, with all the grueling, tough moments that come along with it, almost seems like a byproduct for Trump. For him, this is the ultimate validation that he’s a “yooge” winner, and we—the American public—are just haters and losers. That’s the only binary in Trump’s rhetoric: winners and losers. He doesn’t understand compromise or the nuance of issues. He doesn’t understand that the issues he keeps flip-flopping on are precisely what he should be focusing on. For him, they’re inconsequential, an ever-changing rotation that he only sees as a means to the end—the White House.

He doesn’t care about abortion. He doesn’t care about marriage equality, or trade or education. He’ll say whatever, and do whatever, to get what he wants because he feels entitled to it. So he waffles and bullies and says things like, “He started it” and “The media hates me,” because in his black-and-white little brain, he views everyone who tests him—to see if he is a good candidate—as obstacles and roadblocks trying to stop him from getting what he wants.