Shock And Pure Happiness From The Washington Capitals Win

Warning: May cause side effects of sadness for any other NHL team fan. 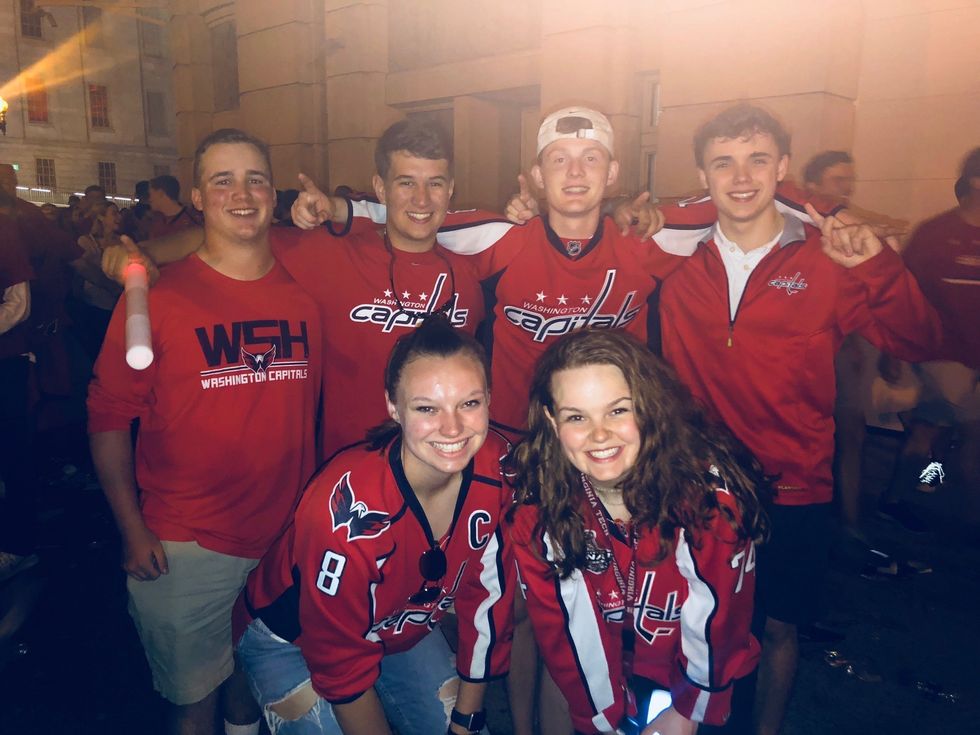 In December, I had met a family friend who was a big hockey fan that lived in Vegas. He was beside himself that his hometown had finally gotten a team. All night we talked about hockey. Right before we left the restaurant, he looked me in the eye and said "I'll see you in the Stanley Cup Final. You mark my words that the Caps and Knights are headed to the finals this year. Just you wait."


There is this feeling. You know, the one that you are in complete and utter shock and it just doesn't feel real? Well, that that's where I am at the moment. The last few days have honestly felt like a dream. I mean, the Washington Capitals won the Stanley Cup? Wait. A D.C. team won a championship? To be honest, it really hasn't set in for me yet. It all started off like a normal playoff run.

We Want Columbus and Pittsburg.

Our first challenge was the Columbus Blue Jackets and their crazy coach, John Tortorella. I was worried as the Jackets were a fantastic team and beat our butts in the first two games (see previous article). The worst part too was everyone knew if we beat the Blue Jackets we were going to be playing the Pittsburg Penguins. That was not something I was looking forward to. Everyone knows when you play against the Penguins, you not only play against their organization but the referees and Toronto (don't even fight me on this Penguin fans).

We won round one and we were off to playing the Penguins. Gasp! I know, what a surprise. When walking around Virginia Tech campus in my Caps jersey, I was met with the same old jeers from Penguin Fans. But I still believed in the Caps in the back of my mind. I arrived back home from college and was luckily able to attend game five at the Capital One Arena. It was absolutely crazy and we won. And two nights later the Capitals won in Pittsburg and had broken the 20-year curse (read more about it here).

We were now off to round three. Now this one was definitely going to be hard as hell. I mean it was embarrassing too as the coach of the Tampa Bay Lightning was originally supposed to be our coach and they had Steven Stamkos fully healthy. Series three did prove to be difficult with us going to game seven. I was lucky enough to be watching the viewing party at Capital One Arena hosted with a small crowd for game seven (these numbers would later grow in the last round). I could not believe that we would be moving on. I mean, sure I had hoped but it just felt like a dreamscape (see more here).

During the Caps first two rounds, I was keeping my eye on my other favorite teams. The Sharks were taken down by the Knights and the Predators also had lost. But I still liked Vegas for the fact that one of the old Capitals players was on the team, Nate Schmidt, number 88. And when it was our two teams in the final, well let's just say I was SHOOK. The first two games I loaded into the car with my three good friends and we went downtown to watch on the big screen. There was a huge jump of the number of fans from the game seven viewing party to the game one viewing party.

It was crazy and so much fun, even if we lost the first game. One of the coolest things though, was that the Caps have started playing Enter Sandman in the last few minutes of the third period. It really helps connect all the Hokies around the stadium. For game three and four, the streets were filled with people and inside the stadium there was an electric feeling with glowing sticks. It was amazing. We totally took the hockey world by a storm and were playing game in Vegas for the Cup. As I was surrounded by fans, bandwagon fans (shout out to all the Wizards and Nationals shirts I saw), and just people who wanted to believe, I was so overcome. For the first time watching this team, I was finally able to cry happy tears. WE HAD WON!

A Few Final Things to Note On:

In all 47 seasons, the Washington Capitals have qualified 27 times for the Stanley Cup and for the first time they have succeeded.

If you have not watched T.J. Oshie talk about what this win means for him and especially his father, I highly recommend watching it.

Yes, I understand the Capitals may be going crazy but would you ever see Crosby doing a keg stand out of the cup (Ovi did). It's fantastic that the players want to share this win with all of us by swimming in the Georgetown fountains.

The Parade is on Tuesday the 12th starting at 11 am. You should go.

Hockey is almost a yearlong sport beginning in October (if you don't count preseason in September) and going all the way to the beginning of June. You can continue to support the team all year instead of when we just win *cough cough bandwagon fans* I'm just kidding but not really.

It is ok to say that it is our year now. Its ok to finally breath and believe although it still doesn't feel real.

washington capitals
Report this Content
This article has not been reviewed by Odyssey HQ and solely reflects the ideas and opinions of the creator.